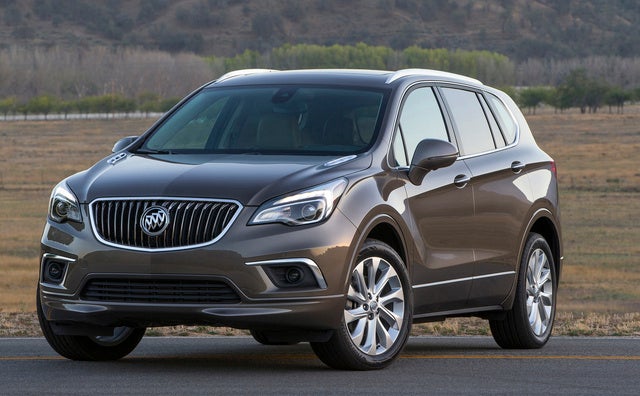 After a successful debut in the Chinese market, the all-new 2016 Buick Envision will arrive in the States in the second quarter of 2016. The midsize luxury crossover will enter Buick’s growing lineup like a lost puzzle piece, fitting snugly between the current SUV choices, the 3-row Enclave and the compact Encore.

The Envision rides atop a brand new GM global platform that will also be the foundation for the next-generation GMC Terrain and Chevrolet Equinox. That new platform, and the rest of the Envision, will be manufactured in GM’s plant in Yantai, China. This represents the first time a Detroit automaker has imported a vehicle from China, according to The Detroit News, although GM is quick to point out that the vehicle was designed, engineered, and tested in Michigan.

That design process was unimpeded by past models, yet the Envision looks a lot like most SUVs. Still, the enticing character lines, flowing front lights, LED rear accents, and spoiler do give the Envision a certain athleticism and panache.

The Chinese version of the Envision has two engine choices, but the U.S. model comes with only one powertrain: a turbocharged 2.0-liter I4 that generates 252 hp and 260 lb-ft of torque. It’s mated to a 6-speed automatic transmission, can tow up to 1,500 pounds, and rests on a hydraulically dampened substructure to minimize vibration and noise.

Mileage numbers have not been released for the Envision, but it does feature some efficiency-improving technology like an active grille shutter that closes at high speeds, mass-reducing high-strength steel, an aluminum hood, and a Stop/Go system that shuts down the engine at stop lights or during other low-use times.

The Envision comes standard with an intelligent twin-clutch all-wheel-drive (AWD) system that automatically shifts torque between the front and rear wheels, as well as between the two rear wheels, to ensure the safest and most comfortable ride, even in difficult conditions. That comfort will be increased by a fully-independent 4-link rear suspension, HiPer Strut front suspension with hydraulic ride bushings, and a full front subframe. And you can personalize your driving experience by choosing one of four driving modes offered by the FlexRide system: Normal, Tour, Sport, and Off-Road.

Inside, the 5-passenger Envision offers 26.9 cubic feet of cargo space behind the second row of seats and 57.3 cubic feet when those 60/40-split seats are folded flat. A “floating” wraparound instrument panel flows into the door panels, creating a modern feel as soon as you enter the cabin. The black piano accents, dual-stitching, and soft-touch materials complete the luxurious feel.

What's your take on the 2016 Buick Envision?

Have you driven a 2016 Buick Envision?
Rank This Car