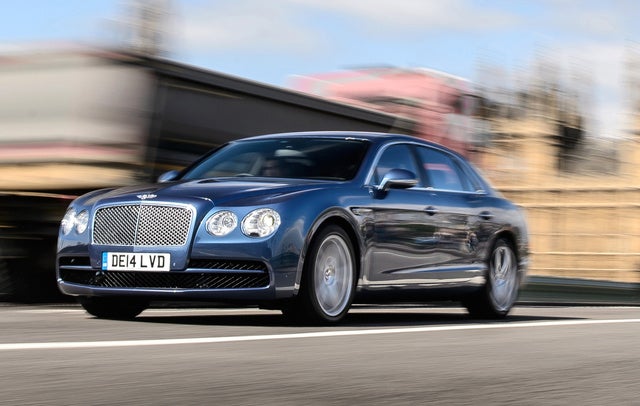 If you have a $200,000 car budget, your choices aren't exactly limited. But if you’re searching for the extreme end of elegance and taste, you’ll want to consider the 2016 Bentley Flying Spur.

The 4-door, 5-passenger Flying Spur was given a makeover in 2014, pulling off an update on timeless grace. Then a V8 model was added to the lineup last year, much to the delight of critics. But there are few changes for 2016. The W12 does get some variable displacement technology to nudge its fuel efficiency upwards, and there are two new wheel options and two new interior leather color choices (Camel and Shortbread).

The W12's 12 pistons are, in fact, aligned in the shape of a W. This 6.0-liter twin turbo powerhouse produces 616 horsepower and 590 lb-ft of torque that’s delivered to all four wheels by an 8-speed automatic transmission with shift control. All that juice pushes the 5,450-pound sedan from 0-60 mph in a stunning 4.3 seconds. You do pay for that power with efficiency (12 mpg city/20highway/15 combined), however, even with the new displacement technology that shuts down half the cylinders at times when six will do.

The V8 trim shares the W12’s all-wheel drive and 8-speed transmission, but it’s powered by the celebrated 4.0-liter twin turbo V8, which still cranks out 500 horsepower and 487 lb-ft of torque, launching the Flying Spur from standing to 60 mph in 4.8 seconds. The fuel efficiency (14/24/17) isn’t much better than the W12, but the V8 is more fun to drive. Of course, that’s assuming you plan on driving the Flying Spur rather than being chauffeured around in it.

The smaller engine delivers a quicker throttle response and has less lag than the W12, and to some critics' ears it has a more natural, and thus pleasing, sound. The V8 is also about 300 pounds lighter than W12, which means it handles with a touch more ease and sharpness through corners. But no matter which engine or trim you choose, the air suspension offers a cushy ride that you can adjust through four settings.

The interior of the Flying Spur is sophistication personified. The deluxe sound insulation keeps you in your own Bentley world, which is of course layered in the softest leather, genuine wood, and tasteful chrome. Standard infotainment features include Bluetooth, integrated HD navigation with 3D, WiFi hotspot capability, a front LCD monitor, an A/V remote for the rear, and an 8-speaker sound system with in-dash DVD, color touch screen, and an amplifier. And since you’re already spending the money, why not opt for the Naim Surround Sound system and its 11 custom-built Balanced Mode Radiator Speakers? It’s the Bentley of sound systems.

Other standard features include heated and ventilated 10-way power seats for the driver and passenger, dual zone front and rear automatic climate control, rear HVAC (with separate control and ducts under the seats and in the headliner), heated rear bench or 14-way power bucket rear seats, and a full carpet floor covering. The W12 has a few upgrades, including 20-inch 5-spoke wheels, a chrome insert on the front bumper, a full leather headliner, and 4-way power lumbar support for the rear bench.

But no matter what you want as features on the Flying Spur - from any color you can dream of to tablet docks and walnut picnic tables for the rear passengers - chances are good Bentley will provide it.

There are no crash test ratings for the Flying Spur because, really, who has the heart (or wallet) to crash a vehicle like this? But there are plenty of safety features - 4-wheel anti-lock brakes, stability control, traction control, side impact beams, tire pressure warning, and the full array of airbags.

What's your take on the 2016 Bentley Flying Spur?

GuruTNYND This car is beautiful, without question. Did they do something new with the back lights?

Have you driven a 2016 Bentley Flying Spur?
Rank This Car