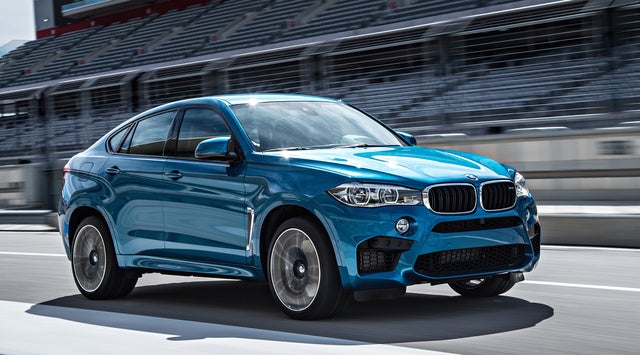 It could be the most pointless vehicle that BMW has ever made, but the X6 M has sold remarkably well and is an undeniably impressive performer. It, and the closely related X5 M that is built at the same South Carolina factory, have proven to be successful blends of SUV-level comfort and savage performance, and both are moving to new iterations for 2016.

Introduced as a “Sports Activity Coupe”, the X6 isn't much more than an X5 with some of the roofline shaved off, and the performance-oriented M version is also set apart by more aggressive front fascia, new M-specific forged 21-inch alloy wheels, quad exhaust tips, a rear spoiler, and plenty of M badges. New colors include Long Beach Blue Metallic and Donington Grey Metallic. Despite having less room, the X6 M costs a few grand more than its X5 stablemate, with an MSRP that breaks the six-figure mark at $102,200.

BMW’s marvelous S63 V8, which displaces 4.4 liters and is boosted by two turbochargers, makes an incredible 567 hp and 553 lb-ft of torque, enough to bring the 5,000 lb-plus vehicle from 0-60 in four seconds flat and give the X6 M an impressive towing capacity of 5,952 pounds. Fuel economy is an unremarkable 14 mpg city/19 highway, but BMW does boast that it's a 20% improvement over the last model. The 8-speed Steptronic transmission with automatic and manual modes is a newer design and said to be a significant improvement over the previous 8-speed.

The all-wheel drive X6 M will perform surprisingly well in a straight line; but its performance in the corners is even more shocking. Like the X5 M, it remains flat in corners and despite its mass will change direction with all the swiftness that you’d expect from an M car. Economy, comfort and sport driving modes adjust engine management and suspension stiffness and should be familiar to anyone who’s owned a BMW in recent years, but the M version also comes with launch control for quick getaways. The xDrive all-wheel drive system can send all of the engine’s torque to the rear wheels, and the vehicle’s Dynamic Stability Control will keep you from letting all that torque get away from you. Even when it’s turned off, it will step in for extreme situations involving lost traction--so it looks like excessive burnouts are out of the picture.

An impressive blend of sportiness and expensive luxury, the interior of the X6 M is an attractive place to be, with an M-specific instrument cluster, footrest, display screen, leather steering wheel, and aluminum paddle shifters and shift knob. Also included are a navigation system with voice activation, a touch screen display, Harman/Kardon premium speakers, and a rear view camera.

The biggest problem with the X6, when compared to the X5, is actually what differentiates the two vehicles in the first place: the sloping roofline. In the X6, the slope starts at the B-pillar. That means that rear seat headroom is diminished and that the amount of rear cargo room under the tapered tail is almost laughably small for such a large automobile. And all the usable room from the X5 that was sacrificed in the X6 was done for a styling element that doesn’t really make it any more attractive. Styling is subjective, however, and tens of thousands of buyers have been willing to sacrifice the cargo room and the extra money for the X6.

Like the X5 M, the X6 M appeals to the kind of driver who likes the feel and raised driving position of an SUV, but wants face-melting performance on top of it all. One difference is that the X6 M buyer is willing to sacrifice practicality for style and exclusivity, since the shape of the X6 admittedly draws the eye more than the more conventionally shaped X5, and since no other manufacturer makes anything quite like it.

Users ranked 2016 BMW X6 M against other cars which they drove/owned. Each ranking was based on 9 categories. Here is the summary of top rankings.