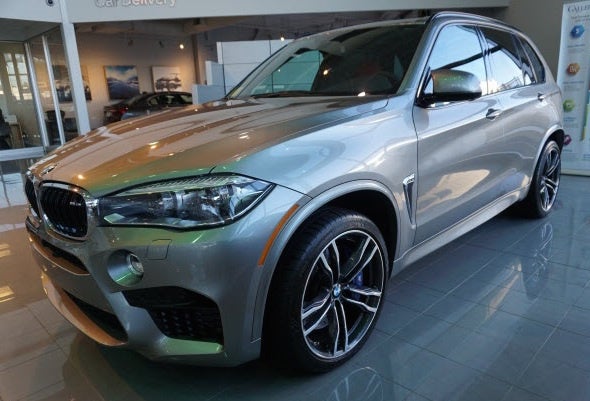 The BMW X5 M was first available for the 2010 model year after being introduced at the 2009 New York Auto Show, and was created as BMW’s answer to performance SUVs like the Mercedes-Benz ML63 AMG and Porsche Cayenne. It surprised some with its ability to blend the X5's utility and cargo space with the incredible performance magic of BMW’s M cars--these had previously been more or less separate spheres. This paradoxical formula of making a vehicle that’s not a performance car but still has a ton of performance has been a successful one, however, and both the X5 M and related X6 M (built at the same South Carolina factory) move into their next iteration for 2016.

The basic shape of the 2016 BMW X5 M is the same as the model it replaces, but with more aggressive styling cues up front and M-specific 21-inch forged alloy wheels. What really sets it apart from the regular X5 (other than ample M badging) are the more aggressive front fascia, side scoops, rear diffuser, and quad exhaust tips. Two new colors, Long Beach Blue Metallic and Donington Grey Metallic, are also available. There is only one trim level, and it starts at $98,800. The X5 M doesn’t lose any of the regular X5's luxury for the sake its of performance, and being inside can actually feel like more of an occasion thanks to all of the M-specific interior features. But the performance is what makes this thing such a remarkable surprise. Like the Cayenne, it has all the look of a nice SUV, complete with a gigantic curb weight (5,299 pounds), but it will outrun lots of dedicated performance cars, both in a straight line and around a racetrack.

The X5 M's 4.4-liter twin-turbo V-8, which is related to the S63 powerplant used in the M5 and M6, makes 567 hp and 553 lb-ft of torque, enough to overcome the BMW's tremendous weight and catapult it from 0-60 mph in four seconds flat. That kind of stump-pulling torque is also enough to give the X5 M a towing capacity of up to 5,952 pounds. Predictably, top speed is limited to 155 mph. Fuel economy is a 20% improvement over previous models, although it’s still less than stellar at 14 mpg city/19 highway. The 8-speed Steptronic transmission with automatic and manual modes is a newer design and is said to be a significant improvement over the previous 8-speed.

The all-wheel drive X5 M is a deceptively nimble vehicle that produces surprisingly little body roll in the corners, a testament to the engineering talent at BMW’s M division, who are as good with suspension as they are with engines. The economy, comfort, and sport driving modes will be familiar to most BMW buyers, but the X5 M also comes with launch control for quick getaways. The xDrive all-wheel drive system can send all of the engine’s torque to the rear wheels, and the vehicle’s Dynamic Stability Control will keep you from letting all that torque get away from you. Even when it’s turned off, it will step in for extreme situations involving lost traction--so it looks like excessive burnouts are out of the picture.

The inside of the X5 M gets an M-specific instrument cluster, footrest, display screen, leather steering wheel, and aluminum paddle shifters and shift knob. Also included are a navigation system with voice activation and a touch screen display. Leather seats are of course standard, and overall the interior is the blend of sportiness and expensive luxury that has characterized BMW M cars for some years now.

The X5 M is a vehicle with real usable room inside and good looks on the outside (considering what it is), but what really sets it apart despite being an SUV is its savage performance, which is undeniably impressive. People drawn to it will mostly be those who prefer the feel of an SUV but also like to go fast, since dedicated driving enthusiasts will stick to the more traditional M cars that stay lower to the ground.

Users ranked 2016 BMW X5 M against other cars which they drove/owned. Each ranking was based on 9 categories. Here is the summary of top rankings.