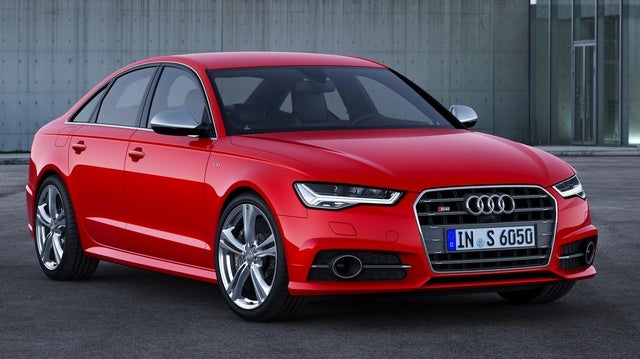 Trying to read the mind of a midsize Audi sedan shopper, we ask the question, why the 2016 Audi S6? Mainly two reasons. First, for some reason the buyer does not like the Audi A7, which is unique, gorgeous, and almost identical to the A6 mechanically. Second, because the A6 may not seem to be a good value or very special. There might also be a third reason, and that might be that more exotic Audi sedans don’t offer much more real-life performance and require more ownership sacrifices.

The 2016 Audi S6 is the latest in a very long and distinguished line of high-performance A6 models Audi has made for about 20 years. The 2016 S6 is a mid-cycle refresh with some changes to the skin and also under the skin about which shoppers will want to know. What has not changed is its classy exterior look, top-notch interior, and Quattro all-wheel drive, and it still has a V8—in this case, turbocharged.

The exterior of the S6 evolves so slowly one needs time-lapse photography to see any changes. For 2016, the grill gets even more pronounced, remains almost vertical, and now has a slightly bolder bumper surrounding it. The Xenon or optional LED lights are tweaked a bit, but the look from the front is still all Audi. When this car approaches you from the rear, it could be a TT back there or an S8. One won’t know until it's close. The side sills are a bit sleeker this year, and in back the rear taillights are a bit sharper. Only Audi owners and dealers will be able to spot these incremental changes. That's the intent. Under the skin Audi continues to increase the use of aluminum and other light metals, but the S6 is by no means “an aluminum car.”

The biggest difference between an A6 and an S6 is that the S6 has a V8, turbocharged engine. Audi calls the engine a TFSI, an acronym that translates from German into “Turbocharged, Direct Injected, Uses Gasoline, and F.” For 2016, the 4.0-liter engine gets a substantial boost in power to a total of 450 hp. Its 406 lb-ft of torque makes that power feel even greater at launch, but when cruising, the Audi S6 can disable some of its cylinders to save gasoline.

Audi was able to increase the fuel economy of the S6 for 2016 while still adding this power. The EPA now estimates the S6 will return 18 mpg city/27 highway/21 combined. That is a 1 mpg improvement over last year for both city and overall fuel economy, and it corresponds to a 4% reduction in CO2 production. For a sedan this size, that combined fuel-economy number is nothing to brag about, but for a sedan this size with this level of performance, it sure is.

The 2016 S6 is Quattro all-wheel-drive equipped standard. Also standard is Audi’s popular 7-speed, dual-clutch automatic transmission (DCT). Users love having the ability to shift this transmission themselves or leave the selector in automatic mode. Recent tests of Audi products have revealed that the quirkiness of the DCT when in auto has been eliminated. A sport differential is optional.

Audi’s interiors continue to be some of the best in the world. In the 2016 S6, the infotainment screen rises from the dash and sits there with the look of an aftermarket TomTom system. Some love this look, others not so much. Almost everyone does love the Audi MMI system. It's a rotary knob that acts as your mouse. A smaller knob sits just up and to the right of the main knob and acts as the volume and on-off control. That small knob will become your best friend. Only Audi and Mazda offer this arrangement, and it should be copied by all automakers that don’t go the touchscreen route. The S6 also offers a corner-view back-up camera that lets you see what's coming as you back out and a top-view angle to see around you, say when parking between an SUV and a pillar in a dimly lit garage. Night vision and a head-up display round out the tech options.

A car this size, price, and style should be the safest on the road, and the 2016 S6 may well be. The S6 (tested as the A6) aced all its IIHS crash tests and is available with advanced forward-collision prevention. Thus, it has earned the highest safety rating in the industry: Top Safety Pick Plus.

The 2016 S6 offers its driver the thrust of a turbocharged V8, the handling of a sports car, the functionality of a midsize/large sedan, and the comfort of a luxury German touring car. Starting prices are in the low $70K range.

golflaw1 I drove it. I ordered it. Period. Fantastically comfortable, lightning quick, cozy at CA bumper to bumper driving grind, and totally fun on curvy open roads. Drives much smaller than it is. An executive touring car when you want it; a beast when you put your foot into it. Not cheap, but I see nothing of real quality that competes. That means you BMW, Mercedes. Best interior in an automobile without exception. Super quiet, super fast. Bring cash.

madaboutcars Totally agree. Amazing car. The matrix headlights are superb and top off an incredible experience driving this car. No regrets buying one...