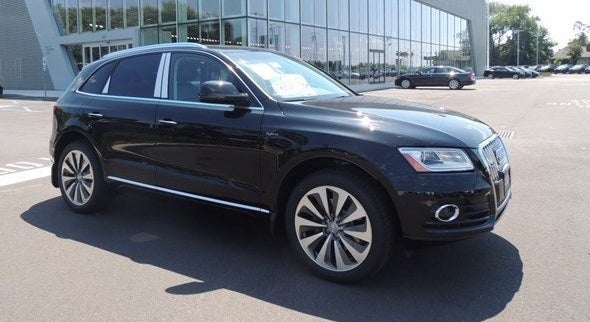 It’s no secret that the rise in popularity of SUVs has been driven by years of complaints about minivans. The 2016 Audi Q5 Hybrid marks the latest evolutionary step in that “for every action there is an equal and opposite reaction” process. The Q5 Hybrid epitomizes everything the minivan is not—easy on the eyes, smooth to drive, and fuel efficient—and still works as a family-oriented vehicle good for hauling kids, cargo, or any combination of the two.

All 2016 Q5 models, representing the SUV’s second generation, will now be produced in San Jose, Mexico. The production move from the Ingolstadt, Germany, facility has raised a few eyebrows among critics, but most believe Audi has the sense, and wherewithal, to ensure its high standard of quality and attention to detail travels across the Atlantic along with its production plants.

Like the other Q5 model, the Q5 Hybrid gets some significant updates for 2016. First, the SUV will lose about 220 pounds of total weight and improve its handling and efficiency with a new, lightweight MLB-evo platform. The exterior styling lines have also been tweaked to give the Q5 Hybrid a sharper look, which includes narrowing the headlights. Those new lights complement the new grille, which remains the same size but now has horizontal bars running across it instead of vertical ones.

The Q5 Hybrid’s cabin has been made cleaner and more user-friendly with the latest revisions, which echo the changes made to the new Audi TT. The more straightforward cabin also gets infotainment updates with a new MMI Navigation Plus system with voice control that includes Audi Connect and features 4G connectivity for up to 8 wireless devices, Google Earth satellite imagery, traffic information, weather updates, and social-media integration. And all that new technology comes standard with the Q5 Hybrid.

What truly sets this Q5 apart from the other Q5s can be found, of course, under the hood. The 2.0-liter, turbocharged 4-cylinder TFSI gas engine is paired with a 54-hp, water-cooled, three-phase AC electric motor (powered by a 266-volt lithium-ion battery system) to generate a total of 245 hp and 354 lb-ft of torque. The efficiency numbers for the 2016 Q5 Hybrid haven’t been released, but last year’s model got 26 mpg city/20 highway/24 combined mpg, and those numbers should improve slightly with the new, lightweight platform.

That platform may also improve the vehicle’s speed numbers (last year’s model got from 0 to 60 mph in 6.8 seconds and had a top track speed of 130 mph) as well as its handling, which was already nimble. The only transmission option is an 8-speed Tiptronic automatic with Audi’s highly regarded quattro all-wheel drive (AWD), which automatically sends power to the tires that need it most and increases driver control in any weather conditions.

Crash test results have not been compiled for the 2016 Q5s, but last year’s version received a Top Safety Pick+ rating by the Insurance Institute for Highway Safety, the top rating given by the IIHS. Standard safety features include stability control, traction control, antilock brakes, brake assist, tire pressure monitoring, and a full complement of air bags.