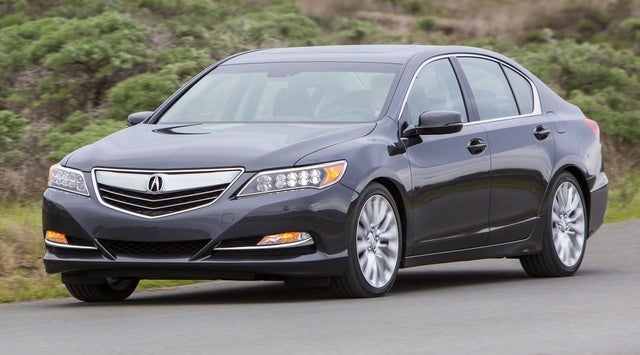 For a couple of years now, Acura’s posh RLX has been the flagship sedan of this high-end Honda subsidiary. A well-wrought 5-passenger full-size 4-door, which is already in dealer showrooms across the nation, the RLX gets a few upgrades for the upcoming model year, including the brand new AcuraWatch safety and driver assistance technology.

The former base RLX and its RLX with Navigation sibling, furthermore, are officially defunct for 2016. The trim lineup now includes the RLX with Technology Package and the RLX with Advance Package. Depending on the trim selected, enhancements for 2016 include the aforementioned AcuraWatch feature, a new around-view camera system, noise- and vibration-reducing upgrades, refined ride and comfort components (including touring-oriented rear shocks and springs), and an optional Slate Silver Metallic exterior color.

Although it’s long been touted as spacious and plush, the 2016 RLX offers a dearth of headroom for rear passengers, while the rear seatbacks don’t fold flat, thus what you see of the 15.3 cubic feet of trunk space is what you get. However, long, slender items, like skis, can be packed inside using the rear center pass-through feature.

Again powering both trims is the capable 3.5-liter V6 engine that mates with a standard 6-speed shiftable automatic transmission managing 310 hp and 272 lb-ft of torque. Look for estimated mileage, meantime, to return at 20 mpg city/31 highway/24 combined from the front-wheel-drive-only (FWD) trims.

Despite rumors that the RLX with Krell Audio Package is no longer offered as a separate trim, this premium 14-speaker entertainment system remains a noteworthy option that’s offered lineup-wide.

These tweaks to the 2016 RLX are admittedly an effort to bolster this princely yet underappreciated luxury liner’s less-than-stellar sales numbers. Owner reviews of previous RLX iterations, furthermore, are divided between unadulterated praise and concerns about reliability. In any case, Acura wants the latest edition of its brand-topping 4-door to do a bit better against the likes of Audi’s traditionally awesome A6, Lincoln’s lithesome MKS, and Hyundai’s head-turning Genesis.

TheHorror Acura's own TLX looks very similar, is nearly as large, and with the V6, offers nearly as much power. Most importantly, it does so for $10k less. There is no excuse for a car that is merely mediocre, when it begins at $50k. It looks even worse for the RLX when you start to consider the competition from other manufacturers.

Users ranked 2016 Acura RLX against other cars which they drove/owned. Each ranking was based on 9 categories. Here is the summary of top rankings.

Have you driven a 2016 Acura RLX?
Rank This Car