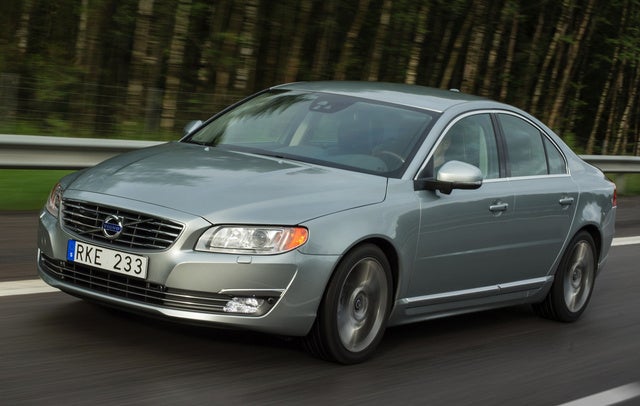 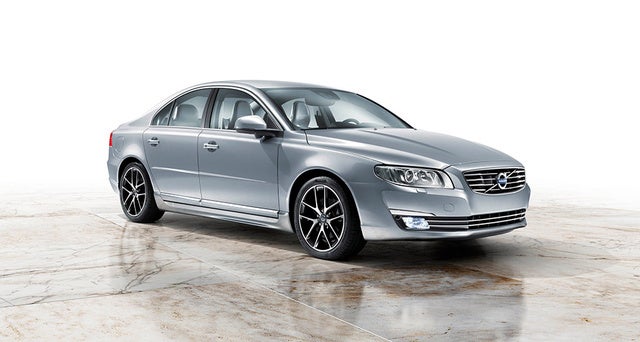 Alas, poor Volvo. The (Chinese-owned) Swedish automaker recently refreshed its S80 5-passenger sedan, yet it remains an also-ran in the midsize luxury 4-door market even into the 2015 model year. Since Volvo’s once-legendary standard safety features are now equaled or even surpassed by a majority of rivals, the Swedes have had to scramble to improve looks, power and mileage numbers, not to mention cabin ambiance and creature comforts to make its flagship S80 stand out. Thus, for 2015, a new powertrain offering begets a new base trim designation, the S80 T5 Drive-E, to go along with the top-shelf, all-wheel-drive-packing T6 AWD. Additionally, a new Inscription Package also debuts as an option for this latest T6 AWD iteration.

Despite these updates and the fact that the S80 lineup features a roomy 14.9 cubic feet of trunk space that’s bolstered by split-folding rear seatbacks as well as an optional fold-flat front passenger seat, Volvo’s high-end sedan still comes up short against such legends as BMW’s 5 Series, Mercedes-Benz’s E-Class and Audi’s A6. Face it, though it remains a reliable manufacturer of high-end automobiles, Volvo will need to use even more of its Asian money in trying to get this still-staid 4-door up to modern-day standards.

Anyhow, with the introduction of a 2.0-liter turbocharged inline 4-cylinder (I4) powerplant now standard in the necessarily renamed base 2015 T5 Drive-E trim, Volvo has taken a giant stride toward improving what had been some woefully inadequate mileage numbers. This debuting blown 4-banger mates with a new-for-2015 8-speed auto-manual transmission to put down 240 hp and 258 lb-ft of torque, all the while flaunting auto engine stop/start technology and a selectable Eco mode built into the 8-speed automatic. Look for a distinctly un-Volvo-like 25 mpg city/37 highway from the new Drive-E powerplant, and heck, even towing capacity remains a hefty 3,500 pounds with the proper equipment.

The T6 AWD, meantime, returns carrying the tried-and-true 3.0-liter turbocharged inline 6-cylinder (I6) engine of yore along with the traditional 6-speed shiftable automatic transmission. Power numbers remain 300 hp and 325 lb-ft of torque, while mileage estimates remain 19/25. Again, the properly equipped T6 AWD can tow up to 3,500 pounds of trailer.

Optional equipment now includes, as mentioned, a new Inscription Package available only to the top-level T6 AWD. This classy add-on flaunts, besides ventilated front seats, upgraded leather upholstery in a variety of colors as well as unique stitching and trim-specific designs. Of course, the Premier Plus and Platinum packages remain available to both trims and upgrade each to a specific sub-trim, with the former boasting a rear-view camera, front and rear parking sensors, a remote garage door opener and a fold-flat front passenger seat, and the latter adding a navigation system with real-time traffic and a DVD player. The Climate Package, again available to both 2015 S80 trims, offers heated front and rear seats and a heated steering wheel.

Finally, standard safety items, many of which were introduced via this sturdy Swedish brand back in its original incarnation, have since been equaled or eclipsed by the competition. Nevertheless, look for 4-wheel antilock brakes (ABS), traction and stability control, front and rear head airbags, front side-mounted airbags and active front headrests to return aboard the 2015 S80. Additionally, this high-end 4-door adds standard LED running lights, front fog/driving lights, turn-signal-integrated mirrors, a pre-collision safety system and a remote antitheft alarm. Furthermore, both trims can again be equipped with an optional Blind Spot Information System (BLIS), as well as the available Technology Package featuring adaptive cruise control with collision braking, a pedestrian detection system, lane-departure warnings, a driver-alert seat and active high beams.

Bozlee854 Hello! My name is Carolyn Walker. I have only wanted a Volvo since like forever. A friend of mine owned a Volvo and I fell in love with the quality of it's features, quality material and parts, and how easy it was to manage on the road. That was many years ago. I can only imagine what the updated versions have to offer. I am 60 years old now with bad credit (due to life circumstances) and drive an ollllld faded faithful vehicle with bad brakes, broken windows and no air. How about I live in Florida. LOL...go figure. Would you like to start my new year (2015) off with a BANG! by donating a Volvo (automatic; silver or black) to me to fulfill a dream come true. I can be reached @ cywalker854@yahoo.com Thanking you in advance. Pssst...(I really do believe in miracles). HAPPY NEW YEAR! :)