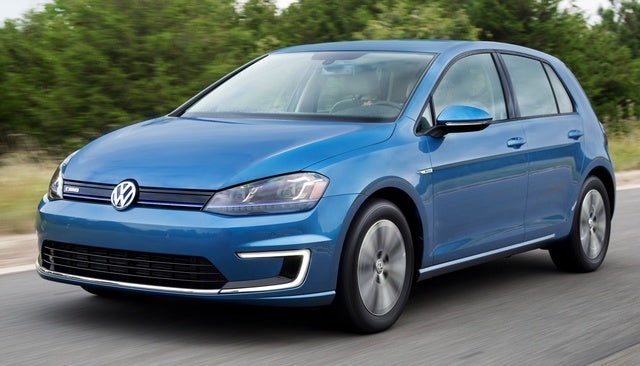 Looking for a Used e-Golf in your area? 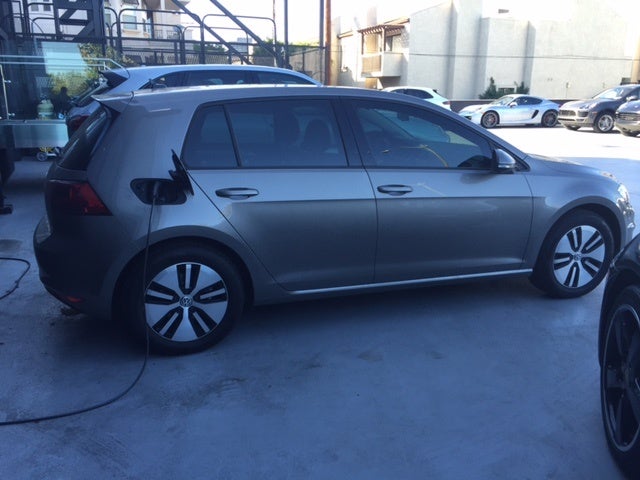 They’re kind of pokey, they take forever to charge, range is still fairly limited and the typical MSRP is considerably higher than the average gasoline-burning compact family automobile's, but the all-electric commuter car is, like it or not, the wave of the future. A sure sign of this trend is the U.S. debut of Volkswagen’s e-Golf for the 2015 model year. This 5-seat, 5-door all-electric compact hatchback is touted by Vee Dub, not to mention most reviewers, as an eco-friendly complement to the regular-carbon-footprint-toting Golf lineup. Additionally, both the automaker and the media tout not only similar handling attributes to the ordinary Golf, as well as the expected boatload of standard appearance bling and creature comforts, but also the instantaneous acceleration of an all-electric vehicle (EV).

For 2015, the new e-Golf will be delivered in a single trim, labeled, appropriately, the SEL Premium, and it’s slated to be delivered only in front-wheel-drive (FWD) configuration. Cabin room is touted to be similar to that of the gas- and diesel-burning Golf iterations, as is the e-Golf’s 22.8 cubic feet of cargo space behind the rear seatbacks and its fairly hefty 52.7 cubes of acreage with said rear seatbacks folded.

Getting down to the nitty-gritty, look for the new-wave-ready e-Golf to pack an 85-kilowatt AC synchronous electric motor capable of 115 hp and 199 lb-ft of torque. Equipped with a single-speed direct-drive transmission, this electrified and electrifying hatchback is claimed to have a range of 70 to 90 miles on a full charge of the 24.2kWh (kilowatt/hour) lithium ion battery. The transmission setup, meantime, offers a pair of driver-selectable settings, Eco and Eco Plus, that feed either your need for speed or your craving for range. Additionally, 4 selectable regenerative braking modes—D1 to D3, and B—played in combination with the Eco and Eco Plus settings can, according to VW, allow an impressive 100 miles of driving before your next full charge. But, and there’s always a but, while this new automotive technology gathers momentum, this 100-mile range is tempered by the fact that your top speed using the Eco Plus mode and the max braking regeneration setting is limited to 56 mph with the electric motor running at 74 hp, max.

Meanwhile, the 2015 e-Golf carries its own onboard 7.2-kilowatt charging system that can be plugged into a DC fast-charging station for an 80% charge in about a half-hour. However, a further caveat now comes into play in that these fast-charge stations are few and far between. For this reason, among governmentally instigated others, the e-Golf’s availability is currently limited to 10 states plus Washington DC. It is, however, to be hoped that as the popularity of EVs increases, so will regulations be relaxed and the number of charging stations be expanded.

In any case, like others of its ilk, the 2015 e-Golf can be plugged into either standard 120-volt household current or, for some added cash, an available 240-volt outlet, but recharging a fully depleted battery takes some 20 hours using the former system and at least 4 hours with the latter system. Better hope you didn’t leave anything important at the office.

Summing up, all this propulsion posturing leads to mathematically challenging fuel-efficiency figures of 120 MPGe city/105 MPGe highway, according to Volkswagen.

Further standard techno-goodies include GPS navigation and a single-CD player boasting 8 speakers, satellite radio and auxiliary audio input, with all of the above interfaced via a 5.8-inch color display.

What's your take on the 2015 Volkswagen e-Golf?

jaymittal i have polo n i am still waiting for GT launched in Indian Automotive Market I really lone VW....>>>> www.dauto.co.in

Users ranked 2015 Volkswagen e-Golf against other cars which they drove/owned. Each ranking was based on 9 categories. Here is the summary of top rankings.

Have you driven a 2015 Volkswagen e-Golf?
Rank This Car

Looking for a Used e-Golf in your area?

how to find a lock code for my stereo