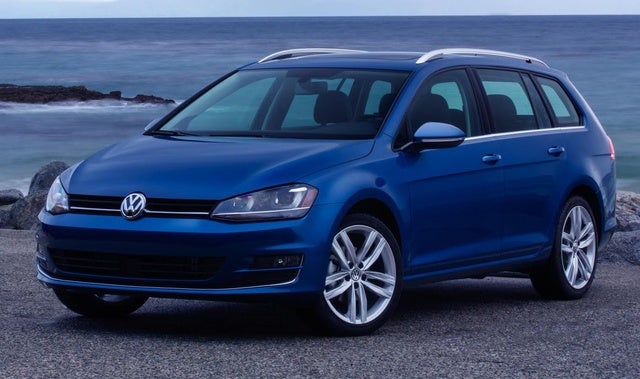 Volkswagen wants you to know that the 2015 Golf SportWagen offers more. More space in its cargo area, more miles per gallon, more length, more width, more leg and shoulder room and more high strength steel. However, they'd also like you to know that the Golf SportWagen also offers less. Less wind resistance, less weight, and less height (to lower the car’s center of gravity). To top it all off, the diesel iteration of the 2015 Golf SportWagen will cost about $2,000 less than the car it replaces, according to VW. The only people not completely thrilled about all this are those who just bought a 2014 Jetta SportWagen, which is the car being replaced.

The new 2015 Golf SportWagen is built on what VW calls the modular transverse matrix architecture, which they abbreviate to MBQ. Like all manufacturers, VW makes the most of the fewest possible basic platforms. This common core underneath each VW helps the company do a few things, to the benefit of their customers. By making so many common platforms, the quality can be maximized while cost is kept low via economies of scale. It also gives the VW family a feeling commonality across models.

The new front-wheel drive Golf SportWagen comes with two engine choices. The first is a four-cylinder, 1.8-liter turbocharged gasoline engine with direct injection that produces 170 horsepower. VW claims highway fuel economy for this model will leap by as much as 17% over the outgoing Jetta SportWagen and its 2.5 liter engine. The gas engine will be available with either a five-speed manual or conventional six-speed automatic transmission.

Most likely, VW fans and car enthusiasts will prefer the new 2.0 liter diesel. This new turbo-diesel engine makes just 150 horsepower but will also provide a gutsy 236 lb-ft of torque low in the rev band. VW has engineered the drivetrain to shift short and quick around town which will make the SportWagen feel snappy. The diesel comes with either a six-speed manual or six-speed DSG “dual-clutch” automatic transmission and purists can go either way on the transmission. Some love the full control that an old-school manual offers, while others prefer the modern, fast shifting, paddle operated automatic. In the past, some drivers not accustomed to the feeling of a DSG found its starts to be a little unsettling, and the odd feeling when one shifts into gear a little difficult to adjust to. For this reason, we'd suggest an extended test drive to let you really get the feel of the transmission.

Although this new 2015 Golf SportWagen doesn't yet have verified figures, VW reports estimated fuel economy for the diesel to the tune of 43 MPG highway rating. The 1.8-liter gasoline engine is expected to earn an EPA-estimated highway rating of 36 MPG. Both of those figures are better than comparable compact SUVs, which, of course, are taller, and thus have an aerodynamic disadvantage.

The Golf SportWagen has changed its looks for 2015, but only in comparison to previous VW wagons. The front wheels move about two inches forward compared to previous compact VWs, so the hood gets a bit longer. The roof-line is an inch lower than the outgoing Jetta SportWagen’s, and the car is also about an inch longer and wider. Volkswagen points to the slender radiator grill and angular design cues as key styling differences. In back, the load height has been lowered, which normally is a plus, but this car is already low. Unlike the cargo area of most CUVs, in which the cargo would pull straight out at hip height, this car may require more of a bend at the waist. Upgrades inside the cabin include the now fashionable panoramic sunroof.

VW is also now offering a Post-collision braking system. As helpful as this might be, the entire rest of the known car world is focusing on Pre-collision braking, and an advanced or superior system is required to earn the highest safety rating from IIHS. Although not yet rated, we expect the new Golf SportWagen to mimic the Golf sedan and earn a “Good” rating on all crash tests.

The new 2015 Golf SportWagen goes on sale in April of 2015 and, although not yet part of the launch editions, we expect VW will add optional 4-Motion AWD before December 2015.

What's your take on the 2015 Volkswagen Golf SportWagen?

Richard First I've heard of it. ??? What is a Post-collision braking system?

Users ranked 2015 Volkswagen Golf SportWagen against other cars which they drove/owned. Each ranking was based on 9 categories. Here is the summary of top rankings.

Have you driven a 2015 Volkswagen Golf SportWagen?
Rank This Car

how reliable are 2 litre diesel engines

WHAT SHOULD TIRE PRESSURE BE ON A 2016 GOLF SPORTWAGEN TSI

Hi, What does a fleet car mean and is it a negative in the resale value of the car?