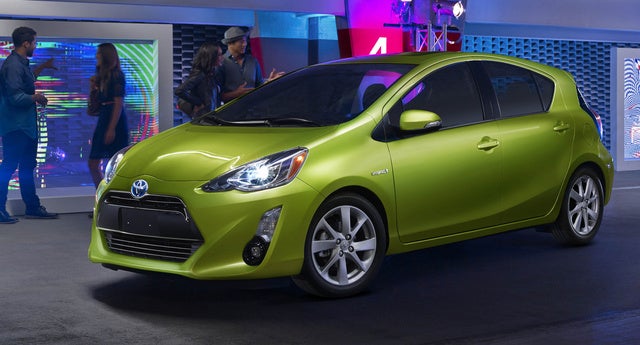 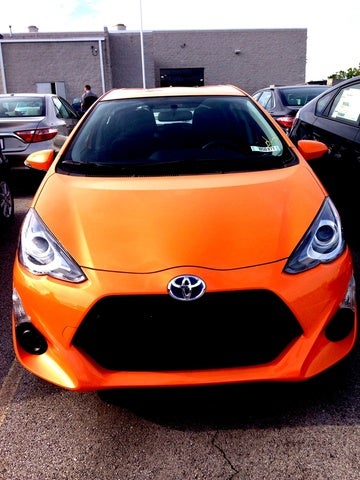 If you are considering a Toyota 2015 Prius c, you're in good company. The Prius c is the U.S. market’s second leading seller among all green vehicles. It outsells every model EV, and only its big brother, the Prius, can beat its sales. In other markets where city dwellers account for a large portion of vehicle sales, for instance Japan, the Prius c is the top-selling car, not just the top-selling green car. Setting aside the fact that the Prius c is the most fuel-efficient car in the city without a plug, the Prius c offers a lot of content for the dollar. New for 2015 are sleeker LED headlights and a newly styled grille that now matches other Toyota-family products more closely.

The 2015 Toyota Prius c is a subcompact car with a hatchback-style body featuring seating for 5 and 4 doors. Think of it as more of a “2-plus 3.” This is not a car that can be used to transport 5 people on a regular basis in any comfort. That's okay for many city dwellers, and the available drop-down 60/40 rear seatbacks make the Prius c a vehicle that can be very useful for hauling gear. Being diminutive also has its perks in terms of parking and maneuvering around double-parked cars and delivery vans on crowded city streets.

The Prius c is powered by a 73-hp gasoline engine. Before you click away to find something with a more realistic powertrain, remember that this is a hybrid car, and it also has an electric motor augmenting the gas engine. In total, the system power is about 99 hp, but starting torque is more than you would expect due to the electric drive. The electric drive allows for some creeping around parking lots and in traffic on full electric power as well. However, range is very limited—in fact, it's less than a mile at under 25 mph. If you are looking for more electric-only miles, consider the Prius Plug-in, which can drive 12 miles and at highway speeds on full electric power.

Fuel economy and a lower carbon footprint are the raison d'etre of all compact green cars, and the Prius c excels here. EPA estimated fuel economy is 53 mpg city/46 highway/50 combined. These numbers are worthy of some respect. In its element, nothing offers a lower cost per mile for energy, including EVs in many markets. The carbon footprint of the Prius c is also one of the lowest of any vehicle one can buy. The c produces just 178 grams of CO2 per mile and scores a perfect 10 on the EPA’s smog rating.

The interior styling of the Prius c makes it one of Toyota's most modern models. It's not unfair to say that it has a bit of the slick Honda Civic look to the dashboard. It includes an upper multi-information display, where the driver can see the speed limit and fuel-efficiency related information. Toyota moves this to the right a bit, rather than placing it directly ahead of the steering wheel. Underneath that is an infotainment screen offering available amenities that younger urban buyers want, for example, Open Table, Pandora, Yelp, and other apps that many use on a daily basis. Controls are kept relatively simple. Navigation is reserved for the top two trims, because the younger and more urban the buyer, the higher the chance that driver uses a phone for navigation.

Toyota makes buying a Prius c as easy as possible. Rather than slick marketing trim names like "Limited" that the brand applies to other models, Toyota simply names the four trim levels One, Two, Three, and Four. The One is the base model. Toyota tried very hard to keep the price low on this trim, eliminating things like an engine immobilizer and drop-down rear seats. The MSRP of the 2015 Prius c One is just $20,760. A Four with its single package tops out under $26K.

Safety is one area where the 2015 Toyota Prius c is not a standout. It scores a Poor on the Institute for Highway Safety’s (IIHS) small frontal overlap test. Also, it's not offered with driver aids like forward-collision prevention (FCP). Couple that with its small size and weight and you have a car that does not offer a warm and fuzzy safety blanket. If this is of concern to you, consider the Prius, which earns the industry’s top safety rating, the IIHS's Top safety Pick+, when equipped with optional FCP.

Users ranked 2015 Toyota Prius c against other cars which they drove/owned. Each ranking was based on 9 categories. Here is the summary of top rankings.

Have you driven a 2015 Toyota Prius c?
Rank This Car

I have just imported a toyota aqua 2015 from japan. On thr way back home a light appeared. Its a wrench with an exclamation mark on it. Anyone knows what it is and how to switch off? I suspect its...

Am I Getting Scammed

Someone wants to buy my car without at test drive. It seems like a scam. Is there a way I can confirm it is out is not a scam.

Why is the warning message showing now: "Cooling performance of the hybrid battery is low ... see your dealer". Is this serious and will cost me a lot of money or can I do something to fix the pr...

2015 Prius C Has A Mold Smell That Varies In Intensity And Seems To Be Wors...

Anyone else experiencing the mold smell from vents. Worse on humid days. Bought a brand new 2015 and it started smelling of mold around 5,000 miles. They have done all the useless stuff like changing ...

No Beeping When Locking/unlocking 2015 Prius C With Key Fob

I don't have a chirping sound when I lock or unlock my car with the key fob. Is that something that can be programmed?