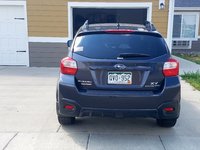 The 2015 Subaru XV Crosstrek is in the top echelon of small crossovers thanks to its capability, efficiency, and affordability. 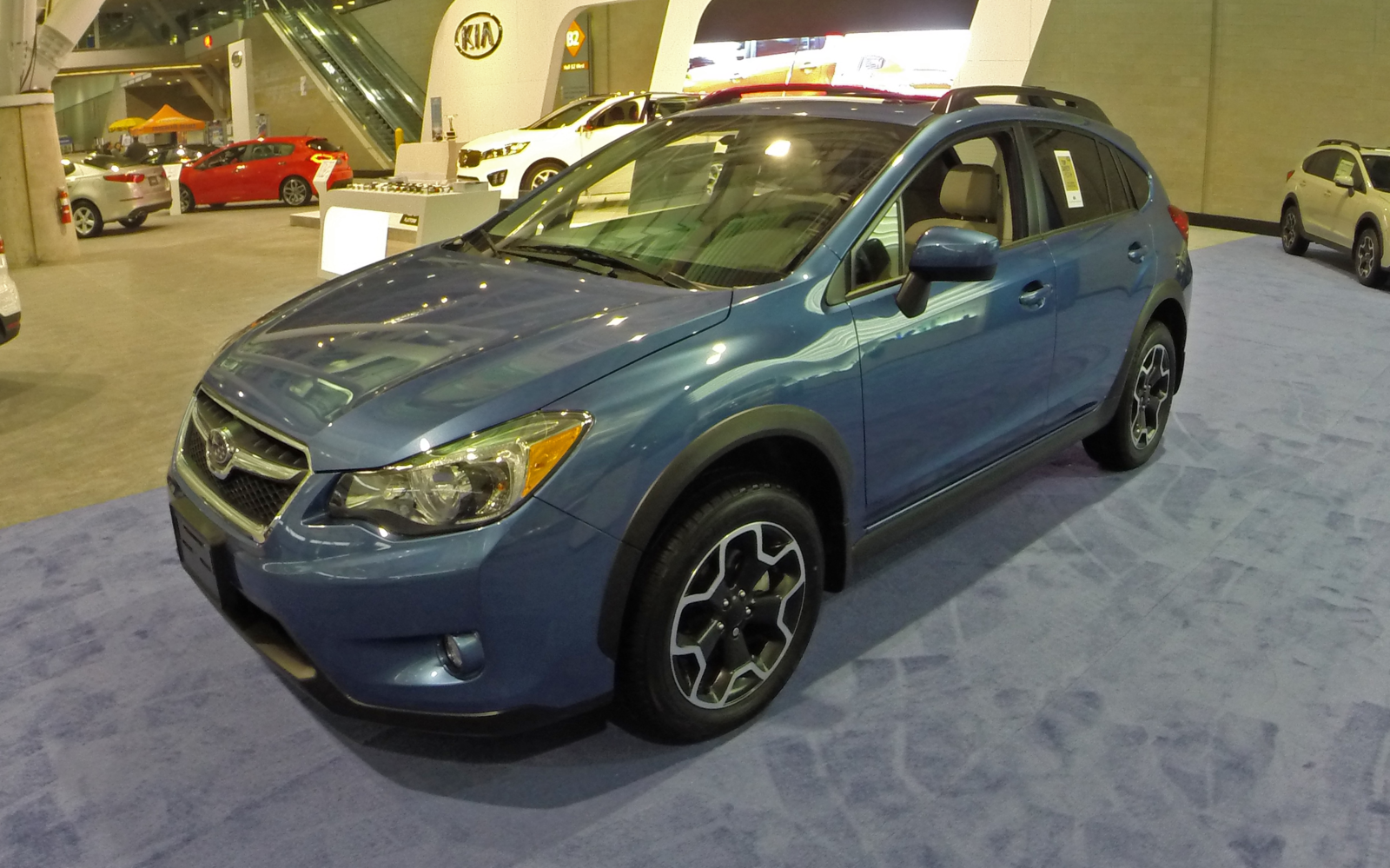 The 2015 Subaru XV Crosstrek improves on previous years with an updated infotainment system and enhanced safety features. The "same old" applies here: This is a rugged, capable small ute with plenty of interior room, versatility, and all-wheel drive. If you can get past the small engine and a few interior gripes, the little Subaru is a big player for crossover buyers. 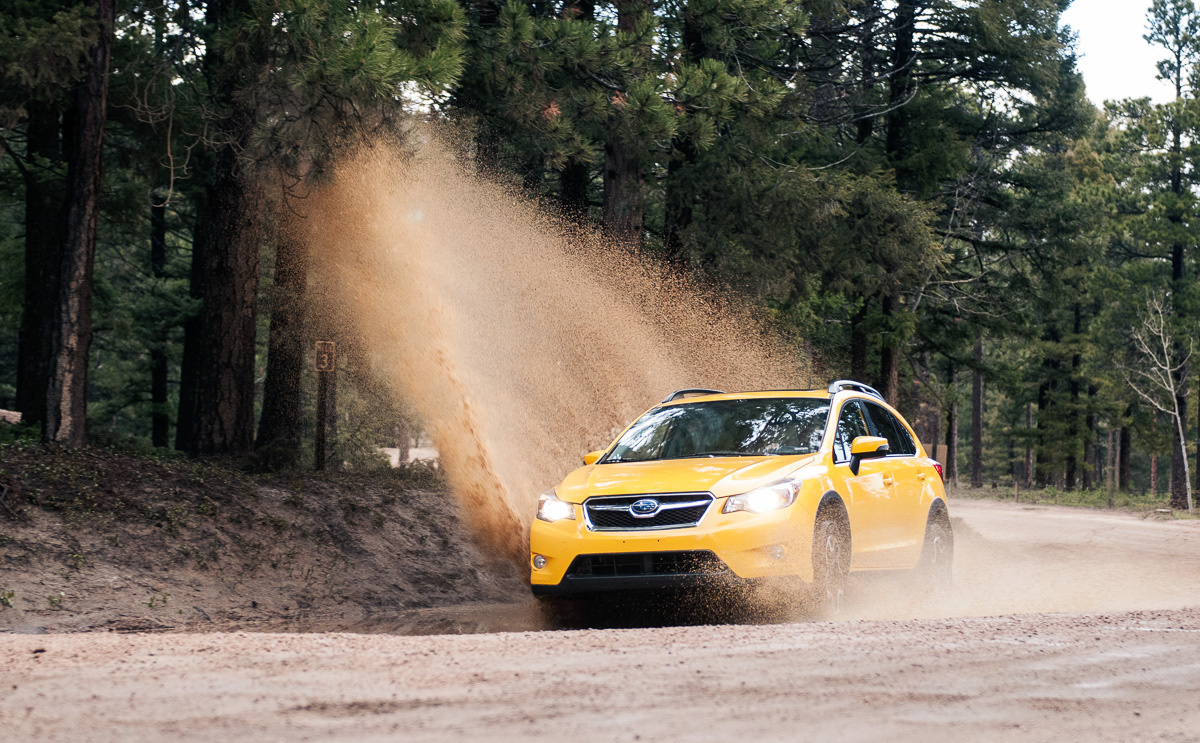 The 2015 Subaru XV Crosstrek is Subaru’s answer to the small crossover craze and a spiritual successor—if not direct—to the mega-popular Outback Sport. The small wagon is built on the Impreza’s architecture, but with increased ground clearance, and it's available only in a 5-door configuration.

The car is geared toward capability, rather than performance, and sports a funkier look that is actually relatively tame compared to others in its class. The XV Crosstrek (the letters are pronounced, not the Roman numerals) was all-new for 2013 and updated slightly for 2014 and 2015, most notably adding a hybrid model for 2014.

In addition to the base trim, this year’s Crosstrek sports an in-your-face Sunrise Yellow for buyers bold enough to drive a car brighter than an Ikea billboard and interior upgrades that Subaru has applied across its model lineup. A 6.2-inch touchscreen infotainment system with backup camera is standard across all trims, and the 2.0i Premium and 2.0i Limited trims can be fitted with Subaru’s EyeSight system, a suite of safety features including lane-departure warnings, blind-spot detection, and forward-collision alert.

Many shoppers will be swooned, however, by the Crosstrek’s ample cargo room and brutal simplicity for a relatively modest price. In two years, the XV Crosstrek has become the third-best selling Subaru, behind the Forester and Outback. 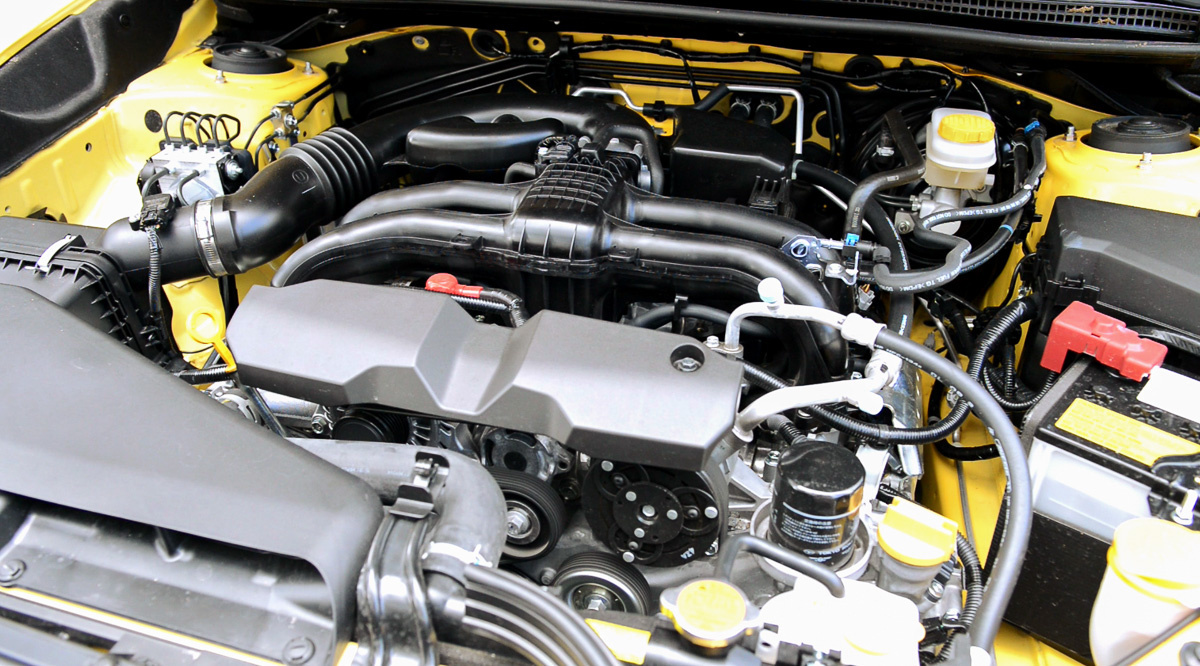 The XV Crosstrek is available with only one engine, a 2.0-liter boxer 4-cylinder that produces 148 hp and 145 lb-ft of torque. That engine is married to either a 5-speed manual transmission or a CVT with paddle shifters to simulate gears. Subaru’s AWD system, dubbed Symmetrical All-Wheel Drive, is standard on all models and varies only slightly depending on the selected transmission.

The engine's power figures, 148 hp and 145 lb-ft of torque, are representative of the Crosstrek’s primary mission: efficiency over performance. The relatively small motor won’t blow anyone’s doors off at the line; it manages to make the run up to 60 mph after 9 seconds of painful droning. Temper your expectations for a performance car, though, and the Crosstrek will reward patient right feet with a 26 mpg city/34 highway/29 combined mileage return according to the EPA when equipped with a CVT or 23/31/26 with a manual. The Crosstrek is rated by the manufacturer to tow 1,000 pounds without a trailer brake or 1,500 pounds with a trailer brake.

To say the Crosstrek is underpowered wouldn’t be entirely accurate: I’ve conquered rivers in the middle of Iceland in a blizzard in November in a Crosstrek. However, the real performance of a Crosstrek isn’t measured in its horsepower, but rather its AWD and 8.7 inches of ground clearance. The motor often has just enough power to make it up the mountain, and little else. An over-eager traction-control system will step in well before you tax the Crosstrek to do much more than slowly scale difficult terrain. 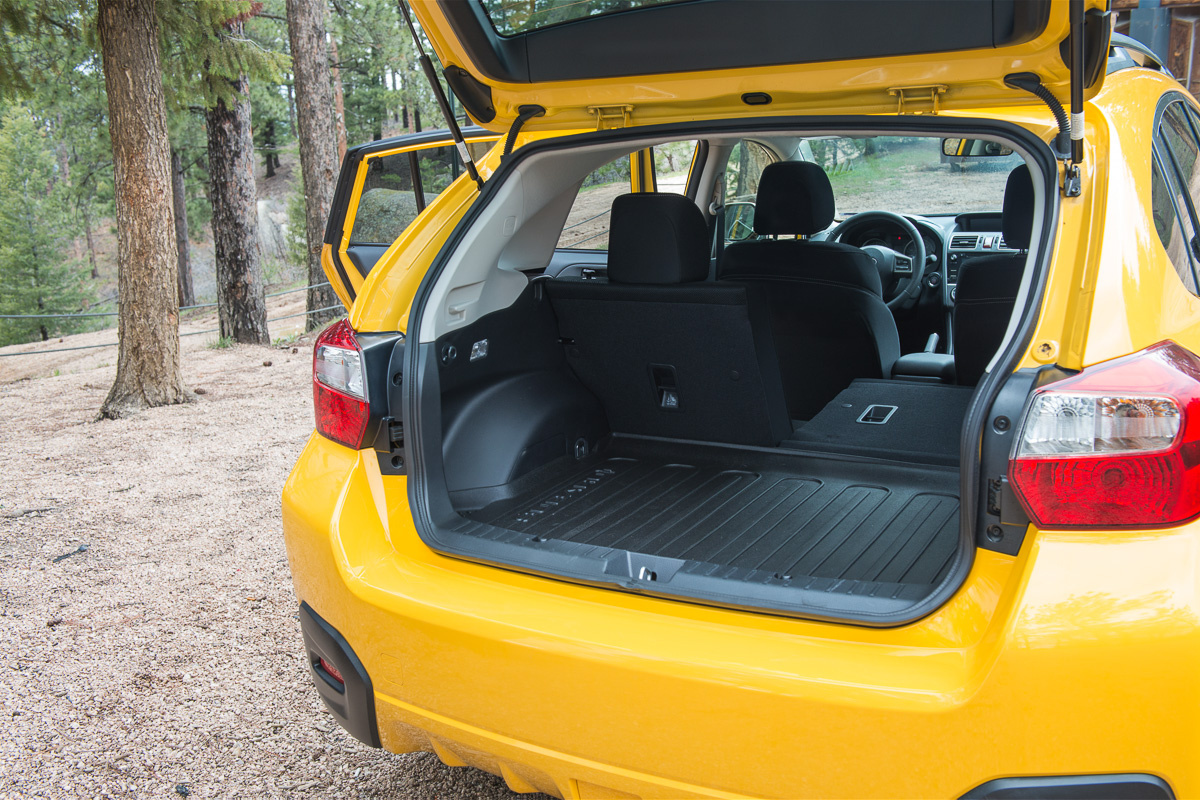 The car’s on-road manners are surprisingly good considering its relatively tall center of gravity. The Crosstrek is mildly splashy around corners, and its relative lack of performance may be a blessing here: You’re not going to press the Crosstrek into sharp, tight cornering, because it’ll take a while to get there.

For 2015, Subaru quickened the ratio for its electric-assist rack, but the difference isn’t quickly noticeable. Previous iterations of the Crosstrek never felt entirely lazy, and this year’s model doesn’t either. Of course, the risk of quickening steering is a nervous car, but the Crosstrek’s generous on-center spot alleviates any of those concerns.

The biggest knock on the Crosstrek so far—and especially in its 2013 launch year—has been that the car is entirely too noisy, and not in a good way. Over the last year, Subaru has dramatically improved the sound deadening and cabin comforts for the Crosstrek, although it won’t be confused with a luxury car anytime soon. At high speeds, the pressed engine and tall tires drone along with the taxed transmission, so I guess you’ll have to turn the radio up or something.

In all, the Crosstrek is just as composed meandering around town as it is gallivanting off-road, and that’s high praise for a car that looks more at home covered with caked-on dirt than sparkling clean in a valet lot. 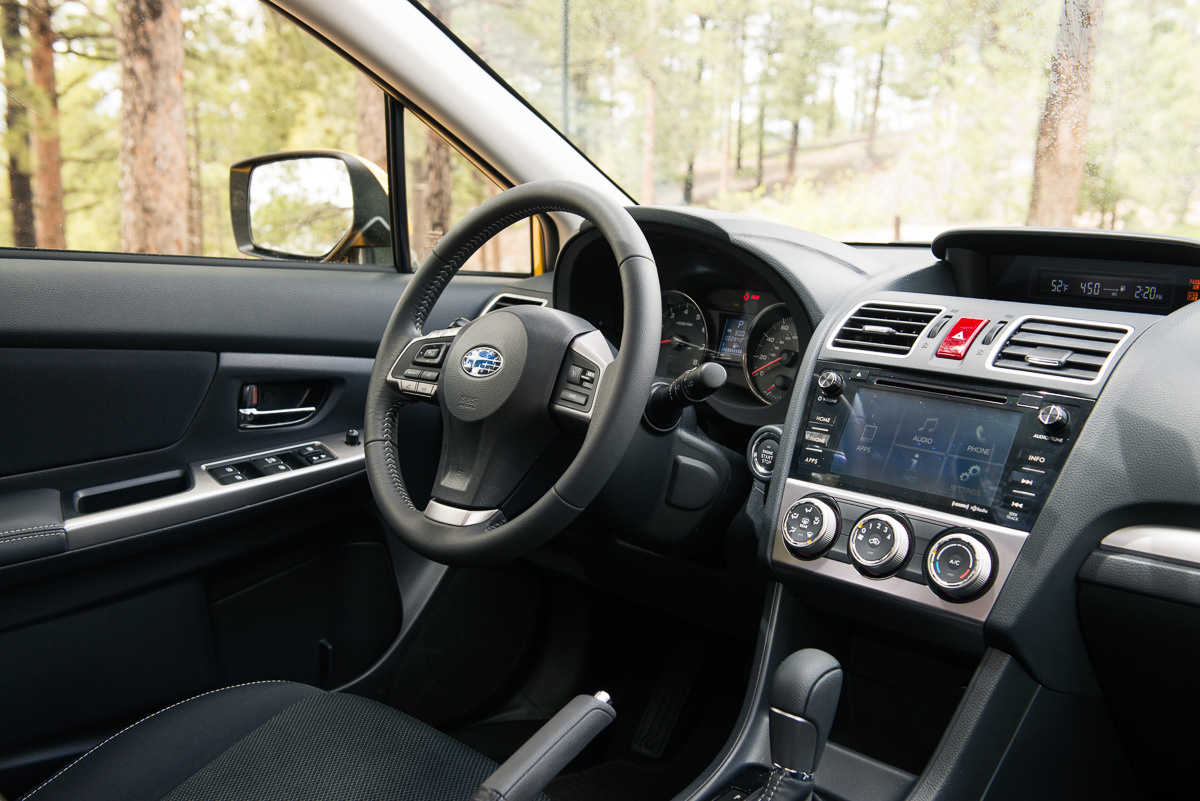 This year’s Crosstrek is the beneficiary of Subaru’s updated infotainment system. The 6.2-inch standard touchscreen is bright and readable, with accessible Bluetooth phone pairing and streaming. For all trims, a backup camera with exceptional clarity and visibility is standard—provided you haven’t caked it with mud, like I usually do.

The 2.0i Premium’s 6-speaker audio system sounds clear and is impressive for a non-branded premium system, and the range of available apps through Subaru’s StarLink system is surprisingly useful. An optional 7-inch screen is available on cars fitted with EyeSight and includes Subaru’s updated navigation system. As far as navigation systems go, Subaru’s is better than average and was a much-needed improvement.

Creature comforts, such as power everything and heated and ventilated seats, are missing from the Crosstrek. Despite the race toward opulence in the Outback, the Crosstrek still languishes with the Impreza’s poorly placed heated-seat switches (check near your spleen), and the interior cloth material is a little—how should I say—Army/Navy Surplus-ish?

The Crosstrek makes hay in interior space, of which it has plenty. Seats up, the cargo area fits 22.3 cubic feet of stuff, and with the seats down, it fits 51.9 cubic feet. On a trip up the mountain, I packed a Crosstrek with a bike (front wheel detached), six camping chairs, a cooler, sporting goods (you pick), backpacks, sleeping bags, and a tent, with room to spare. Its easy load height and high ceiling make the Crosstrek punch much higher than its 103.7-inch wheelbase would indicate, and it’s easily one of the most attractive features of the car.

Subaru’s interior materials could use a once-over from engineers, but the days of hard plastic and cheap switchgear are, thankfully, over. 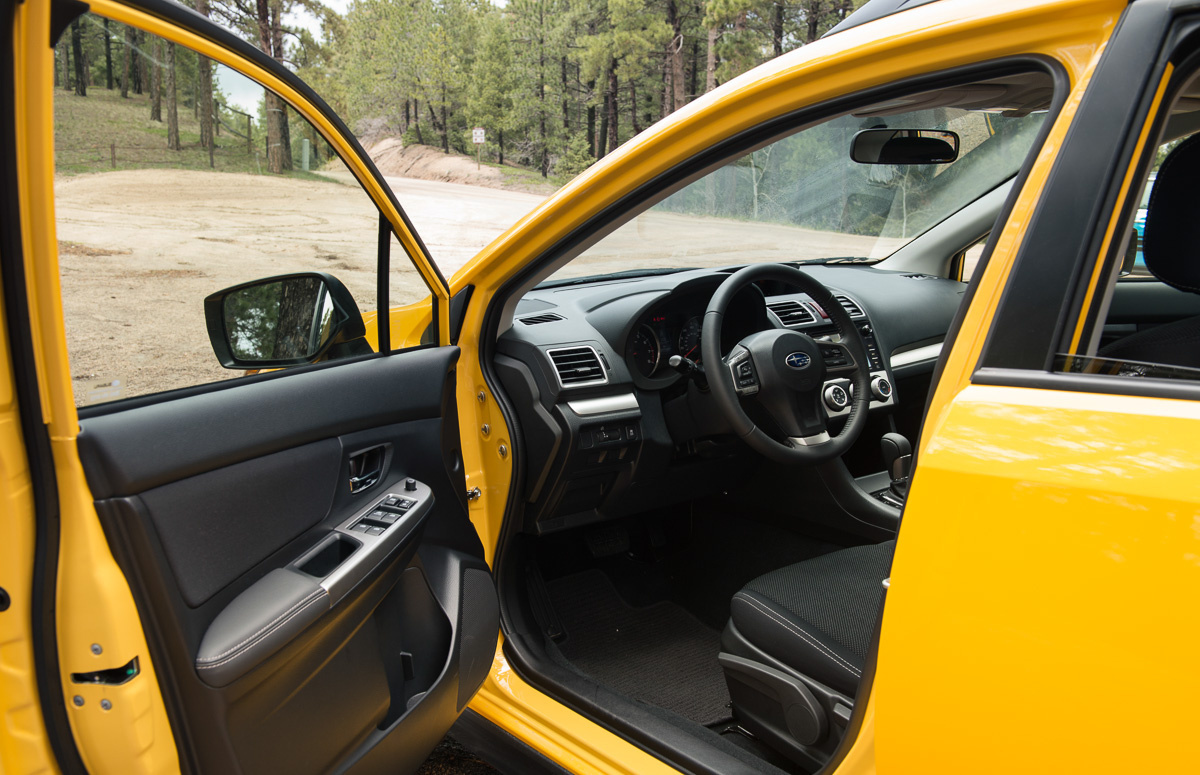 The 2015 Subaru XV Crosstrek has received the highest marks possible from the Insurance Institute for Highway Safety and the National Highway Transportation Safety Administration.

The Crosstrek scored Good ratings on all the IIHS’s safety tests, including the notoriously difficult small overlap front crash test. With the EyeSight safety system installed, the Crosstrek earned a Superior rating on the group’s Front Crash Prevention test.

The NHTSA bestowed a 5-star overall safety rating on the Crosstrek, with 4 stars for frontal and rollover crash safety, and 5 stars for side impact crashes.

Without the optional EyeSight system on 2.0i Premium and 2.0i Limited models, the Crosstrek comes standard with 4-wheel antilock brakes; driver, passenger, and side curtain airbags; traction control; and child seat latches. Models equipped with EyeSight feature blind-spot monitoring, frontal-collision alert, and lane-departure alerts. All Crosstrek models are equipped with a rear-view camera. 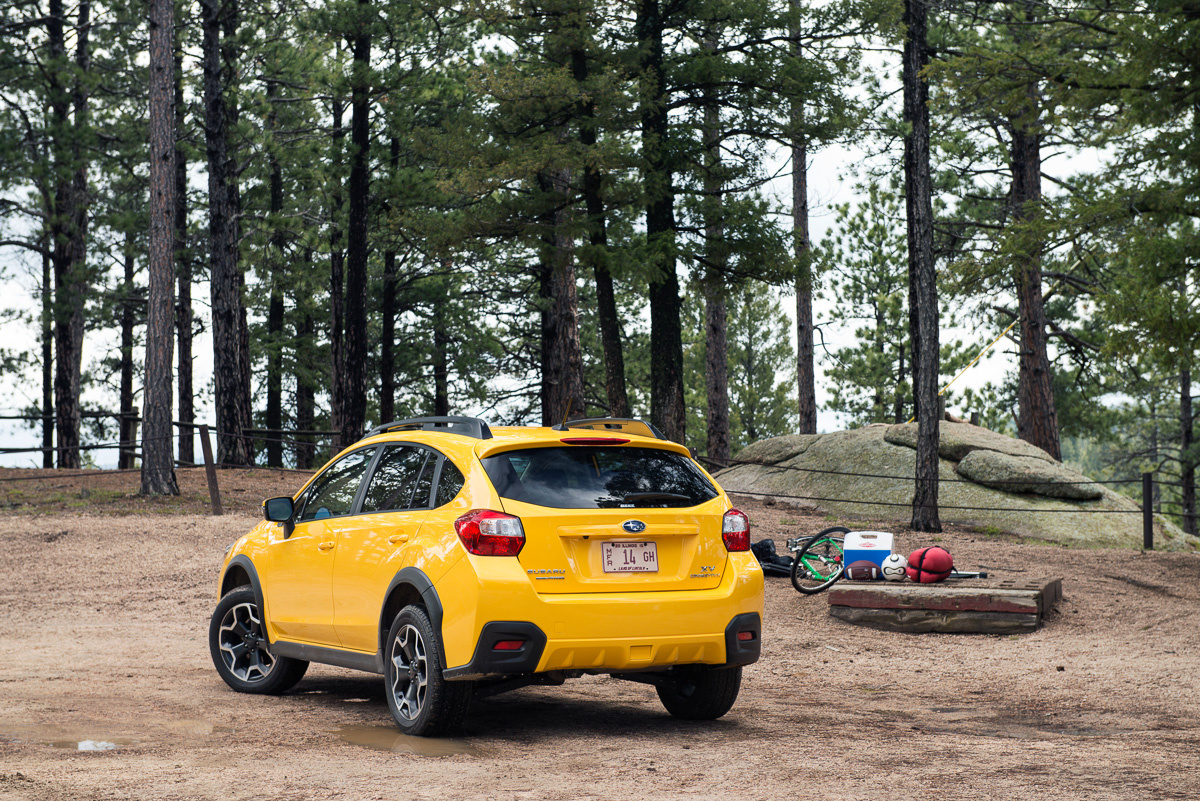 In the ultra-competitive small-crossover market, the Subaru Crosstrek is a viable entry. Starting at $22,495 for the new 2.0i base model, the Crosstrek tops out at well under $30,000 for a top-of-the-line specimen. Compared to others in its class, including the Mazda CX-5 and Jeep Renegade, among many others, the Crosstrek fares remarkably well considering its standard all-wheel-drive spec.

Users have reported only minor issues with their Crosstreks so far, but have noted the small-ish engine and sizable road noise coming into the cabin. Critics have generally been favorable to the Crosstrek, and Subaru has topped Kelly Blue Book for resale value. KBB awarded the automaker with the Most Trusted Brand in America for 2015.

Despite minor niggles with the interior and a less-than-potent engine, the Crosstrek is a sizable force in a market full of diminutive crossovers.

What's your take on the 2015 Subaru XV Crosstrek?

jharwick This is a driver's "fun car." Passengers might appreciate a quieter and smoother ride, but I love this machine! My previous VW GTI was quicker and more civilized, but with the 4WD, the Subaru feel more capable, and the handling is superb for so much height. The price was another bonus.

Users ranked 2015 Subaru XV Crosstrek against other cars which they drove/owned. Each ranking was based on 9 categories. Here is the summary of top rankings.

Have you driven a 2015 Subaru XV Crosstrek?
Rank This Car

Why isn't the Subaru issue with key stuck in the ignition not being recalled ? Does anyone have it documented it's a factory defect?

Subaru XV CVT 2.0i Shudders When Accelerating From Full Stop

I have a Subaru xv 2.0i 2015 CVT. Converted to LPG. The car is jerking when moving from a full stop. If I disconnect the battery and reconnect it drives perfect for a day or so. And then it's jerki...

313 views with 8 answers (last answer about a month ago)

I had been told I could not operate (drive) my XV with tbe valet key. My purse was stolen and the dealer said it had ro be towed in to make new keys.. When I said the car can be driven they were surpr...

Is My AC Blower Out?

2015 Crosstrek here, The resistor has some corrosion on all 4 pins and some melted plastic around 1 pin on the connector to the control knobs. It ran only on high most of the day until it failed when ...

208 views with 9 answers (last answer about a year ago)

My subaru currently has 32,000 miles on it. I bought it last year with approximately 16,000 miles. Over the months I have noticed a ticking sound coming from the engine compartment. Oddly enough, ...