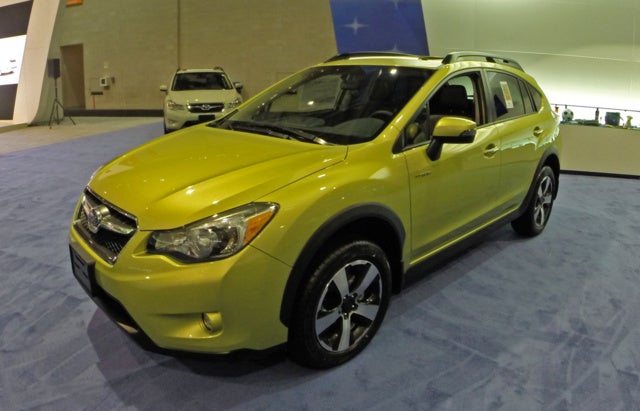 Average user score
4 ⁄ 5 stars
Based on 2 reviews
Review by Kendra — Unfortunately the base interior felt very Vanilla. Snazzed up interior with some leather and in the trim would possibly got me with shorter cargo back capacity . Plus no spare tire. Means i need ru... Read more 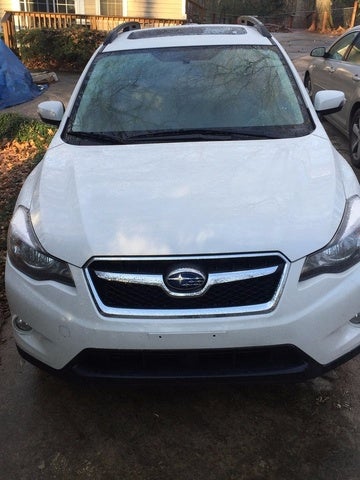 The 2015 Subaru XV Crosstrek Hybrid does achieve greater fuel economy than its conventional sibling. However, it's the extra power and torque that makes it special. Yes, the Crosstrek hybrid is a fuel miser (particularly for its style), but performance is what makes it worth the $4,000 premium over the all-gas Crosstrek.

The 2015 Subaru Crosstrek Hybrid is Subaru’s first U.S. hybrid and green-car buyers looking for an all-wheel drive (AWD) compact crossover were happy to welcome it. Subaru made a smart marketing decision with the Crosstrek. Rather than hobble the car with a drivetrain that was weaker than its base car’s 148 hp, it built upon that power. The XV Crosstrek hybrid adds 15 hp but, even more importantly, it boosts torque. The torque added by the electric motor comes immediately when the accelerator is applied and adds 16 lb-ft total over it's all-gas counterpart's peak number. However, in the low rev range, the torque added is much more significant — about 50 lb-ft. This means the hybrid is snappier off the line and has more grunt down low. All Crosstrek Hybrids use a continuously variable transmission (CVT) with paddle shifters. The paddle shifters mimic the gear changes one might find in a car with a conventional 6-speed transmission, thus allowing the driver to hold the engine in the higher rev-bands if they choose to.

Additionally, the hybrid drivetrain in the Crosstrek Hybrid improves city fuel economy and overall fuel economy, but not highway mpg. The hybrid is rated at 30 mpg city/34 highway/31 combined — an improvement of 4 mpg city, and 2 mpg combined. Like the conventional Crosstrek, the hybrid also uses regular gasoline.

The 2015 XV Crosstrek Hybrid is also greener than the standard Crosstrek. Its CO2 production per mile improves 9 percent, and its smog rating improves from a 7 to an 8 on the EPA’s scale. The XV Crosstrek Hybrid is a Partial Zero Emission Vehicle (PZEV). Stop-start technology shuts of the Hybrid’s engine at stop lights and when the vehicle idles to save even more fuel. Combined, all of these factors help boost Subaru’s Corporate Average Fuel Economy (CAFE). This is important to Subaru, a company that does not offer compact, two-wheel-drive economy cars in the U.S. market, and which has no electric vehicles to offer yet.

The 2016 Subaru XV Crosstrek comes in two trims: Base, and Touring. All Crosstrek Hybrids get the upgraded Subaru Starlink system that allows information displayed on one’s smartphone to appear on the car’s infotainment screen. Both trims also feature keyless entry with push-button start and heated front seats. In the base Hybrid, the infotainment screen is 6.2 inches and in the Touring it's 7. The Touring also features Navigation and real time traffic information, a power moonroof, and leather seating.

Safety has become one of the Subaru brand’s main focus areas. The 2015 XV Crosstrek aced every crash test the Insurance Institute for Highway Safety threw at it. That includes the tough small frontal overlap crash test, which simulates hitting a telephone pole with just the front corner of the car. Oddly, Subaru does not offer its acclaimed optional EyeSight forward crash prevention system in the Hybrid models, meaning the 2015 Subaru XC Crosstrek Hybrid can't earn the industry’s top safety rating. Still, it remains a Top Safety Pick.

The Subaru brand is known for its all-wheel drive, rugged construction, simple-to-operate controls and safety. All of that is here in the 2015 XV Crosstrek Hybrid. The hybrid powertrain adds noticeable grunt and zippiness, green-car credibility, and improved overall mileage without any sacrifice in what makes this particular Subaru such an appealing little crossover.

What's your take on the 2015 Subaru XV Crosstrek Hybrid?

Shel0930 Do you know if Eyesight will be available in the 2016 Hybrid Touring Crosstrek? Thanks!!!

rdhvet I bought one used with 44,000 mi on it. The hybrid battery won't take a full charge, so the stop/start doesn't function. According to the Infoscreen, the hybrid electric motor does kick in on acceleration as advertised. Have had it to the dealer twice. They probably don't want to replace that battery under warranty! Otherwise, I like the car.

Have you driven a 2015 Subaru XV Crosstrek Hybrid?
Rank This Car

How Can I Get The Engine To Stop Running When I Come To A Stop And The Turn...

Not working as a hybrid now

578 views with 2 answers (last answer about a year ago)