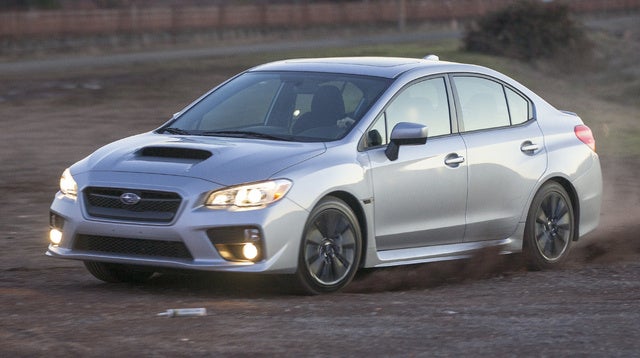 Hey, there is so a Subaru screamer! The Japanese automaker has bulked up its road-rally-ready WRX for 2015 and has disassociated it from the stodgy Impreza moniker, although they will admit that the tweaked-out track-tackling WRX lineup still rides on its straight-laced compact family 4-door progenitor’s chassis. But that’s where any comparison ends, including the availability of a hatchback version.

Alas, you read correctly. The 2015 WRX no longer offers a 5-door vacation-ready hatchback option, thus trunk capacity is just that. But a wheelbase stretched by an inch or so is expected to bump said luggage-toting capability to just over 12 cubic feet, not to mention allowing rear-seat passengers a bit more legroom. And of course it’s expected that this 5-passenger performance sedan will return in the affordable Base trim, as well as the up-featured Premium and flagship Limited variations, with all trims once more sporting that spiffy Subaru tradition, standard full-time all-wheel drive (AWD).

Noteworthy upgrades for 2015, meantime, may go unnoticed at first glance, but are slated to include a lighter frame, a sportier suspension, improved handling, upgraded seats and a redesigned center stack flaunting 2 LCD displays, an upper 3.5-inch multifunction screen and a lower 4.3-inch infotainment monitor that also integrates the available navigation functions. Also, a new flat-bottom steering wheel gives the redesigned dashboard an even more modernistic montage.

Undoubtedly, the most anticipated change for the 2015 WRX, however, is a more potent 2.0-liter turbocharged horizontally opposed 4-cylinder (boxer) engine that loses a half-liter in cylinder size, but adds a few more horsepower and some 14 more lb-ft of torque. Thus power numbers from the unique flat 4 now stand at 268 hp and 258 lb-ft of torque, all of which is managed by the standard… and brand new… 6-speed manual transmission. In yet another departure from the 2014 version, a shiftable continuously variable transmission (CVT) that flaunts steering-wheel-mounted paddle shifters in driver-selectable 6- or 8-speed variants also debuts in this year’s reworked rally reveler. Additionally, the available CVT adds a new dimension to the AWD system, allowing a bit more flexibility in maneuvering snow-covered roadways. Mileage, meantime, remains estimated at 19 mpg city/25 highway with the 6-speed stick shift.

Although details are still sketchy, look for the next-gen WRX trims to go on sale in the spring of 2014 carrying such bling as 17-inch alloy wheels, premium cloth upholstery or, in the Limited trim, leather upholstery that covers heated power-adjustable front seats. Heated power outside mirrors and a power moonroof also adorn the Premium and Limited versions, with cruise control, telescoping tilt-wheel steering, single-zone climate control and Bluetooth hands-free communications again delivered with all 2015 trims.

Look for this nimble 4-door to additionally sport a single-CD player with 6 speakers, all integrated with a USB port, while the Premium and Limited trims are slated to remain eligible for an optional premium audio system boasting satellite radio and a Harman Kardon audio system sporting a 10-inch powered subwoofer.

Finally, standard safety equipment across the 2015 WRX trim spectrum is expected to remain anchored by 4-wheel antilock braking (ABS), traction and stability control, front side-mounted airbags, and front and rear head airbags. Also, look for daytime running lights as well as a remote antitheft alarm to return to the lineup, while the Premium and Limited should retain their standard front fog/driving lights, and the Limited will again bear xenon high-intensity-discharge (HID) headlights.

While this sporty little Subaru won’t cause the folks at Ford’s Mustang division or GM’s Camaro builders to lose any sleep, it might just put a little more pizzazz into the commute while allowing you to laugh at the weather.

Users ranked 2015 Subaru WRX against other cars which they drove/owned. Each ranking was based on 9 categories. Here is the summary of top rankings.

Have you driven a 2015 Subaru WRX?
Rank This Car

Zan. asked a 2015 Subaru WRX Sport Maintenance & Repair question about a year ago

Hello Gurus! If I get a flat tire, is there a way to put my car into 2-wheel drive mode to reduce stress on the drivetrain from having a differently-sized spare tire? Would any of y'all recommend inv...

Can the shipping/delivery be done to Puerto Rico?

Hello I baught used winter tires for my wrx 2015, my question is will used tires damage my car, they are pretty much all evenly worn down.and does it matter if they are r16's and not r17's that are...

I Just Posted My Car To Sell, But Now I Can't Find It In The Menu? Where I...