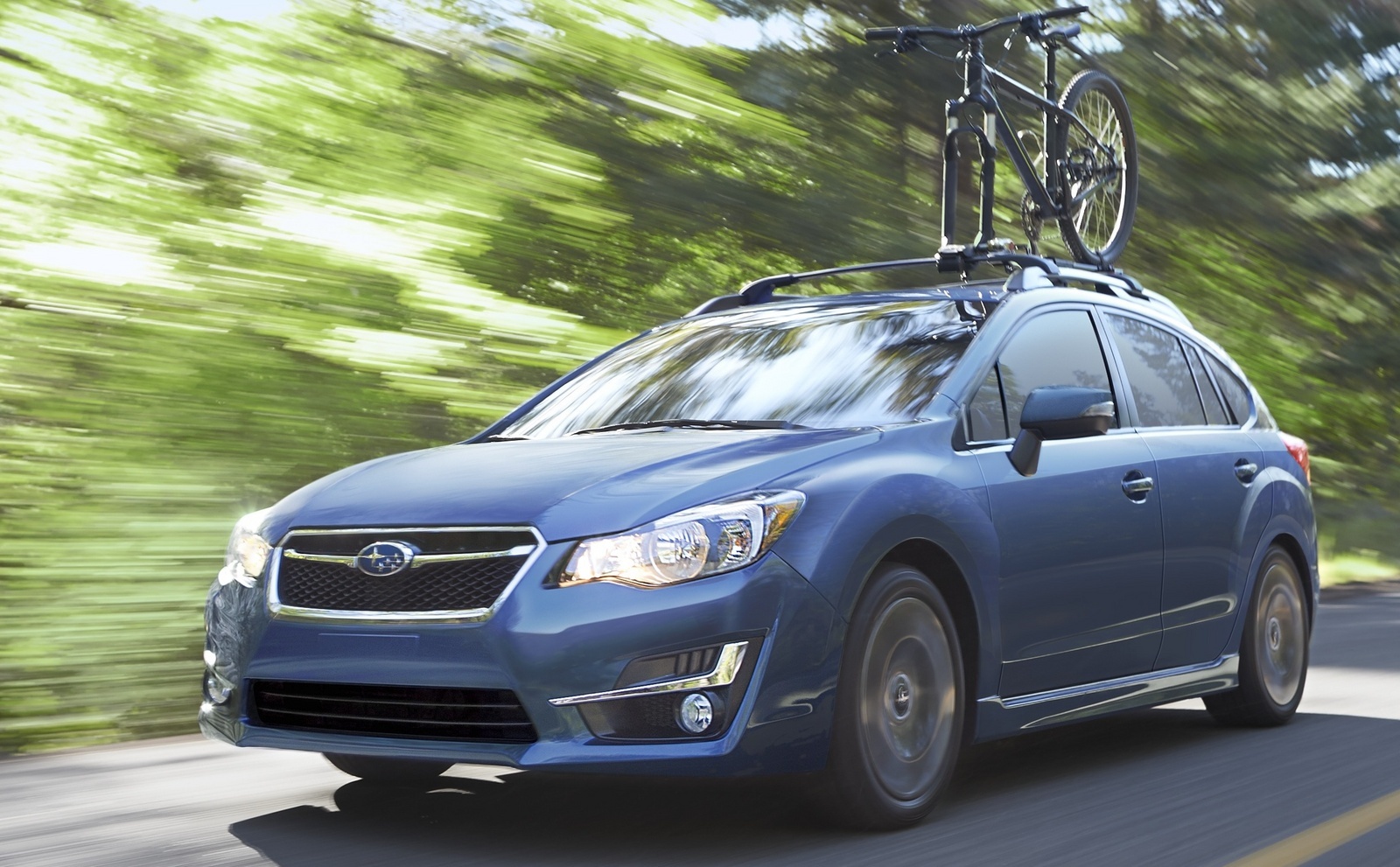 Hitting its mid-cycle makover, the Subaru Impreza gets a much needed front facelift along with better technology inside. The compact commuter is still among the most capable and ready cars on the road—albeit with a smallish engine and less-than-thrilling transmission. Love-it-or-leave-it looks still split fans, but finally the Impreza offers better looks inside. 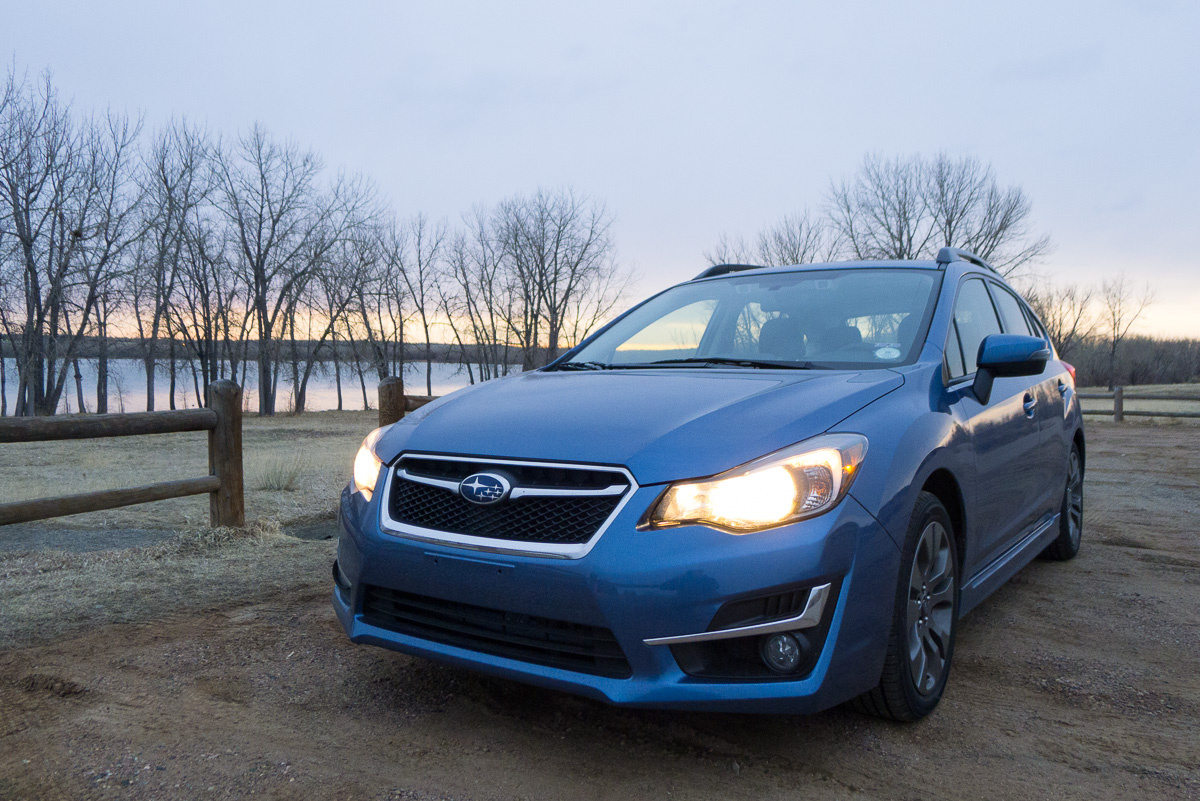 The Impreza remains Subaru’s most economical way to step into an all-wheel-drive compact commuter car for all-weather states. Improving off a complete overhaul 3 years ago, the 2015 Impreza boasts a new front bumper, grille, and headlights to sharpen its nose and presence. A new spoiler has been added to the sedan for a sportier rear end, and Premium packages offer bigger, 17-inch wheels and rocker panels to chunk up an otherwise fairly sedate aesthetic.

Similar to previous years, Subaru offers the Impreza in sedan and Sport hatchback versions, ranging from entry 2.0i to 2.0i Premium and 2.0i Limited trims. The hatchback is available only in Premium and Limited trims. All versions receive Subaru’s 2.0-liter, flat 4-cylinder engine that produces 148 hp and 145 lb-ft of torque. That may not sound like much—and it’s not compared to the boosted versions in the WRX and STI—but it’s by design. When Subaru introduced the fifth-generation Impreza a few years ago, the engine’s displacement was shortened from 2.5-liters to 2.0-liters to help boost flagging fuel economy compared to its competitors. This year’s model, when equipped with a continuously variable transmission (CVT), achieves the heady figures of 27/36/31 in city/highway/combined mileage, according to the EPA. Opting to row your own in the standard 5-speed manual that can be fitted to the base and Sport Premium models knocks those figures down only slightly.

The biggest change for the Impreza this year is upgraded materials inside the car, which include more sound deadening, a larger optional touchscreen navigation system, and an upgraded optional EyeSight driver-assist package that includes lane-departure warnings, pre-collision brake assist and adaptive cruise control. For anyone familiar with older models, the increased attention to the interior should be welcome. For years, Subaru has maintained a laser-like focus on its all-wheel-drive powertrain and capability, with interior accoutrements sometimes getting the short end of the stick.

The exterior styling may not say as much as the Mazda3's or even the new Volkswagen Golf's, but while the car lacks exterior personality, it may finally pick up points in interior comfort and capability. And at least you’ll be somewhat invisible to police.

Our test car, a 2.0i Sport Limited, flaunted the most you could ask from an Impreza—5-door hatchback, roof rack and fog lights, 17-inch painted aluminum alloy wheels, moonroof, keyless remote with push-button start, and 7-inch touchscreen entertainment system—for a price of $26,885. 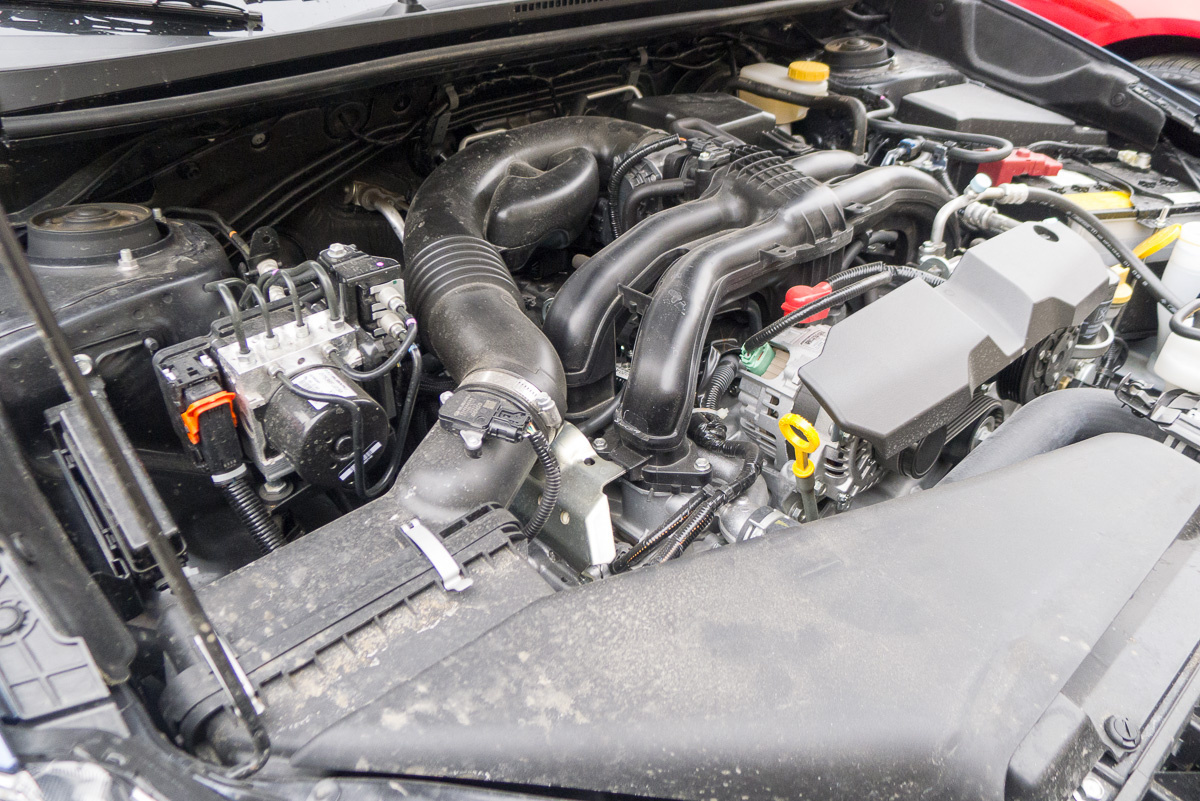 Subaru’s horizontally opposed cylinders in all its engines have long been the company’s selling point to buyers. The flat-4 design in the Impreza helps keep the center of gravity lower and ground clearance higher thanks to its compact design. It also produces Subaru’s raspy engine note, which, on a cold morning without coffee, can cut through the thickest of mental fogs.

Performance-minded drivers may notice that the mill needs to be wrung out nearly everywhere you go; a heavy right foot may be needed to catch up with highway traffic, and the Impreza definitely won’t impress many on the drag strip (0-60-mph times range in the high 9s.) But your patience and slower-speed drivers will be rewarded with a significantly stiffer chassis than the last generation and a tighter drive and steering response from the electric-assisted power rack.

Your only engine option in the Impreza is the standard 4-cylinder that cranks 148 hp and 145 lb-ft of torque, but it's enough to maximize the Impreza’s all-wheel-drive setup across all models and trims. In mountain states, it’s commonplace to see a compact Impreza plow up mountain roads and tackle biblical snowstorms with relative ease. In a week’s worth of driving in predictably unpredictable Colorado weather, the Impreza never felt out of place. (Perhaps that’s because more Subarus are on the road here than anywhere else.)

Subaru’s decision to stuff a CVT in every Impreza except the base and Sport Premium models isn’t without some consternation. The rubber-band transmission constantly keeps the flat 4 in a sweet spot for mileage, but under hard acceleration and at higher speeds produces an uncomfortable amount of racket for a car built to get out of the way during a daily commute. I have driven the standard 5-speed, but I don’t prefer it, simply because it's limited to only two trims and doesn’t return a gain in fuel economy or fun to be worthwhile. I guess I’ll just have to turn the radio up. 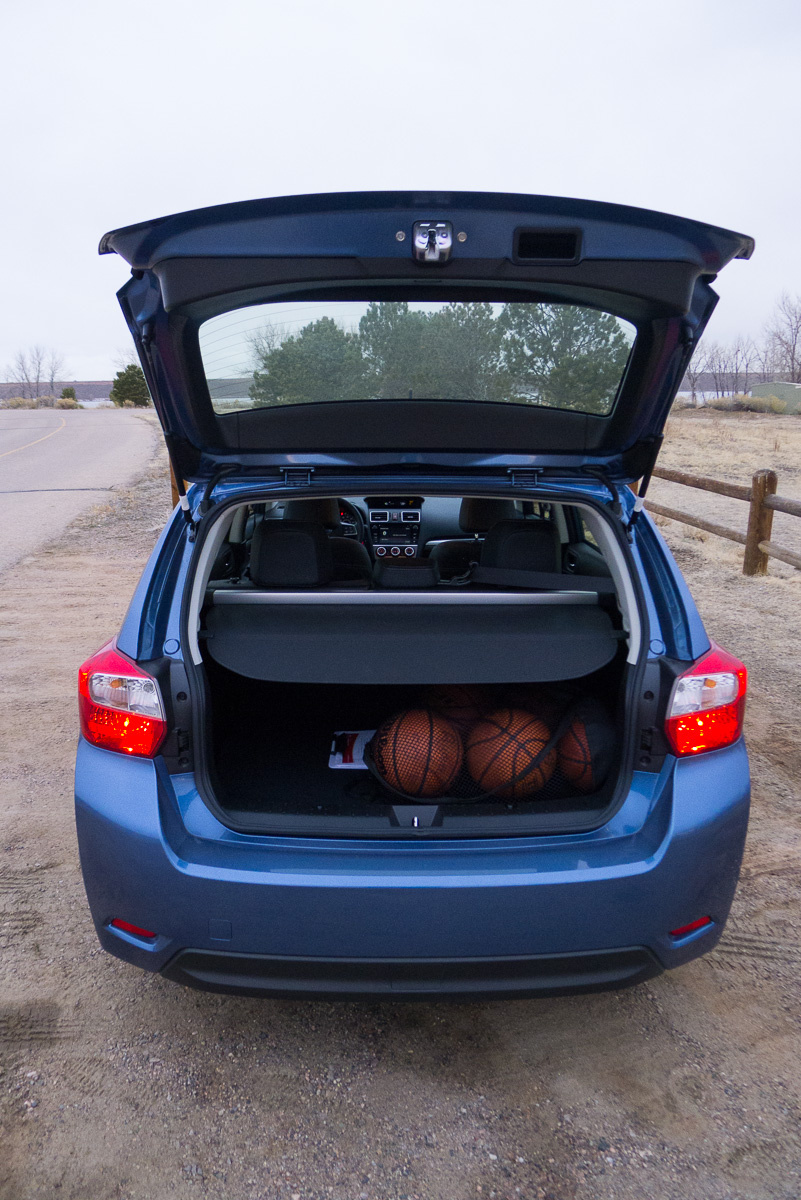 Behind the wheel, the Impreza sports the usual conveniences and conveyances one should expect from a compact commuter car. No, it won’t blow you away with its refinement or luxury, but the Impreza is eager to please with what it can offer.

The Impreza’s chassis is bright and responsive, with no discernible body roll around corners. The capable chassis served as a great starting point for the significantly sportier WRX and STI, but it’s still fun to drive the Impreza nonetheless. You may be able to read a book in the straight stuff, but at least the corners will keep you awake.

The driver’s throne isn’t particularly accommodating to large frames, but it does provide an upright view of the road to maximize the Impreza’s massive greenhouse. If you can’t see it coming through the massive windows in the Impreza, it’s time to get the ol’ peepers checked. It’s largely the same for backseat passenger room and comfort. It’s plenty comfortable for the price class it's in, but for 4 adults, it can get a little cramped after an hour or so.

Our tester, a Sport hatchback, is built on convenience of sliding cargo in and out of the rear tailgate repeatedly, folding passenger seats and doing it all over again tomorrow. I found sliding a mountain bike into the cargo area (52.4 cubic feet with the rear seats folded down, 24.2 with the seats up) was pretty easy. Stuffing a pup in the back seat was easy and just felt like a Subaru commercial. What can I say?

Although Subaru said this year’s Impreza is quieter than the last, there’s still room for improvement. Road noise is fairly significant, and the whine coming from the CVT begs for mercy. Better than last year, but room for improvement for next year. 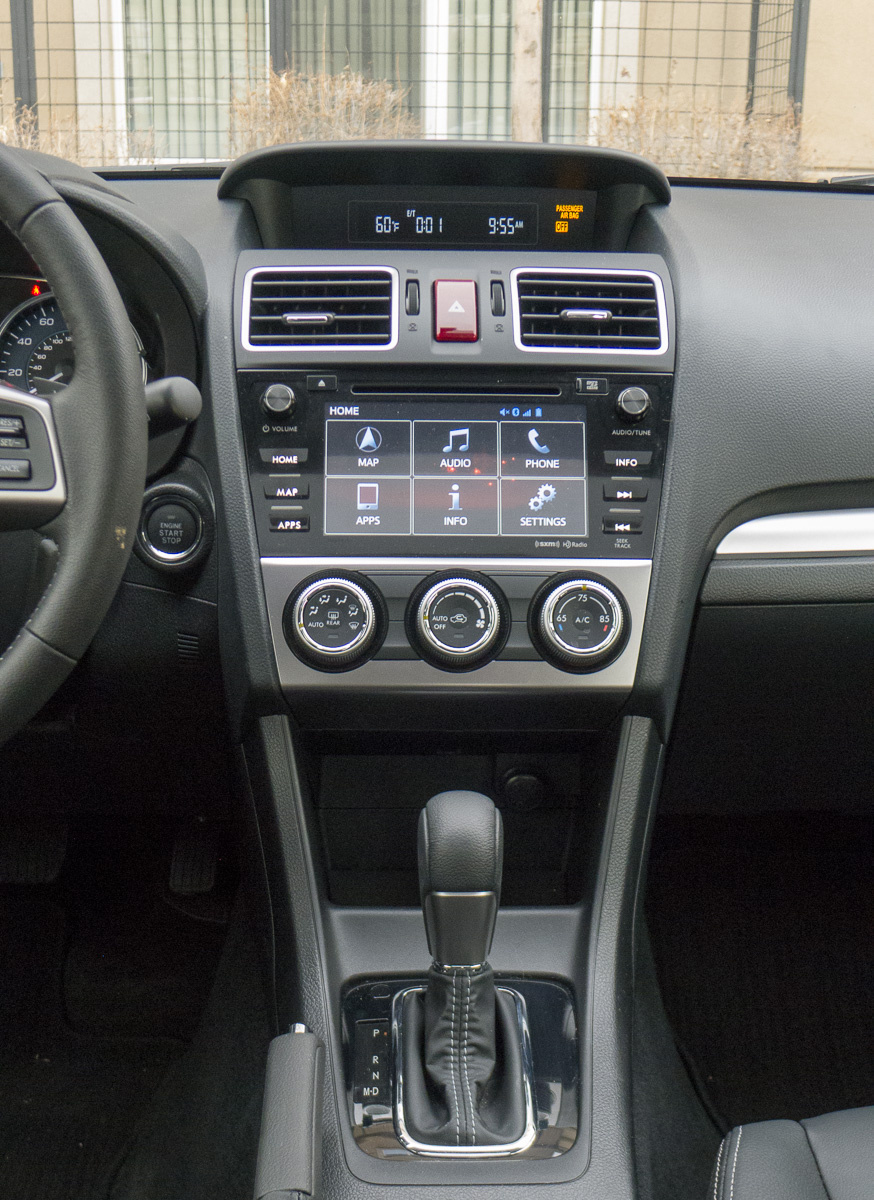 Interior tech in the 2015 Impreza is perhaps the biggest improvement over last year’s model. The addition of Subaru’s newest, 6.2-inch touchscreen infotainment system as standard, which was available in last year’s Legacy, marks the biggest improvement over the base Impreza. A 7-inch touchscreen system is available in Limited trims.

The system is bright and easy to use, with an easily readable screen—a luxury not found in many compact car systems (Mazda, I’m looking at you)—and can be quickly paired with most phones. Subaru has also made standard a rear backup camera across all models, following suit with many other carmakers.

Ergonomically speaking, the Impreza has made strides over previous years, but could use some help. The steering-wheel controls—which are in two separate typefaces, oddly—are easy to see, but a little fumbling to use. The inclusion of three smaller paddles around the 8 o’clock position on the wheel could go away without much heartache from me, and the heated seat switches could stand to not be located next to my spleen.

Standard roof racks, easy tie downs, accessible cargo space, and all that jazz still make the Impreza the most utilitarian compact on the planet. I wouldn’t necessarily hose it down like I wash my deck once a month, but you get the drift. 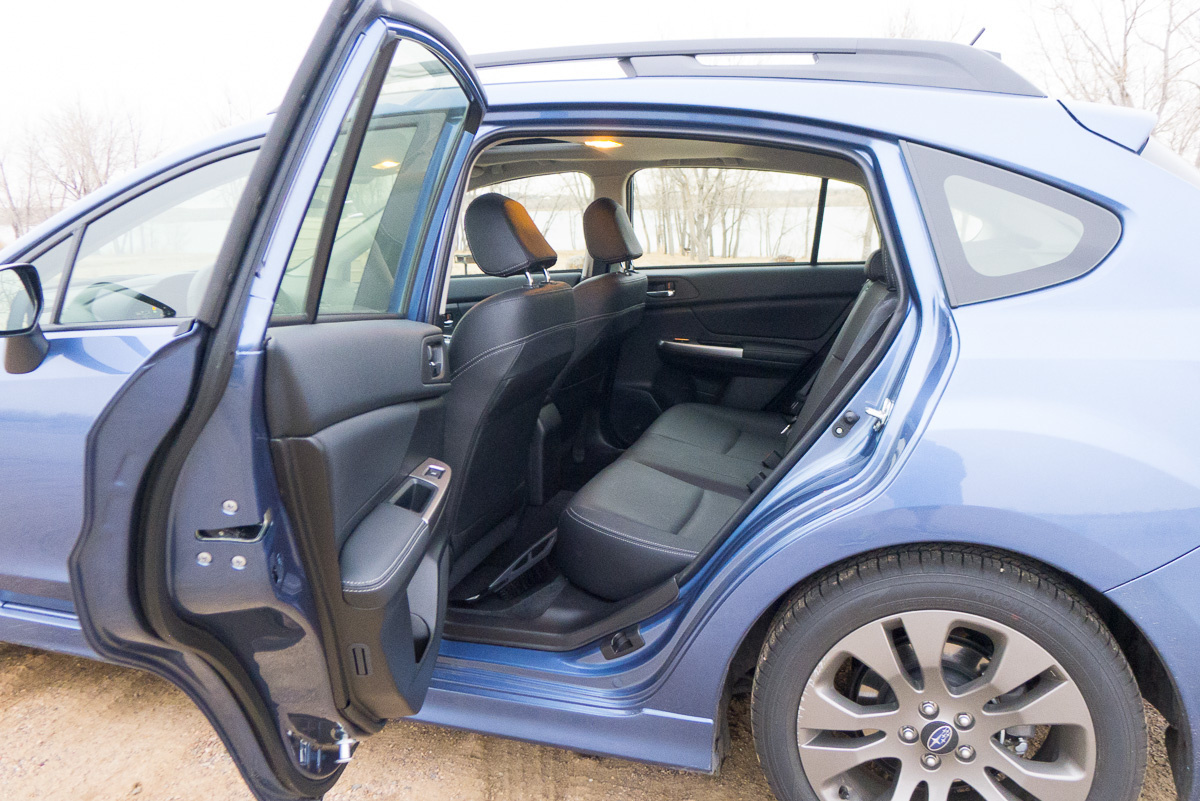 It’s possible to get carried away with the tech you can see, but it should be mentioned that Subaru has added plenty of tech you can’t see this year as well.

The 2.0i Premium trim features as standard Subaru’s newest EyeSight system, taken from the Legacy (but without rear cross-traffic alert) and stuffed just above the rear-view mirror. The system’s brain—dubbed by someone smarter than me as the “nerve farm”—doesn’t intrude into the overall visibility out of the windshield and gives the Impreza adaptive cruise control, lane-departure warning, and pre-collision braking capabilities.

The rest of the Impreza lineup comes standard with 4-wheel antilock disc brakes and stability and traction control. The Insurance Institute for Highway Safety gave the Impreza a Good rating with a Superior mark for frontal crash prevention. The National Highway Traffic Safety Administration gave the Impreza an overall 5-star rating for safety as well. 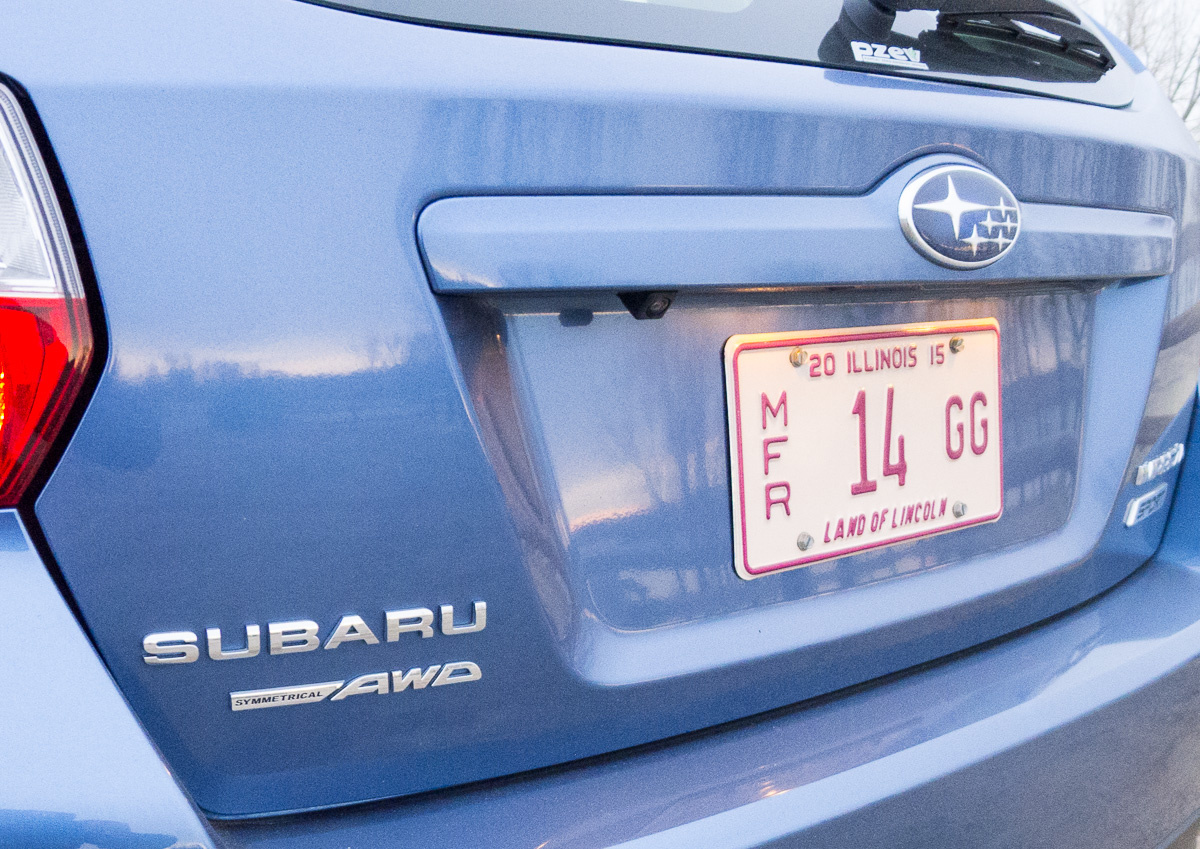 Starting at just over $18,000 and topping out near $27,000, the Impreza provides a good value-for-money proposition compared to many automakers’ compact models.

Although some buyers have noted that the looks are more “leave it” than “love it,” the sleeker styling for 2015 should assuage some buyers from feeling like “Impreza” and “hideous” have more in common than the same number of letters. From the inside, where many buyers spend most of their time, the Impreza is bright and non-threatening and easily one of the most capable compacts on sale right now.

Kelley Blue Book named Subaru one of its best brands to own because of its high resale value and low cost of ownership. Subaru also has a large brand following and loyalty when compared to other automakers.

What's your take on the 2015 Subaru Impreza?

Cruzin21 Subaru, in my opinion, has blown it big time. You can only get the WRX in a sedan. The Legacy hatchback with a wimpy 2.0L normally aspirated engine does nothing for me and many enthusiasts. I don't want a sedan. I want a powerful hatchback. Going to go look at the VW type R. New or used.

AaronCole I think you may be talking about the Impreza hatchback, but your point is well made. There's a lot of chatter about a WRX and STI hatchback coming back to the states at some point — but it remains to be seen if that'll ever happen.

James I too like the idea of a VW GTI. However, the reliability and electronic niggles that will bother me the rest of the time I own it are just not going to sway me. I'll take the Impreza HB over a Honda Civic, I think. It's good enough and I can make some changes on my own to the springs, shocks and stereo to make it a bit more livable.

Users ranked 2015 Subaru Impreza against other cars which they drove/owned. Each ranking was based on 9 categories. Here is the summary of top rankings.

Have you driven a 2015 Subaru Impreza?
Rank This Car

Was driving my car and suddenly the engine start making a loud clicking and the front end was vibrating violently. Had a Subaru specialist look at it and said a cheap oil filter could have destro...

ThatDamnImpreza asked a 2015 Subaru Impreza 2.0i Car Customization question about a year ago

Do I Need Tire Pressure Sensors In Aftermarket Wheels

I want to get aftermarket wheels for my car, do I need the tpms sensors, or can I live without them? Will not having them do anything other than trip the light?

I have a 2015 Subaru Impreza 2.0i and would like to make it more fun and exciting to drive but no parts for it can I put sti or wrx parts on it any help would be great! I know it won't be perfect b...

Does the 2015 subaru impreza sedan have a timing belt or timing chain. And when should it be replaced.