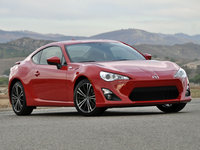 A Scion FR-S isn’t meant to coddle its driver or to make productive trips to the big-box store. This is clearly a car meant to be driven hard… and fast. 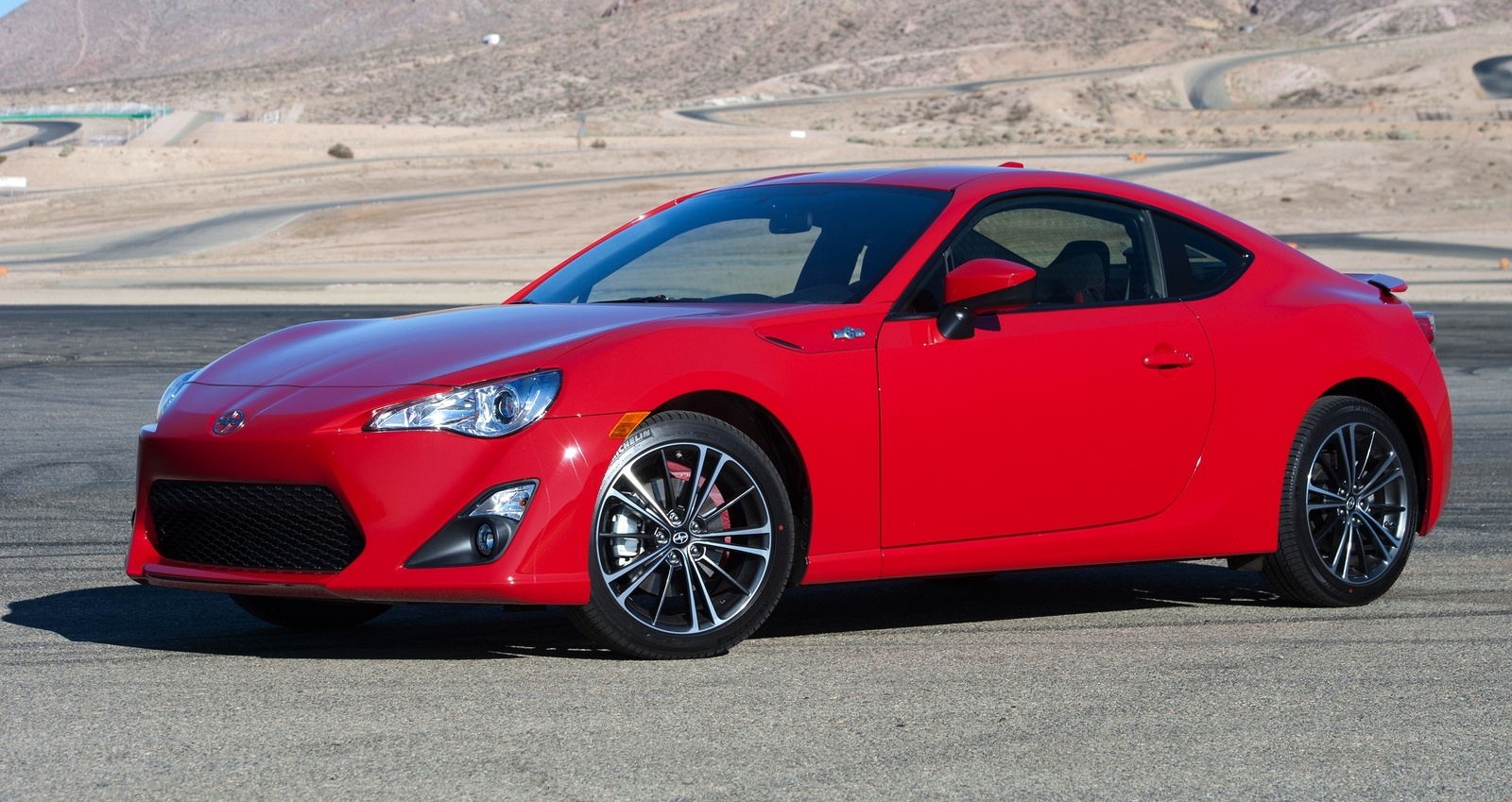 The 2015 Scion FR-S is a true sports car, easily putting a big fat grin on your face as you’re taking a corner on your favorite twisty road. But its lack of practicality means either that you don’t have any kids or that you also own a different vehicle that's more suitable for the real world. 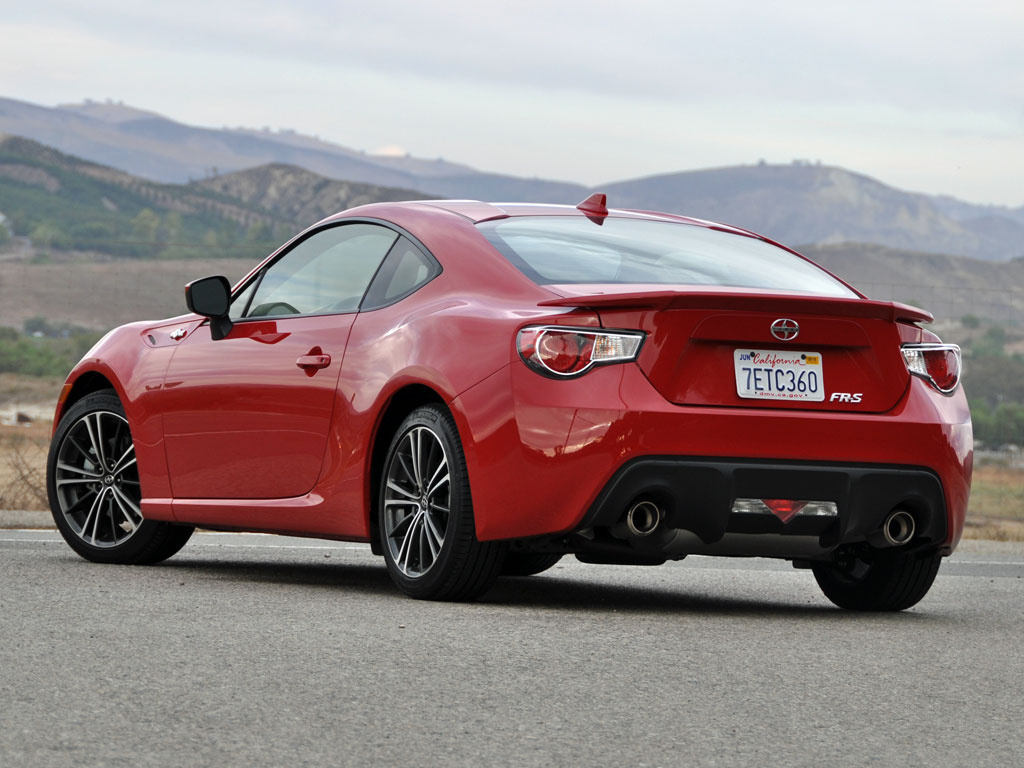 Automotive trends are leaning toward vehicles that can be all things to all people. You’ve got crossovers that blur the lines between SUVs and wagons, pickup trucks that rival luxury cars for their ability to coddle and midsize sedans that get amazing fuel economy. That’s why it’s somewhat refreshing to drive a car as singular in its purpose as the 2015 Scion FR-S.

With its low-slung styling and aggressive looks, there’s no mistaking this car’s intent. A Scion FR-S isn’t meant to coddle its driver or to make productive trips to the big-box store. This is clearly a car meant to be driven hard… and fast.

The problem, of course, is that there are similarly athletic alternatives that can also perform family- and/or cargo-hauling duties when necessary, in particular the excellent Ford Focus ST and Volkswagen GTI. By contrast, owning a Scion FR-S signifies that you don’t have parental responsibilities or need to worry about such pedestrian issues as practicality, perhaps appropriate given changing American demographics that indicate most adults in the U.S. are now single rather than married.

If you’re kid-free and don’t ever need to worry about carrying home a 55-inch LED television following a Black Friday sales event, or you simply enjoy the luxury of having a second or third car to drive just for fun, the Scion FR-S is worthy of consideration, especially thanks to its affordable price.

Starting at just $25,670, the Scion FR-S comes with plenty of standard equipment, including 17-inch alloy wheels, power accessories, air conditioning and a 6.1-inch touchscreen infotainment system with Bluetooth connectivity and audio streaming, HD Radio, a USB port and an 8-speaker sound system. Scheduled maintenance stops are also covered for the first 2 years and 25,000 miles of ownership.

To upgrade an FR-S, buyers can opt for an automatic transmission and a premium infotainment system with navigation, Aha Internet services, and access to social media platforms right from the car’s dashboard. Additionally, a number of cosmetic, functional and performance-enhancing accessories are available through the dealer.

My standard-issue test vehicle had the automatic transmission, the BeSpoke Premium infotainment system, fog lights, a rear spoiler, a sliding center-console armrest and a few other items for a grand total of $29,570, including the $770 destination charge. 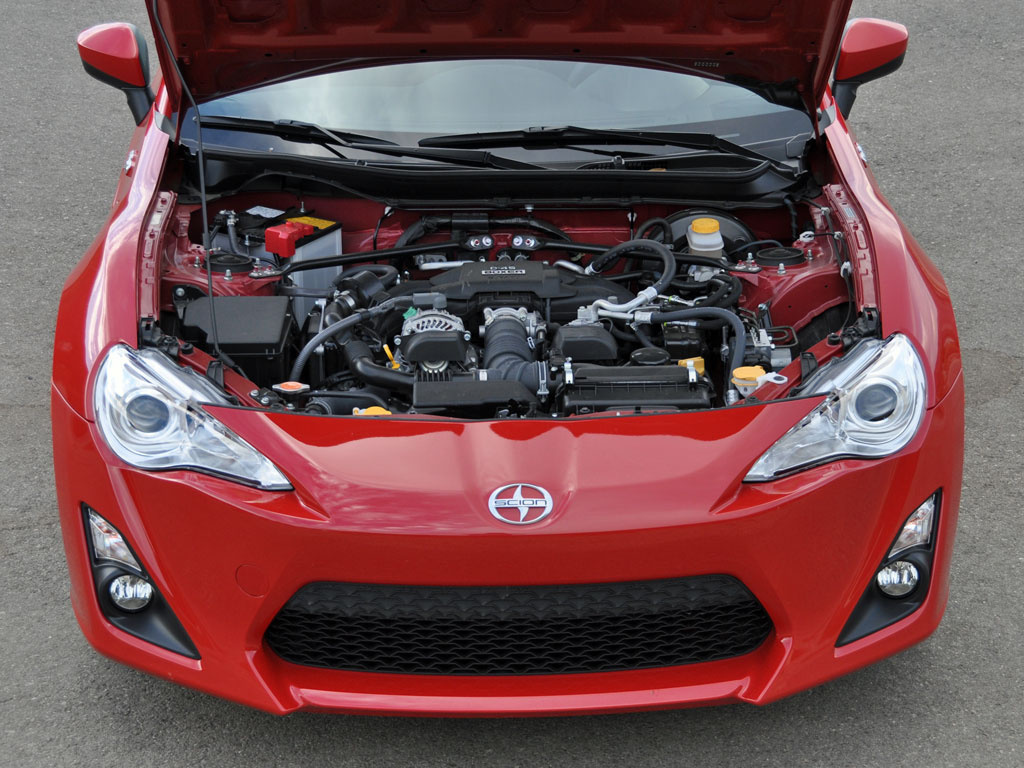 Any nimrod can go fast in a straight line, even in a minivan. But when it comes to applying the basic laws of physics to travel on four wheels, most people quickly get in over their heads. While the FR-S might not necessarily be fast in a stoplight drag race, it is more capable than most affordable performance cars of rounding corners with precision and executing drama-free stops, making this one fun little car to thrash.

An angry-sounding 2.0-liter horizontally opposed (boxer) 4-cylinder engine thrums under the hood, capable of producing 200 hp, enough to get this lightweight, 2,758-pound car up to speed with plenty of oomph left in reserve. The engine drives the rear wheels through a 6-speed manual gearbox or, as was the case with my test car, a 6-speed automatic transmission with paddle shifters.

While it might initially seem wrong to get a slush box in a car like the FR-S, those feelings are misguided, as the optional automatic does not detract from the driver’s enjoyment in any way. Shifting quickly and cheerfully, kicking down a gear or two responsively, and matching revs along the way while keeping the engine spinning in the thick of its sweet spot, this transmission performs beautifully while returning superior gas mileage.

On the sinuous blacktop that threads its way across the Santa Monica Mountains, the FR-S shines brightly thanks to its performance-tuned MacPherson strut front and double wishbone rear suspension, which is revised for 2015 to improve handling. In my experience, the FR-S cornered flat and true, rotating perfectly around tight corners and expertly transitioning weight between S-curves. The twitchiness of the 2013 and 2014 models is gone, and now the FR-S is a supremely capable and perfectly planted vehicle.

The stiffened front suspension also has a positive impact on the car’s steering. Although heavy around town and in parking lots, it proves telepathically precise when shifting directions at speed. The car’s 215/45R17 summer-tread tires contributed to the Scion’s flawless mountain-driving performance, and the 4-wheel ventilated-disc brakes exhibited nary a hint of fade.

As might be expected of such a singularly purposed sports car, however, the ride quality isn’t great, with plenty of harshness and noise invading the cabin while simultaneously jarring passengers, especially over pimply pavement. 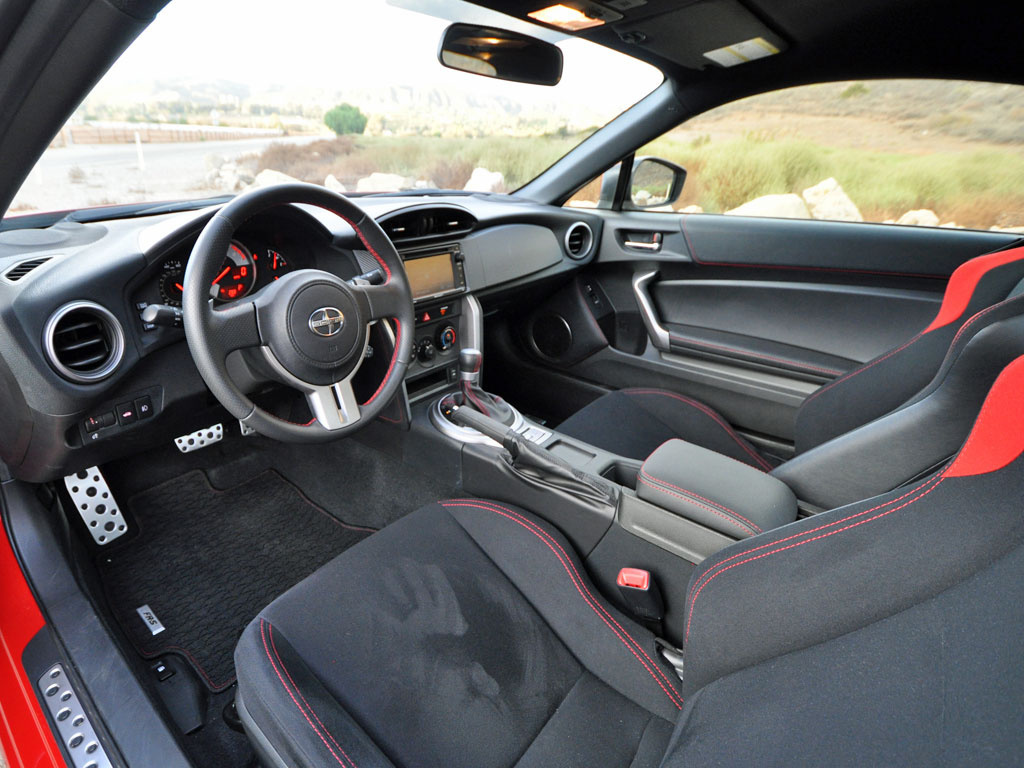 As you slide into the FR-S, remember to manage your expectations. This is not a posh car or one bristling with the latest infotainment features. Rather, the FR-S features a minimalist approach to interior design, offering the bare minimum of features in order to qualify as a modern vehicle. There are some upscale touches sprinkled about the cabin, such as the carbon fiber trim patterns, a soft dashboard trim panel and sporty splashes of red on the front seats and in the exposed stitching. Mostly, however, this car’s interior makes it clear that Scion spent its money on the underlying engineering.

The front seats happen to be exceptionally comfortable, though, with some serious side bolstering to keep your body in place while fighting the forces of lateral gravity. Scion also recognizes that drivers use their left leg as a brace when cornering, so there’s a nice padded surface on the door to improve comfort when pushing limits. The center console armrest, an additional cost item, is hard and uncomfortable, and can also get in the way of your right elbow when working the steering wheel. Visibility is decent for a car of this type, but I sure wished for a rear-view camera system.

While this is technically a 4-passenger vehicle, only those who are into masochistic levels of confinement will find the FR-S’s rear seats of any use. Even my little kids balked at spending any amount of time in there, despite the fact that I repositioned the front seats to give them more room to breathe. Better to simply fold the rear seat down and expand the small trunk beyond its paltry 6.9 cubic feet of space. 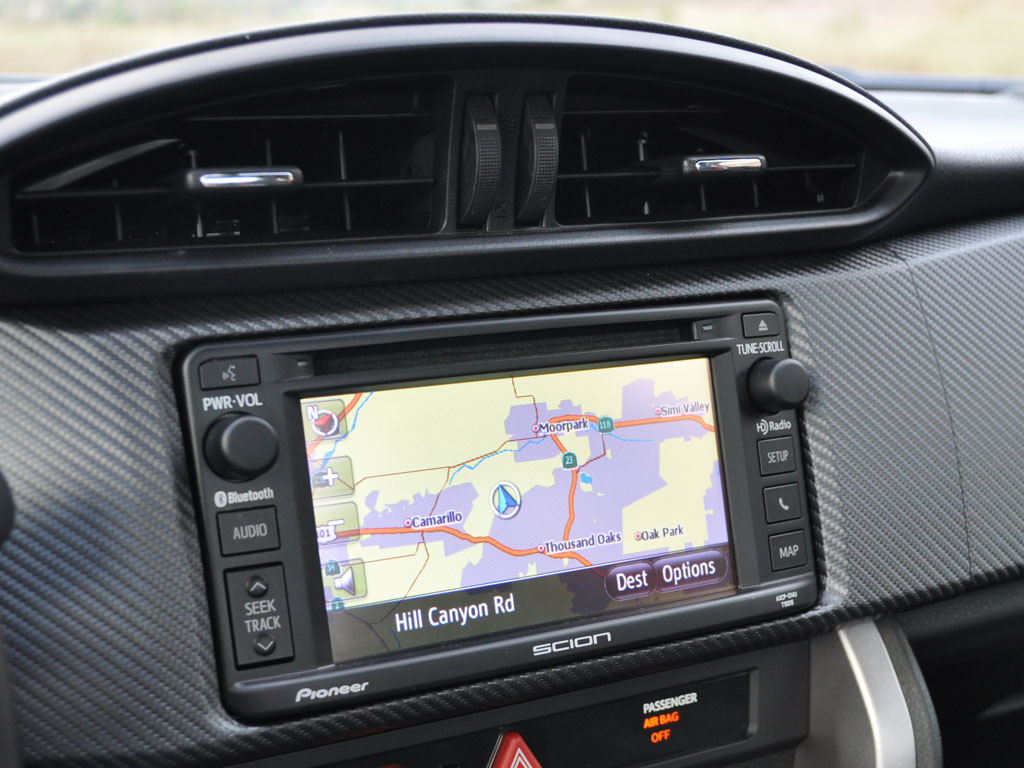 When it comes to the latest technology, the Scion FR-S is humbly simplistic. A touchscreen infotainment system is standard equipment, featuring a 6.1-inch screen, Bluetooth hands-free calling and music streaming, HD Radio and a USB port. Other than this, the FR-S offers little in terms of standard technologies.

My test car had the optional BeSpoke premium touchscreen infotainment system, which included voice-activated navigation, Aha Internet services via iTunes7 and Google Play, and access to social media platforms including Facebook and Twitter. Location-based services also help the FR-S’s owner to find local restaurants, coffeehouses and hotels and to check weather information. Pairing my phone to the system was fairly simple and intuitive, but the small buttons combined with the car’s stiff suspension often made performing simple tasks an exercise in frustration. 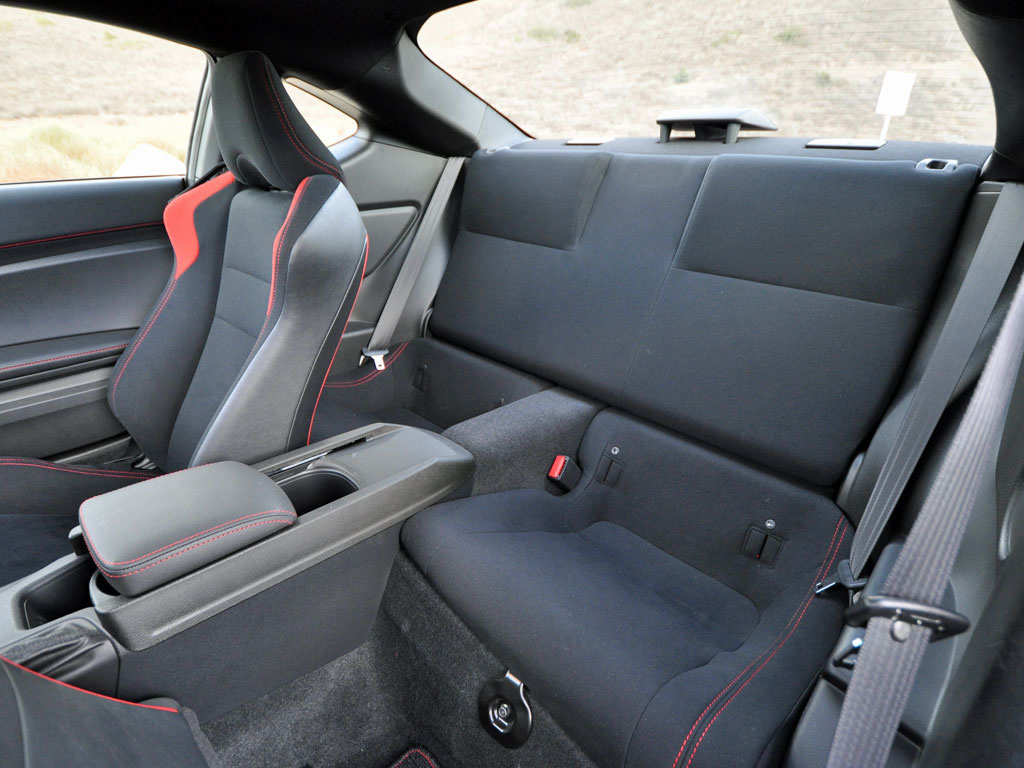 Similarly, this Scion lacks anything more than the basics when it comes to safety technologies. Aside from a stability control system that allows for an impressive level of foolhardiness before stepping in to get the car under control, there are no additional safety features worth mentioning, not even a reversing camera.

Inexplicably, the National Highway Traffic Safety Administration (NHTSA) gives the FR-S an overall crash-test rating of 5 stars, the highest rating possible. When you dig into the details, you find that in the most important measures, the car gets 4-star ratings for frontal-impact protection and a mediocre 3-star rating for the driver’s side-impact protection. True, the FR-S does get a 5-star side-impact rating for rear-seat occupants, but this is all but irrelevant, since nobody is likely to ever ride back there.

The news isn’t all bad when it comes to crash-test performance, though. The Insurance Institute for Highway Safety (IIHS) gave the 2014 Scion FR-S a Top Safety Pick rating, thanks to the car’s Acceptable rating in the small overlap frontal-impact test. Since no structural changes have been made for 2015, this rating should carry over from last year. 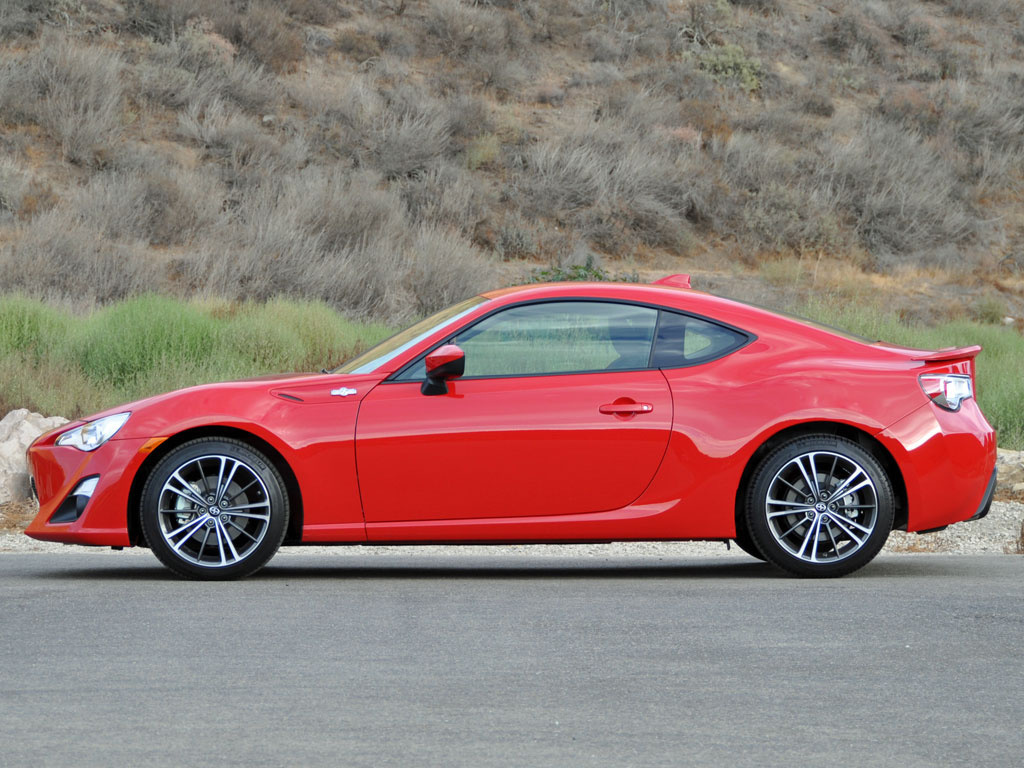 Call this car a cheap thrill if you will, but that’s what it is. Not only is the sticker price affordable, Consumer Reports thinks this car will prove inexpensive to own, certainly due in part to the free Scion Service Boost program, which covers scheduled maintenance for the first 2 years or 25,000 miles of ownership. Plus, ALG says the FR-S will hold its value over time.

Oddly, though, considering that the Scion FR-S is the result of collaboration between Subaru and Toyota, reliability predictions are unfavorable based on early quality glitches with the 2013 model year versions. Our bet is that over time a Scion FR-S will prove just as hardy as your average Toyota, but you should be aware of these negative predictions from Consumer Reports and J.D. Power.

As far as fuel efficiency is concerned, the Scion FR-S allows you to have your cake and eat it, too. The EPA expects the FR-S to return 25 mpg in combined driving with the manual gearbox and 28 mpg with the automatic transmission. I got 28.3 mpg, but that reflects many highway miles and, apparently, good times driving the FR-S hard… and fast.

Anthony As Liz Kim said “ This is clearly a car meant to be driven hard… and fast.” honestly no. The car only comes stock with 204 HP which is not fast at all. The car is stylish and fun to drive with great handling. My FR-S gets around 31 mpg. Its my every day driver and I love every second of it.

Users ranked 2015 Scion FR-S against other cars which they drove/owned. Each ranking was based on 9 categories. Here is the summary of top rankings.