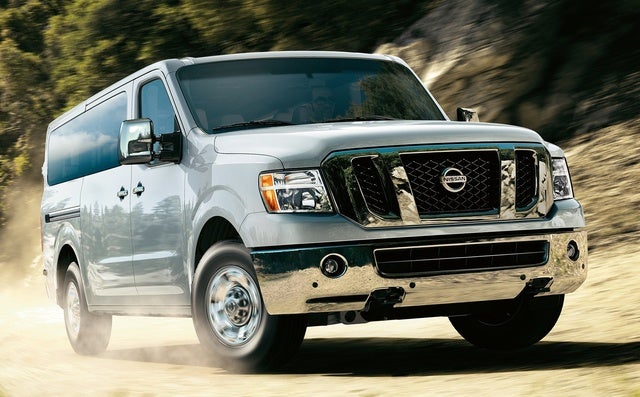 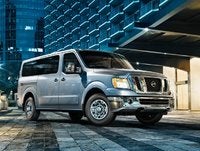 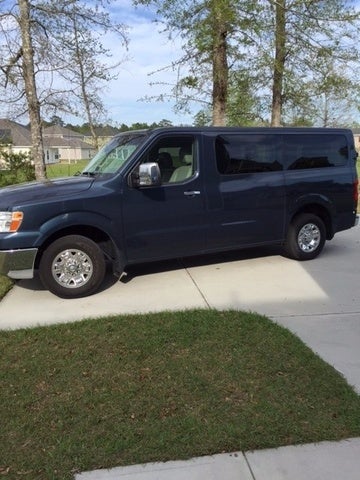 Getting a lift to the airport with all your stuff? Chances are pretty good that your ride will be the 2015 Nissan NV Passenger van. This 12-seat full-size people-hauler looks tough and capable yet civilized, which may be just the thing for those who don’t want their trepidations about flying to kick in till they’re actually on the plane. And with 28.9 cubic feet of cargo space behind the fourth row of seats, you can be fairly sure that if luggage is lost, it’ll be the airline, not the limo service, at fault. Meanwhile, the 3 rear rows of seating can be configured in up to 324 variations, though to reach the NV Passenger’s maximum 218.9 cubes of cargo-toting capacity, all rear seats must be removed.

Anyhow, this hefty van again comes in three trims: the base S, the midlevel SV, and the top-shelf SL, all of which are mounted on the beefy one-ton 3500 HD frame, as opposed to the cargo version of this workaholic (reviewed separately), which remains offered in half-ton 1500 iterations and three-quarter-ton 2500 versions, as well as in 3500 trims. Additionally, expect the 2015 NV Passenger to return only with rear-wheel drive (RWD) and with the sole significant change for 2015 being a marginal upgrade in the available NissanConnect technology to improve navigation and mobile apps functionality.

Power-wise, the 2015 NV Passenger S and SV versions remain packing a standard 261-hp 4.0-liter V6 engine that’s managed by a 5-speed automatic transmission to put out 281 lb-ft of torque. Towing with the V6 is maxed out at 2,000 pounds with the standard hitch aboard, but an available towing package bumps total hauling capacity to 6,200 pounds. Payload, meantime, tops out at 2,645 pounds. Alas, because the EPA does not evaluate mileage for up-sized vehicles, no fuel efficiency numbers are available.

Should more oomph be needed, the flagship NV Passenger SL is delivered with a standard 5.6-liter V8 powerplant that again combines with the 5-speed automatic to pound out 317 hp and 385 lb-ft of torque. This drivetrain also remains optional in the 2 lower trims, and with an available Class IV towing package installed, remains capable of pulling up to 8,700 pounds of trailer, not to mention a payload capacity that again maxes out at 2,601 pounds.

Appearance features for the base S trim, meanwhile, include 17-inch steel wheels, a roof rack, power-adjustable outside mirrors, a sliding rear side passenger door and rear barn doors. Inside, look for standard cloth upholstery, a fold-down front passenger seatback, air conditioning, a tilt-adjustable steering wheel, and a single-CD player with 4 speakers.

Options-wise, lower trims again remain eligible for a number of features that come standard in higher trims as optional equipment, while further noteworthy options remain HD and satellite radio and upgraded NissanConnect navigation and smartphone apps, all of which remain slated for select trims.

What's your take on the 2015 Nissan NV Passenger?

Users ranked 2015 Nissan NV Passenger against other cars which they drove/owned. Each ranking was based on 9 categories. Here is the summary of top rankings.

Have you driven a 2015 Nissan NV Passenger?
Rank This Car