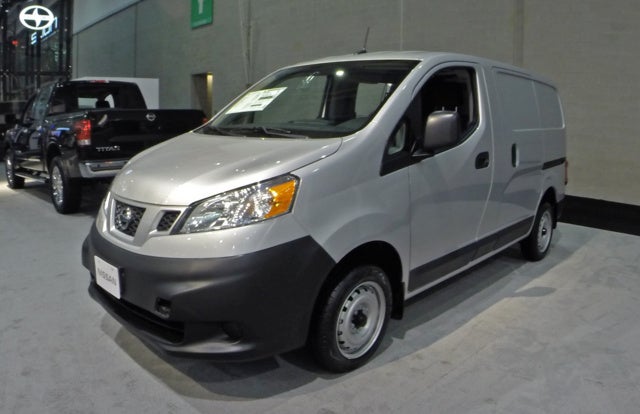 Offering plenty of passenger and cargo room, a choice of engines, and an unusually well-equipped cabin, the 2015 Nissan NV Cargo full-size work van handles those toting jobs that the once untouchable Ford E-Series and Chevy Express lineups used to claim.

Oriented to the tradesperson or delivery service, this 2-seat pack mule comes in 3 sizes: the half-ton 1500, the three-quarter-ton 2500, and the 1-ton 3500. Trim levels include the base S, the now-midlevel SV, and the new-for-2015 SL. Additionally, this hefty hauler, in 2500 and 3500 iterations, can be delivered with a pair of roof heights: the standard height (83.9 inches high) and the High-Roof version (105 inches in height). Both heights allow unstooped movement in the cargo bay for the average-size adult. Stowage acreage runs 234.1 cubic feet in the standard roof versions and a whopping 323.1 cubic feet in the High Roof variants. Oh, and this big van is only available with rear-wheel drive (RWD).

Some further added styling touches and a few tweaks to the available Nissan Connect telematics also grace the latest edition of the NV Cargo stable.

The base engine, standard in the 2015 NV Cargo 1500 and 2500 variants, remains a 4.0-liter V6 powerplant. Combined with the standard 5-speed automatic transmission, this peppy 6-cylinder puts out 261 hp and 281 lb-ft of torque—good enough to tow up to 7,000 pounds of trailer when properly equipped. Payload maxes out at 3,175 pounds. Mileage is unavailable as this bulky Nissan, weighing in at over 5,800 pounds, doesn’t qualify for EPA tests.

Standard appearance adornments in the 2015 NV Cargo include 17-inch steel wheels, a roof rack, and a sliding rear passenger-side cargo door. The new SL trim level adds some extra standard chrome pieces and heated extendable tow mirrors to the list. The 2500 V8 and the 3500 trims again come delivered with a trailer hitch and wiring.

Inside, look for premium cloth upholstery, a fold-flat passenger seat, tilt-wheel steering, and air conditioning to come standard across the lineup. Nissan offers entertainment via a single-CD player with 2 (in the S) or 4 (in the SV and SL) speakers. Meanwhile, both the SV and the brand new SL toss standard cruise control, rear parking sensors, full power accessories, and a driver-side under seat slide out storage bin onto the pile.

Users ranked 2015 Nissan NV Cargo against other cars which they drove/owned. Each ranking was based on 9 categories. Here is the summary of top rankings.

Have you driven a 2015 Nissan NV Cargo?
Rank This Car

Which Fuse Controls Rear License Plate Light, And Where Is It Located

Where Is The Fuse For The Diagnostic Connector In a 2015 Nissan Nv200 Cargo...