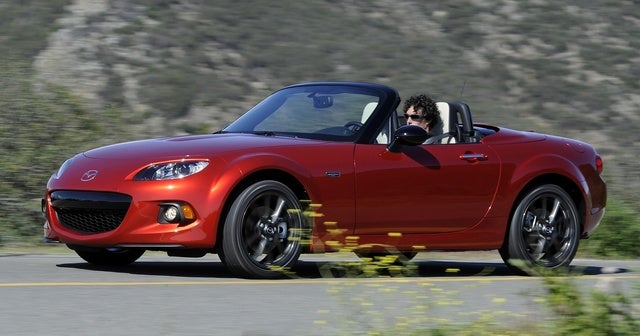 Average user score
4 ⁄ 5 stars
Based on 3 reviews
Review by Rikjay — Great model. Mazda messed up when they changed it in 2016. Read more 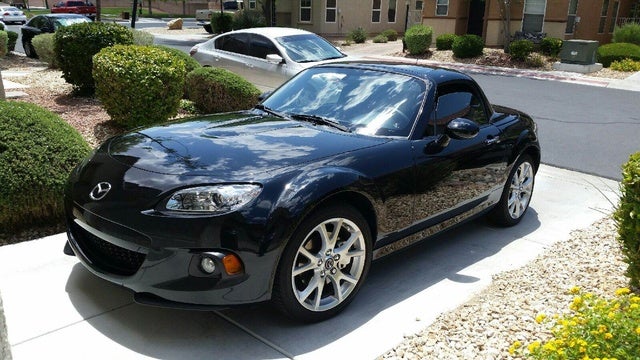 Look for Mazda to trundle its super-popular MX-5 Miata into 2015 with a few extra perks added to this sport-oriented third-generation compact 2-seat convertible. By far the most notable change for the upcoming model year is the introduction of the MX-5 Miata 25th Anniversary Edition that’ll be added to the trim lineup. This sexy new trim now sits at the top of a lineup that reprises the base Sport Convertible, the midlevel Club Convertible and the once-flagship Grand Touring Convertible. Unfortunately, only 100 of the up-featured 25th Anniversary Editions were produced for the U.S, and they sold out in 10 minutes through a lottery-style offering on Mazda’s web site that began (and ended) in May of ‘14. Thus for all but those lucky Centurions, the dream of owning a 25th Anniversary Edition MX-5 Miata convertible is just that.

Also new this year is a cloth convertible roof that replaces the vinyl roof of yore and that will remain standard on all trims except the power-hard-top-convertible-only 25th Anniversary Edition. Of course that power-opening hardtop convertible roof will remain available to each of the midlevel MX-5 Miata trims. Alas, stowing either drop-top cuts trunk capacity to a mere 5.3 cubic feet, so think long and hard before you offer to schlep Aunty Mabel and her luggage… and her little dog, too… to and from the airport.

Finally, there have been whispers that an available Suspension Package will also be introduced for 2015, but details are thus far nonexistent. In any case, all these cool runners will once again be delivered in only the traditional rear-wheel-drive (RWD) configuration and will continue to outmaneuver just about anything in the family-priced sports-car market.

Keeping in mind that these little rag-tops are just that, little, anyone over 250 pounds and above 6 feet tall will likely feel a bit cramped inside, especially with the top up. Nevertheless, this pint-size runabout packs a fair amount of bling. In the base Sport Convertible, you can expect, besides that new manually opening cloth convertible roof, standard 16-inch alloy wheels, cloth upholstery, power windows and door locks, and tilt-wheel steering. Standard air conditioning should also return, as should the leather-and-alloy steering wheel and the AM/FM stereo with its 6 speakers and auxiliary audio input.

Options, depending on the trim selected, include an Appearance Package with front air dams and a rear underskirt, as well as the Premium Package, flaunting high-intensity-discharge (HID) headlights, satellite radio, keyless entry and ignition, and a remote antitheft alarm. As mentioned, a new Suspension Package is also in the works for 2015, while the power hardtop again remains available to both midlevel trims.

For 2015, the sole engine offered in the MX-5 Miata lineup remains a 2.0-liter inline 4-cylinder (I4) that mates with either a 5-speed manual transmission that’s standard in the Sport Convertible trim or a 6-speed manual offered standard in all other trims. All trims, meantime, return (or debut) eligible to tote an available 6-speed shiftable automatic transmission. Anyhow, whatever the transmission selection, this peppy 4-banger is slated to put out 158 hp and 140 lb-ft of torque in the traditional trims, with the 25th Anniversary Edition tweaked for a few added ponies (167) bringing out some extra alacrity in the gas pedal. Mileage estimates should again run 22 mpg city/28 highway with the 5-speed stick-shift versions and 21/28 with either the 6-speed manual or the 6-speed shiftable automatic variants.

Standard safety features for the 2015 MX-5 Miata lineup, meanwhile, are expected to include 4-wheel antilock brakes (ABS), traction and stability control, side-mounted airbags with head protection chambers and front fog/driving lights. Look for the remote antitheft alarm that’ll be standard in the 25th Anniversary Edition to remain optional for both the Club Convertible and the Grand Touring Convertible.

Users ranked 2015 Mazda MX-5 Miata against other cars which they drove/owned. Each ranking was based on 9 categories. Here is the summary of top rankings.

2015 Mazda Miata MX 5 Grand Touring: first hint of a problem-the brake lights stayed on when the car was not running. Lifted the brake and the lights went out. Second indication: cruise wouldn't ...

Tying to replace door speakers and need to know how to remove the door panel. I have done this on a 2008 MX-5, but the door panels on the 2015 MX-5 are different. Do you have instructions for this?

What Can I Do When Dealer Deliberately Harms Your Car?

This back right flange was clearly deliberately bent back over the adjustment cam. No scratches under the car, no embedded cement, this metal flange is behind the other which should have gotten hit ...