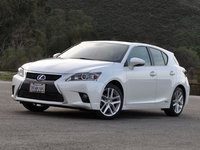 Sometimes all that matters is how the monthly payment fits into a budget, and Lexus seems to get that, in the process making what should be a tough sell instantly more appealing. 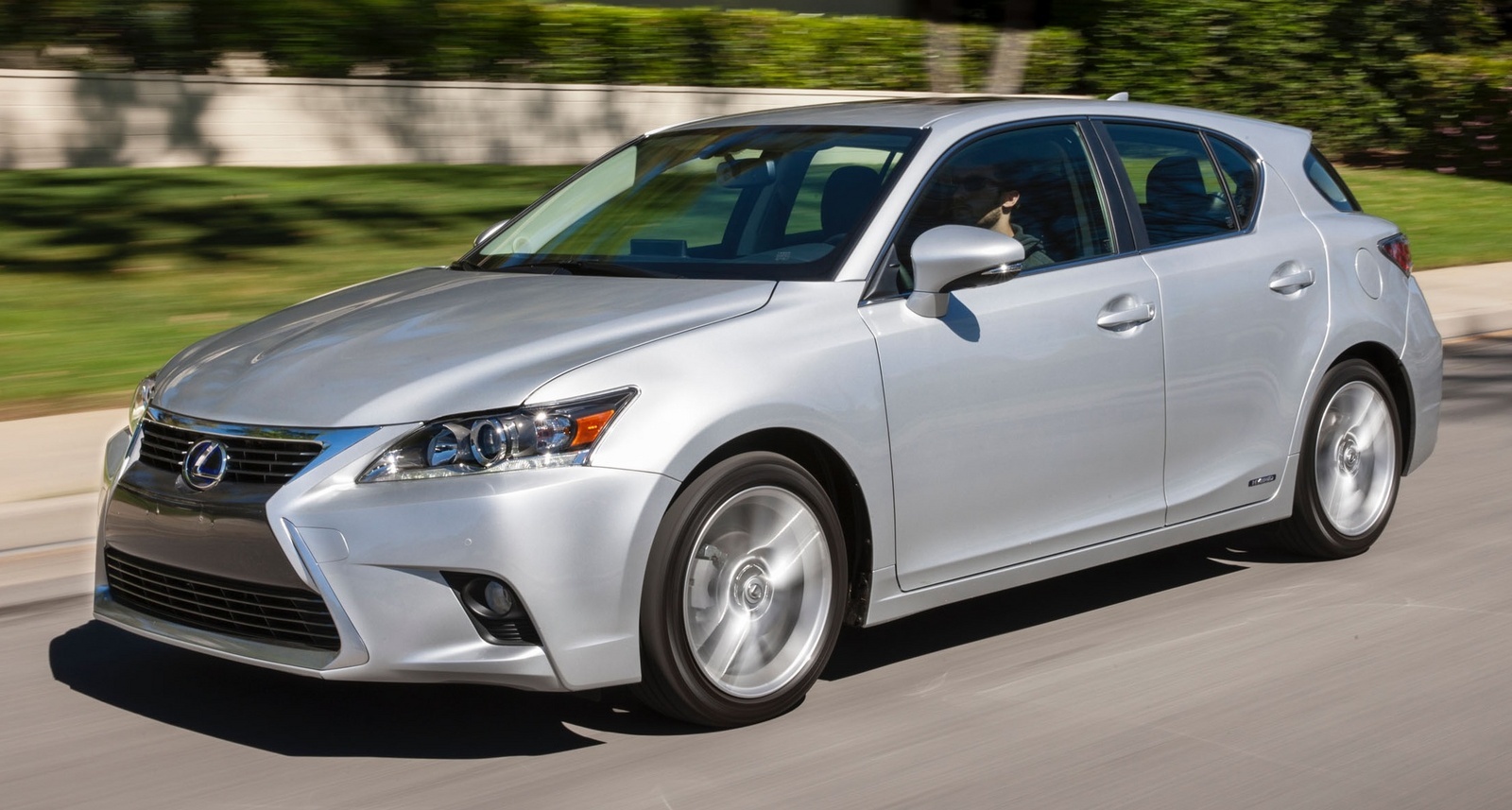 The Lexus CT 200h is not without merit. It is a Lexus. It gets terrific gas mileage. The interior is quite nice. And hatchbacks always help to make life easier. But to be completely up front and honest, we’d rather get a loaded Volkswagen Golf TDI. 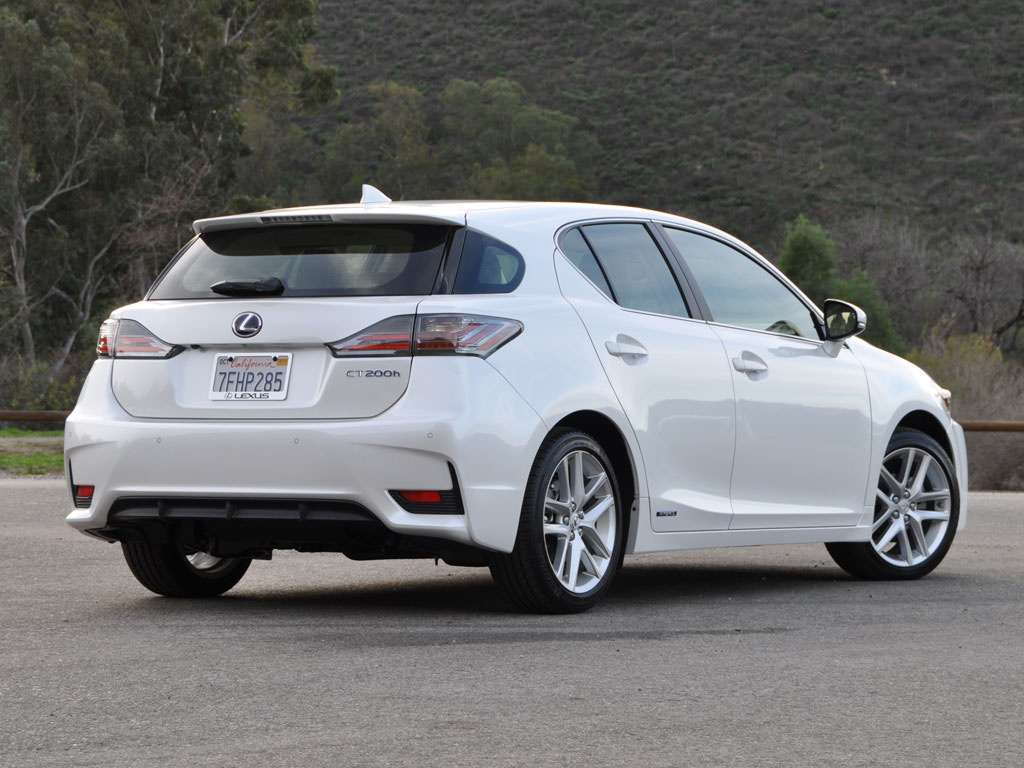 Thanks to the democratization of style, comfort, and technology across all vehicles regardless of price, “luxury” is increasingly difficult to define. Aside from the cachet associated with a brand, and the price to be paid, luxury is more commonly rooted in engineering and quality than anything else.

Quality is what rescues the 2015 Lexus CT 200h from serving as a punch line to a joke. Based on the same running gear that’s tucked under a Toyota Prius, and wrapped in appealing if not quite attractive styling, this 5-door hatchback contains a cabin that is clearly different and definitely more upscale than any Prius.

From the soft and supple optional leather seats to the sophisticated control layout, it is the CT 200h’s premium interior that allows it to credibly serve as the entry point to the Lexus lineup. Better yet, a CT 200h owner experiences this style and quality every single time he or she gets behind the wheel.

Lexus offers the CT 200h in standard and wildly optimistic F Sport trim levels. Prices start at $33,125 (including a destination charge of $925), and if you add every option you’ll be spending more than $40,000—before dipping into the deep well of dealer-installed accessories.

Put it all together, and my test car came to $38,795. I think. Lexus offers different permutations of its vehicles based on region, and the automaker’s consumer website says that leather and a navigation system are not available inside the same car in my Southern California zip code. That would make absolutely no sense, though, because leather and navigation go together in a luxury car like peanut butter and jelly in a sandwich. 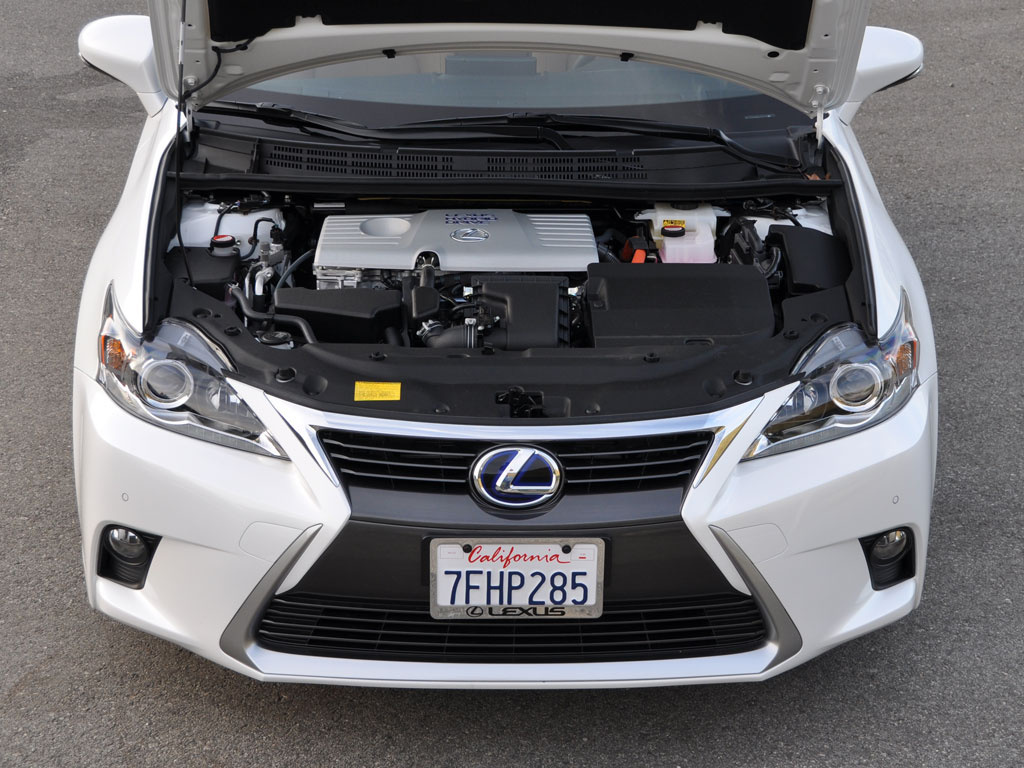 Speaking of the Lexus website, it says the CT 200h “eats asphalt” and “sips fuel.” That’s partially accurate. Rated to get 42 mpg in combined driving, my CT 200h test car returned 41.4 mpg with the powertrain placed in Sport mode the majority of the time. Not too shabby.

While the CT 200h definitely feels more energetic than expected, it doesn’t quite “eat asphalt.” I’d say it grazes or noshes at best, as evidenced by a 9.8-second acceleration time to 60 mph, according to Lexus.

I kept my test car in Sport mode nearly the entire time, switching to Eco mode only to discover that the car responded to the change like a boat suddenly dragging an anchor. In Normal mode, the CT 200h merely felt dull and disengaged. The droning of the CVT doesn’t help, but the transmission does include an engine braking mode perfect for driving down mountain grades.

Ride quality is stiff, and this is a loud car on the highway. If you’re looking for a traditional Lexus isolation chamber, the CT 200h ain’t it. The brake pedal isn’t much fun to use, either, thanks to the regenerative braking system. Sticky and hard to modulate, the pedal makes it almost impossible to bring a CT 200h to a clean, jostle-free stop.

As far as handling is concerned, all the battery weight snugged down low in the CT 200h’s chassis combined with a relatively firm suspension and decent grip from the tires produces far better capability than any Prius I’ve driven. Opt for some of the dealer-installed F Sport suspension bits and this hybrid might prove quite entertaining on a twisty road. Right out of the box, though, you’ll still want to exercise caution and moderation.

Given the dynamic compromises associated with the CT 200h, I’d recommend a loaded Volkswagen Golf TDI if what you want is the practicality of a hatchback and the mileage of a hybrid combined with a dose of luxury and a modicum of entertainment while driving. 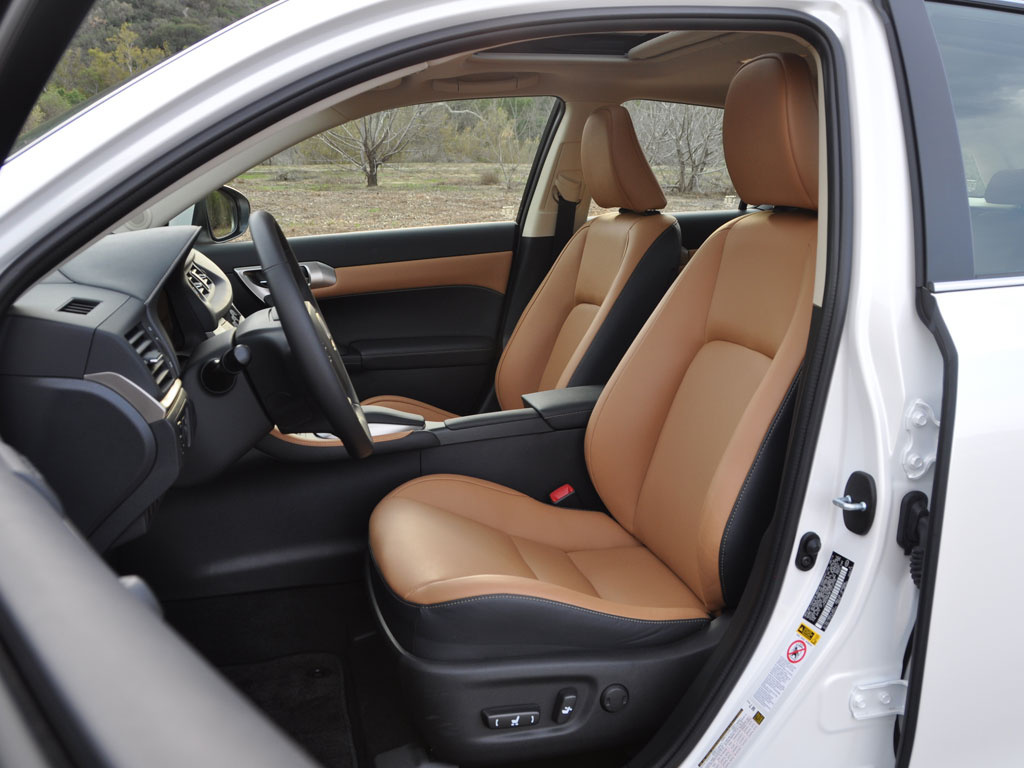 That loaded Golf TDI would also provide greater interior comfort and practicality. The Lexus CT 200h is a cramped car—up front, in back, and in terms of cargo space.

Snug, but quite comfortable, the front seats don’t supply much room for stretching out, but they do provide excellent support. The driver can find a perfect position behind the thick-rimmed steering wheel, which is comfortable to grip. Frequent rest stops for stretching your appendages are a good idea, though.

The rear seats are to be used only when necessary. With the driver’s seat set to my comfort, I squeezed in behind it and literally had to splay my legs around the front seatback in order to fit. Also, when attempting to exit, my size-12 feet got stuck in the footwell as my heel caught the raised floor just forward of the rear seat’s platform.

The trunk supplies 14.3 cubic feet of space, presumably measured to the CT 200h’s roof. For whatever reason, Lexus does not supply a cargo measurement with the rear seats folded, though that figure is reportedly 32.3 cubic feet. Neither amounts to as much as a Toyota Prius provides, underscoring the price to be paid for the CT’s more expressive styling.

At least Lexus gets the quality of the interior materials and the look and feel of the controls right. At this price point, you definitely feel like you’re getting your money’s worth.

Also, I must confess that I am a huge fan of the Lexus Remote Touch device, which helps the driver to navigate the features and menus shown on the dashboard display screen. It essentially works just like a computer mouse, providing tactile feedback to help you realize when you’ve moved the cursor over a selection. You acclimate fast, and it quickly becomes second nature.

Beyond Remote Touch, note that the CT 200h’s primary stereo and climate functions are accessed using old-school knobs and buttons. (Imagine me blowing kisses to Lexus.) This means I can leave the display set to the navigation map for checking traffic conditions or zooming in to see how far ahead my next turn might be. 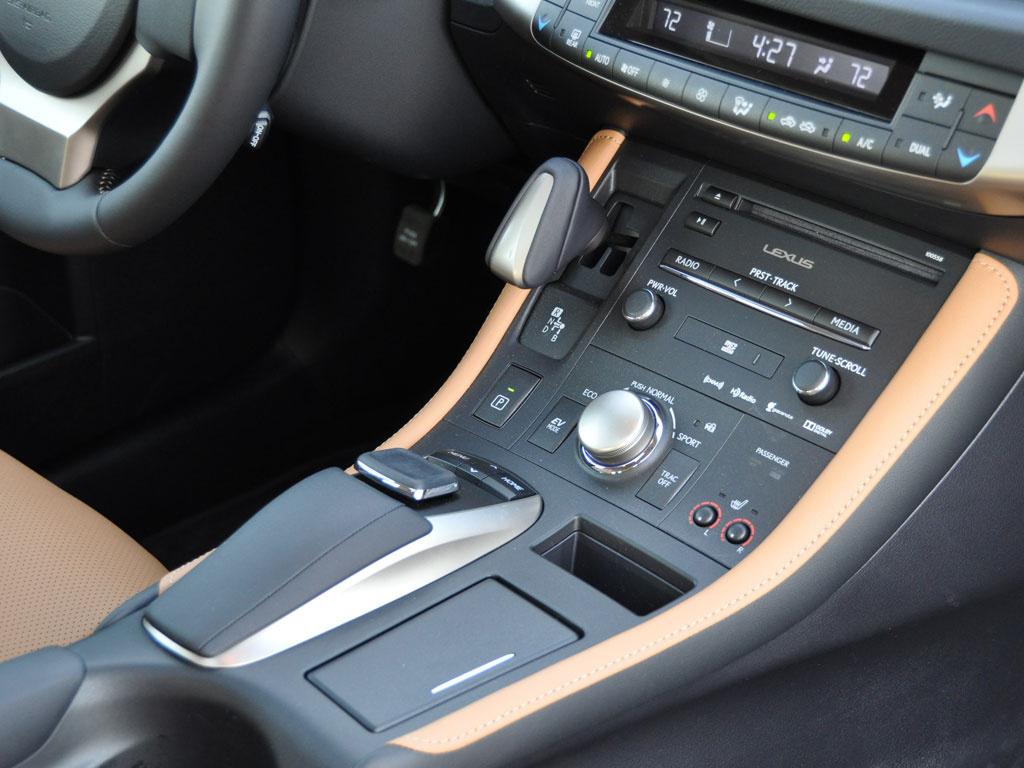 Pairing a smartphone to the CT 200h’s standard Lexus Enform infotainment system is simple. Once you’re connected, making and taking calls is a snap, and streaming music is no problem. If you’re an Apple geek, you can employ the standard Siri Eyes Free technology to make life even easier. Upgrade to the Lexus Enform App Suite system, download the mobile application to your device, and enjoy access to an expanded array of services.

The optional navigation system provides free traffic and weather reports, recognizes over 100 different voice commands, and supports English, Spanish, and French languages. It is paired with a 10-speaker premium sound system that includes HD Radio and Lexus Enform Destinations technology, which is designed to serve as a sort of 24-hour concierge.

Aside from these features, a Lexus CT 200h doesn’t offer much in the way of convenience-related technology, but you can install a handful of extra-cost safety systems on this car. 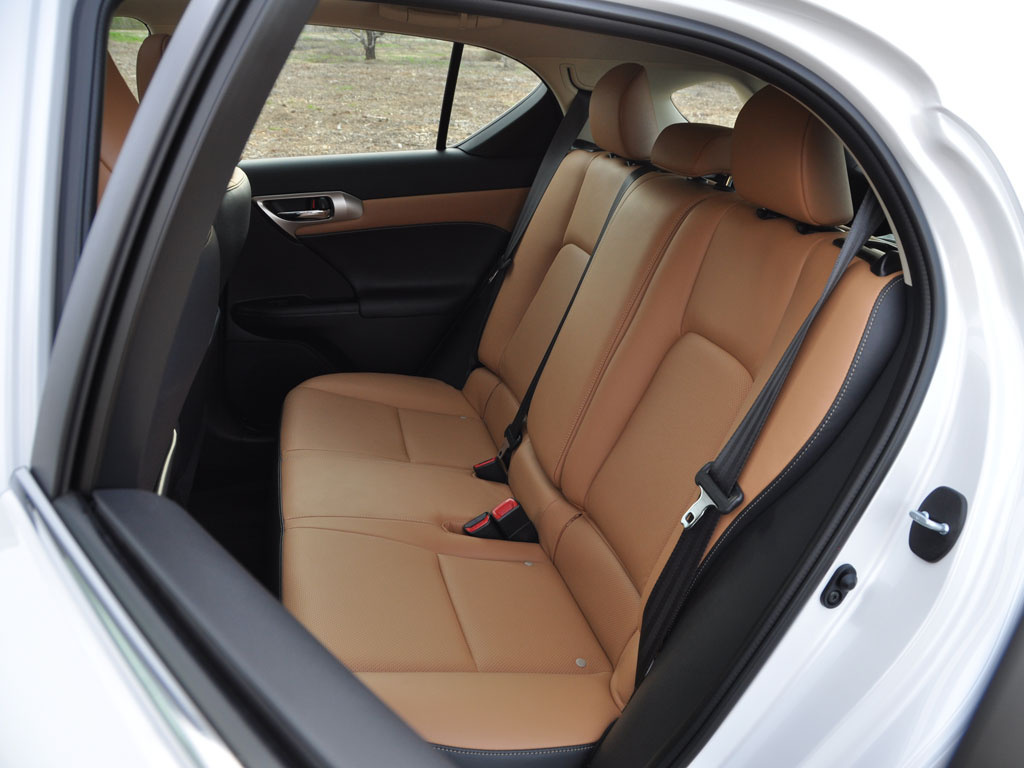 As standard equipment, Lexus Enform includes Safety Connect service and a free trial subscription for the first year of CT 200h ownership. With an active subscription, Safety Connect automatically contacts emergency authorities in the event of an airbag deployment, helping to speed rescuers to the scene of an accident.

As an option, buyers can specify a reversing camera. That’s right, a feature that is included on every Honda Fit is an option on this similarly sized Lexus—which costs twice as much money. Parking sensors, which Lexus calls an Intuitive Parking Assist system, are also optional.

Another upgrade is a dynamic radar cruise control system with pre-collision technology. If the pre-collision system determines that a crash is about to occur, it snugs the seatbelts tight against occupants and prepares the braking system for maximum response the moment the driver presses on the pedal. It does not automatically brake in such situations, though.

Don’t look for a blind-spot warning system on a Lexus CT 200h, or lane-departure warning and lane-keeping assist technologies, or a rear cross-traffic alert system. They are not available on this car, no matter how much you might have to spend. But, if you do happen to collide with something, know that the CT 200h earns a Top Safety Pick rating from the Insurance Institute for Highway Safety (IIHS). 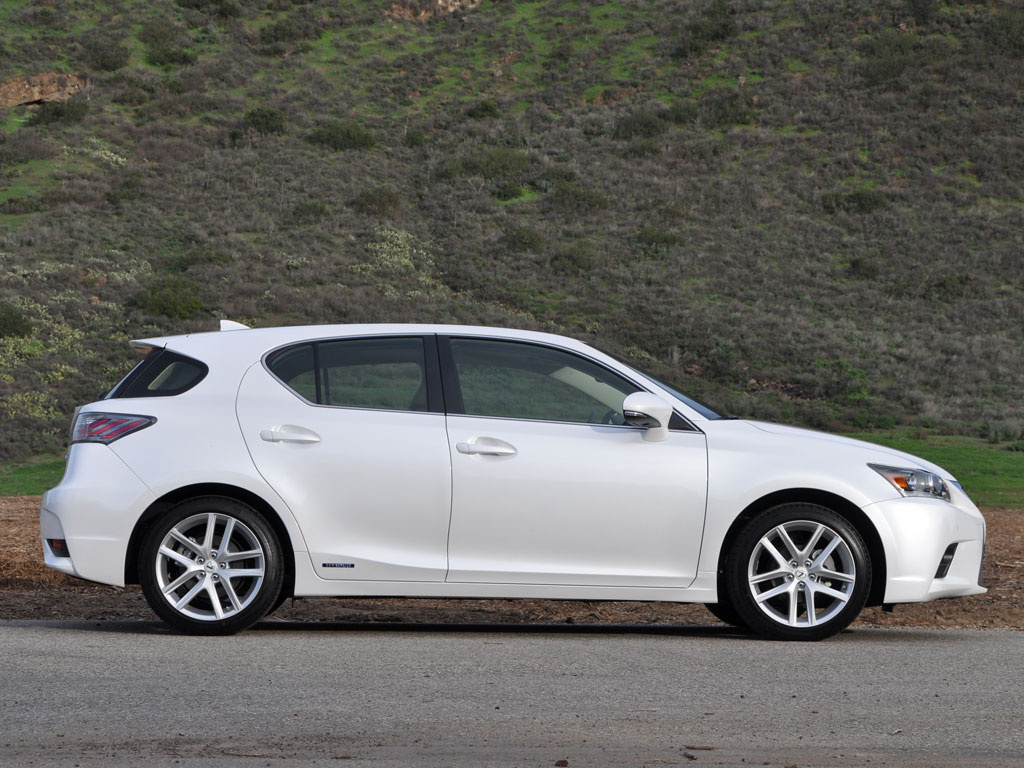 People concerned about the cost-effectiveness of a vehicle—especially a hybrid vehicle—are not going to like the Lexus CT 200h. Compared to the Prius upon which it is based, it sacrifices interior comfort, practicality, and fuel economy for style, top-quality cabin materials, and a Lexus badge. The Prius is far more cost-effective to own.

Eliminate this comparison to the vehicle with which it shares a powertrain, and the CT 200h makes more financial sense. It is the least expensive Lexus, and compared to other entry-luxury vehicles it delivers greater practicality and better fuel economy. Plus, both Consumer Reports and J.D. Power predict good things for the CT 200h in terms of reliability and dependability over time, and this car isn’t expected to cost much to own aside from the premium sticker price.

As far as its ability to hold its value over time, the CT 200h gets an average rating from ALG. Nevertheless, Lexus will lease one to you for about $300 per month plus tax, and all you need to do is come up with a grand at signing while promising to make 3 years of payments. Lexus will even make the first payment for you. You can only drive 10,000 miles per year, but at that price who wouldn’t want to drive a Lexus instead of a Prius?

Sometimes all that matters is how the monthly payment fits into a budget, and with the CT 200h Lexus seems to get that, in the process making what should be a tough sell instantly more appealing.

GuruTS3H5 The Lexus CT200H is light years better than a Volkswagen. Not even in the same class

Tanya As someone who owns the Lexus CT and the VW, I agree. The Lexus so much more advanced in every way. It really is a driving experience.

GuruVRWYN I have been very happy with my ct200h. At this point, I've had it for 4 years after extending the lease an additional year because they stopped producing the vehicle. So I am considering buying it out. The concern I do have is the trade-in value I would have 5 years from now.

Have you driven a 2015 Lexus CT Hybrid?
Rank This Car