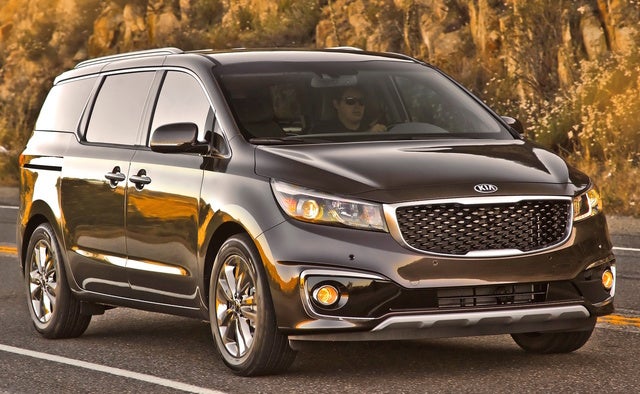 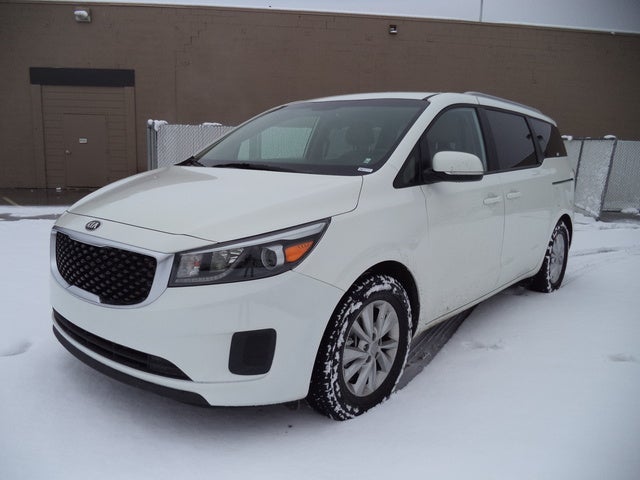 The 2014 Kia Sedona brought a few cries of “foul” from reviewers when it was re-introduced still looking unrefreshed after a one-year vacation. There was, however, a method to the Korean automaker’s madness with the debut of the totally reworked third-generation Sedona lineup in 2015. This value-laden 7-passenger minivan looks tougher, drives better and all but eliminates intrusive road and engine noise from its upgraded cabin. In a nod to the resurgent popularity of the rugged sport-ute concept, the new-look Sedona is, at least according to the media, attempting to man-up the traditional soccer-mom image of the typical minivan. In fact, Kia brands its next-gen Sedona a Multi-Purpose Vehicle (MPV) in hopes that the U.S. will catch up to the rest of the world in dropping the word “minivan” from its automotive vocabulary.

Among the changes to the Sedona are a few added trims, with the new L now serving as the entry-level version just below the now lower-midlevel LX and the up-featured (and returning) EX. Meanwhile, a sporty new SX trim and an also new top-shelf SX Limited (SX-L) finish off the Sedona stable. All are, of course, still offered with front-wheel drive (FWD), but a new electric power-steering unit graces the SX and SX-L trims which Kia claims brings a whole new level of driving panache to this MPV. Additionally, a new Drive Mode Selector in the SX and SX-L offers a choice of Normal, Comfort and Eco modes, altering steering weight and transmission shift points to suit the mood of the commute.

Also debuting is a unique second-row Slide-N-Stow feature in all but the SX-L variant. This upgraded system boasts easier folding of the second-row seatbacks to allow 142 cubic feet of total cargo capacity. The SX-L sports new reclining and sliding second-row lounge seats that boast head- and footrests. However, these seats don’t fold down, so total cargo area is considerably less (only 78.4 cubic feet) than that of its lower-echelon siblings.

Power-wise, the standard 3.3-liter V6 engine returns to the Sedona lineup for 2015 and once again pairs with the ubiquitous 6-speed shiftable automatic transmission to produce 276 hp and 248 lb-ft of torque. Mileage figures are curiously trim-dependent, with the L, LX and EX offering an EPA-estimated 18 mpg city/24 highway, the SX coming in at an impressive 18/25 and the SX-L dropping to 17/22. Towing capacity with the available tow hitch and wiring installed maxes out at 3,500 pounds.

Anyhow, look for the reworked Sedona lineup, depending on the trim selected, to tote 17- or 18-inch alloy wheels, a rear spoiler, roof rack, heated power-folding and power-adjustable mirrors, and manual- or power-sliding rear passenger doors aboard its newly athletic profile.

Options in lower-level Sedona editions include a number of add-ons that come standard in higher trims. Meanwhile, optional stuff like GPS navigation (Garmin Nuvi), power sunroofs in the front and rear, rear-seat DVD entertainment and remote engine start are slated only for the SX-L.

GeneCanada I've tested 2015 Sedona today. Everything what I thought about during the test drive I found later in the net mentioned by other folks. I wouldn't talk about the number or cup holders or iPad interfaces. I'm a driver and test cars based on their technical performance, not based on number of cup holders. The first thing I should mention: the van is smaller inside than its competitors on the market. Volume data for Toyota, Honda and Dodge/Chrysler confirm this feeling. The previous generation Sedona was larger. Engine/Transmission: You really need to push the gas pedal down into the floor to have the van to accelerate. There is a "hole" in the beginning, then the van starts to move fast. You only have a good acceleration when the RPM is around 4K or after. I couldn't find a torque graph in the internet to confirm that feeling, but I should mention that I expected something better for a 2-3 year old engine. Unlike most competitors, Sedona's gear switch is located in the "normal" place, where you can really use a tiptronic/shiftronic feature. You really can't do it on Dodge. It's just not handy there even if you pay for this feature. Having a 6-speed gear on new Kia is also not considered a "rocket technology" in the auto industry. The van came in late 2014, so they could do a 7 or 8 speed. As a result the advertised fuel mileage is average (17/25 mpg), nothing fancy here. I was surprised to learn that Honda has 19/28 mpg. When I started to read details, I've learned that in the slow speed Odyssey shots down 1 to 3 cylinders. That helps and Kia unfortunately doesn't have this option. Finally, when it comes to the price you can lease a Caravan (not my first choice technology wise) in Canada for 24 months with 20K km/year for 215 CAD monthly TAX IN. While Kia offers to lease Sedona for minimum 36 months with 20K km/year for 245 PLUS TAX by-weekly. Even as it has a better basic package, I think Sedona is seriously overpriced. Looking at their parent company Hyundai, those guys have much better price policy that really helps them to sell very well.

Have you driven a 2015 Kia Sedona?
Rank This Car

I recently had a problem with my 2015 Kia Sedona. Twice in the space of an hour my brakes failed. I was going at low speed. There was snow around but no ice on the road. Suddenly there was a loud ...

My Kia Sedona Is Fluctuating From Cool To Hot Back To Cool A Few Times Whi...

How Can I Set The Media Sound To Turn Off When I Turn The Engine Off?

The Pull Handle On My 2015 Stow And Go Seat Will Not Release.

The pull handle for the 3rd row seat to stow will not pull. The handle pulls but no release.