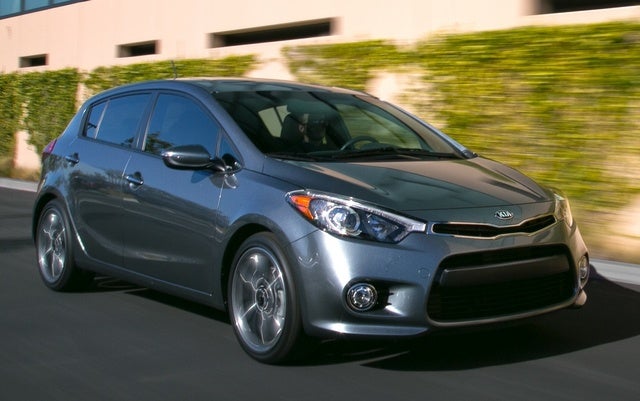 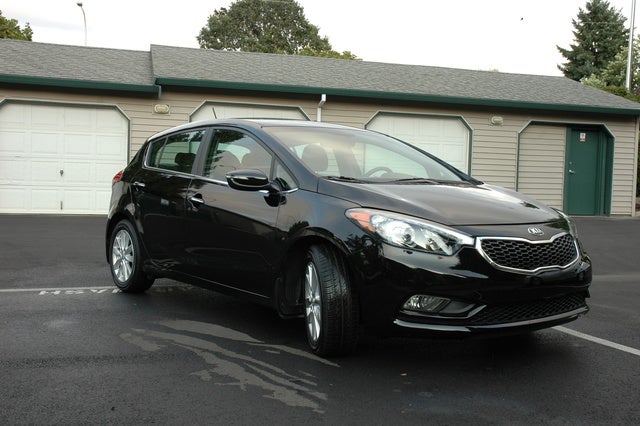 Need a capable and inexpensive hatchback for those trips to the mall or toting presentation materials to the office? Check out the 2015 Kia Forte5, aka the Forte 5-Door. This 5-seat Forte compact people hauler joined its sedan and coupe stablemates in enjoying a hefty redesign for the 2014 model year and now sports a more aggressive profile, a roomier cabin and some added cargo space. And speaking of cargo space, for 2015 Kia touts some 23.2 cubic feet behind the second row of seats in its Forte5, but standard split-folding rear seatbacks doubtless add a hefty slab of additional toting space, even though Kia, either curiously neglectful or cagily close-mouthed, won’t say how much extra. This heady hatchback, by the way, gained 0.4-inch of added overall length in the 2014 overhaul, thus adding even more interior room than previous generations. Curious (or cagey) indeed!

In any case, the 2015 Forte5 comes in a pair of trims, the base EX and the turbocharged SX, with both trims remaining available only with front-wheel drive (FWD). And for 2015, the big news, Forte-wise, is that all manifestations of this cool-ish commuter car that already graces dealer showrooms will actually cost less than they did in 2014. Amazing but true!

Powertrains, meantime, remain the same as in 2014, with the 2.0-liter inline 4-cylinder (I4) normally aspirated engine again standard in the EX and a turbocharged 1.6-liter I4 mill giving the SX its go.

The base I4 in the EX mates only with a 6-speed shiftable automatic transmission to put out 173 hp and 154 lb-ft of torque, with mileage running 25 mpg city/33 highway.

Before you begin to ask fretfully about what features have been deleted as a result of this vehicle's aforementioned lower price tag, the answer is: none! The 2015 Forte5 EX remains offering 16-inch alloy wheels, a rear spoiler and heated power-adjustable mirrors standard outside, with premium cloth upholstery, full power accessories and a power-adjustable driver’s seat again delivered standard inside. Cruise control and telescoping tilt-wheel steering also adorn the base EX, as do air conditioning, a cooled storage compartment and Bluetooth hands-free calling, while entertainment is provided by a single-CD player flaunting 6 speakers, satellite radio and a USB port.

As is traditional, a number of the standard features aboard the SX can still be delivered on the EX as options, while a power sunroof, a navigation system, an auto-dimming rear-view mirror with remote garage door opener, dual-zone auto climate control, heated front and rear seats, a heated steering wheel and memory for driver's settings are available to both trims. Further options set for each of the 2015 Forte5 iterations include leather-trimmed upholstery, a 4.2-inch vehicle information display and an auto-dimming rear-view mirror.

Users ranked 2015 Kia Forte5 against other cars which they drove/owned. Each ranking was based on 9 categories. Here is the summary of top rankings.

right front boot needs to be repaired. how is this done?