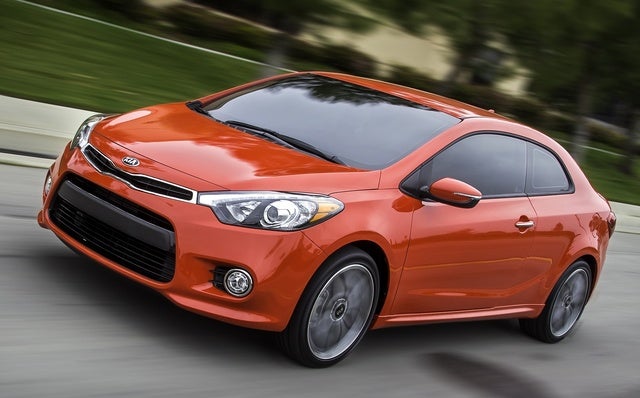 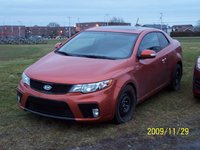 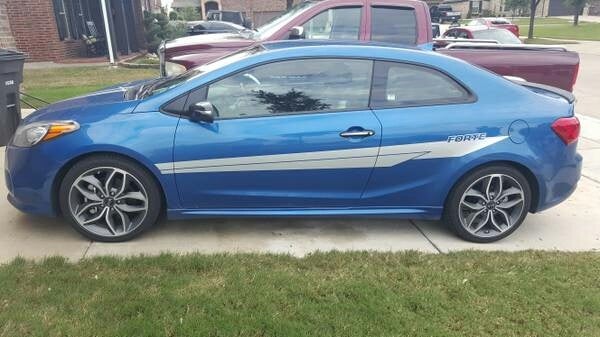 In its never-ending quest to distinguish itself from the rest of the pack, Kia has labeled its sporty 2-door Euro-styled Forte the Forte Koup. Redesigned in 2014, the coupe/Koup joins its sedan and hatchback iterations in offering only one notable change for the 2015 model year. That change, believe it or not, is a slight—a very slight, but nonetheless appreciated—drop in MSRP. Of course, this is an effort on Kia’s part to establish the latest Forte trio as the lowest-priced vehicles in their market segment.

But don’t worry, all the sportiness and agility are still there in the 2015 Koup trims, as are the upgraded bells and whistles, winsome looks and peppy powerplants. Again coming in entry-level EX and turbocharged SX iterations, the Forte Koup remains toting only a front-wheel-drive (FWD) configuration, but it boasts a significant stretching and widening of the frame in that 2014 redo that results in even more passenger room, especially for rear-seat denizens, along with some 13.3 cubic feet of trunk space. No, it doesn't have as much hauling area as its sedan and hatchback cohorts, but it’s better than the previous generation’s 12.6 cubic feet.

Power-wise, look for the base Koup EX to tote the traditional 2.0-liter normally aspirated inline 4-cylinder (I4) engine of yore. Mated with either the standard 6-speed manual transmission or the available 6-speed shiftable automatic transmission, this pint-size powerplant puts out a decent 173 hp and 154 lb-ft of torque. Mileage numbers, meantime, remain 24 mpg city/33 highway in stick-shift versions, while automatic-packing iterations boast 25/34.

For more oomph over the asphalt, look for the Koup SX to flaunt a 201-hp turbocharged I4 that combines with either the delivered 6-speed manual or the optional 6-speed shiftable automatic to pound out 195 lb-ft of torque. Mileage numbers in the stick-shift variant remain 22/29, with the automatic-toting version again estimated at 22/30. Oh, and both drivetrains boasting the available automatic transmission sport steering-wheel-mounted paddle shifters.

Standard appearance bling and creature comforts in the EX for 2015 continue to impress, with 16-inch alloy wheels and heated power-adjustable mirrors outside and premium cloth upholstery, keyless power door locks and power windows gracing the inside. Further upscale appointments in this base trim include cruise control and telescoping tilt-wheel steering, a leather-wrapped steering wheel and air conditioning, along with the cooled storage bin introduced in 2014. Entertainment, meantime, still consists of a single-CD player with 6 speakers, as well as satellite radio and a USB connection, while standard Bluetooth hands-free calling also returns.

Options for both iterations of the next-gen 2015 Forte Koup include a power sunroof, a navigation system, heated front and rear seats (with power-adjustable driver’s seat), memory for driver's settings and a 4.2-inch vehicle information display. Further options for both trims include dual-zone auto climate control, an auto-dimming rear-view mirror with integrated remote garage door opener, a heated steering wheel, ventilated front seats and leather-trimmed upholstery. Alas, adding any of the above extras to this competent coupe means kissing Kia’s meager-but-nonetheless-appreciated price cut goodbye

Have you driven a 2015 Kia Forte Koup?
Rank This Car

2015 Kia Forte Koup 84K miles. At stop lights and backing up it seems like my car is making a whirring or purring noise. Like fighting for its life, It’s almost like my car wants to die. Or when I’...