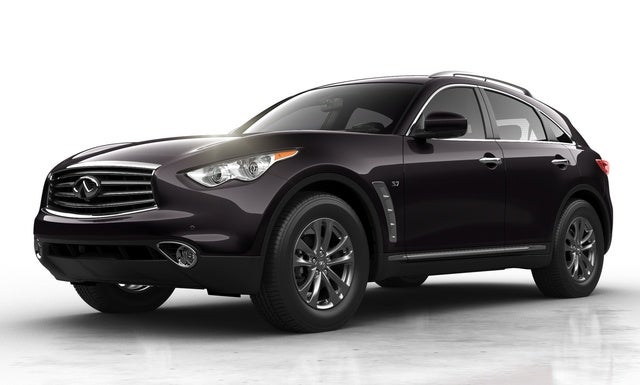 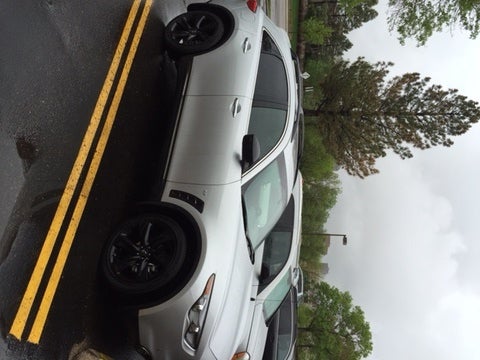 Want a little more driving panache out of your luxury midsize crossover ute? Check out Infiniti’s 2015 QX70. Yeah, this 5-seat palace of posh drops its V8-toting 5.0 trim for the 2015 model year, leaving the 3.7 and 3.7 AWD designations to go it alone, but all is not doom and gloom, with an optional Sport Package flaunting unique wheels, adaptive lighting and heated/ventilated front sport seats slated to be offered for this year’s abbreviated lineup.

Prior to the 2014 model year, this quasi-ute was called the FX. Then along came Nissan/Infiniti's Q-based corporate nomenclature revision edicts and, presto, the FX is now the QX70. But it still rides on a modified Nissan 370Z platform and will continue to bedazzle carpoolers and mall-hoppers alike with its uber-sporty driving dynamics. The curvy sheetmetal and raffish roofline distinguish this heady people-pleaser from its numerous rivals, but with this sexiness comes the inevitable downside of cramped rear seating and a mere 62 cubic feet of cargo area with the rear seatbacks folded down. Those desiring a bit more elbow room and carrying capacity might want to check out Beemer’s less driver-delighting X6 or Acura’s elegant but schlepping-stooped MDX.

In any case, virtually every reviewer on the planet assures us that just because there’s no longer a V8 powerplant in this still-potent SUV-wannabe, this princely Infiniti still offers one of the most ego-grabbing drives in its class. The peppy 3.7-liter V6 that now stands as the sole QX70 engine offering is again mated with the capable 7-speed shiftable automatic transmission to throw down a respectable 325 hp and 267 lb-ft of torque. And mileage estimates, though not overly impressive at 17 mpg city/24 highway in the standard rear-wheel-drive (RWD) base 3.7 trim and 16/22 in the available all-wheel-drive 3.7 AWD, still beat the deleted V8’s woeful 14/20. Oh, and the AWD system is of the intelligent variety, whereby 100% of power is sent to the rear wheels for normal cruising, with up to 50% of torque automatically diverted to the front wheels on snow-slick roadways.

Despite its new moniker, the 2015 QX70 is dedicated to retaining all the standard plush of its legendary FX progenitor. Starting with 18-inch alloy wheels and a rear spoiler, this handsome hackney also sports such added appearance attributes as a power rear liftgate and a power sunroof. Inside, plush leather upholstery awaits, as do heated, power-adjustable front seats. Reclining rear seats are also expected back for 2015, as are full power accessories, including heated power-adjustable outside mirrors.

Cruise control and telescoping tilt-wheel steering doubtless return for the pared-down QX70 lineup, along with such staples as a remote garage door opener, a rear-view camera and dual-zone climate control. Alloy and leather cabin accents, meantime, should remain to give this curvaceous crossover some over-the-top ambiance, while a 300-watt Bose premium audio system entertains with 11 speakers, satellite radio and auxiliary iPod integration. Unfortunately, media folks once again warn of an overabundance of buttons and switches in the 2015 edition of this high-end hauler.

Users ranked 2015 INFINITI QX70 against other cars which they drove/owned. Each ranking was based on 9 categories. Here is the summary of top rankings.

Car kind of shakes when brakes are applied. New rotors and brakes ?

There Was A Car That Sold Recently On Here. Is There Anyway To Go Back And ...

It was from Tim Short out of Chattanooga, TN- white Infinity around $27,000.