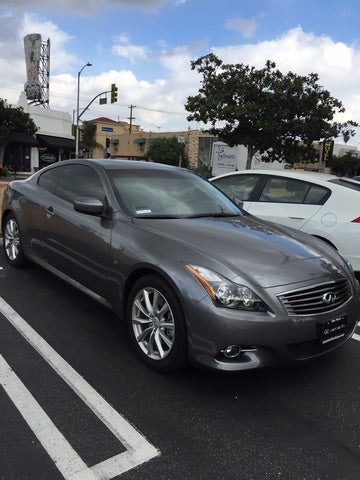 Before the 2014 model year, Infiniti offered a snazzy compact coupe and convertible called the G37. After a highly touted rebranding effort begun in 2014, this same 4-passenger luxury performance car, still offered in coupe and drop-top form, is known for 2015 as the Q60. Furthermore, a significant change has occurred in this classy commuter scooter from last year in that a new Q60 Sport (aka the Q60S) Limited trim replaces the high-performance IPL coupe sub-trims, though the IPL soldiers on in convertible form only (and is covered separately). Thus, for 2015, the Q60 Coupe comes in Journey, Base AWD, Sport, Sport 6MT, Sport Limited 6MT, and Sport Limited trims, with the Q60 Convertible returning in Base and Sport 6MT iterations. As may be obvious, all but the Base AWD trim are delivered with standard rear-wheel drive (RWD), while said AWD trim carries a standard intelligent all-wheel-drive configuration.

Meanwhile, the 2015 Q60S 6MT is so labeled for the simple reason that its standard 3.7-liter V6 powerplant remains available with a 6-speed manual transmission. Non-6MT versions come with a 7-speed shiftable automatic transmission. Look for 330 hp and 270 lb-ft of torque from this peppy 6-cylinder boasting either transmission, with the automatic-equipped Base AWD variant also adding a selectable Snow mode to the drivetrain package. Be advised, however, that a number of reviewers suggest mounting a set of good snow tires for best traction results. Finally, look for 19 mpg city/27 highway from the automatic-toting RWD Journey coupe, 18/25 from the AWD Base coupe, and 17/25 from the RWD stick-shift (6MT) coupe variants. EPA estimates for the Q60 convertible return at 17/25 in automatic garb and 16/24 with the stick-shift-equipped trim.

Techno-goodies in the lower trims include Bluetooth hands-free calling and a 6-CD changer complemented by 6 speakers, satellite radio, and an auxiliary audio input (USB).

The 2015 Q60 Convertible iterations are equipped similarly to their 2-door counterparts, with the major difference being the drop-top's 3-section power-opening hardtop roof.

Alas, trunk space in each Q60 offering is limited to say the least. Coupe versions offer a mere 7.4 cubic feet of toting area across the board, while the convertible boasts 11.8 cubes with the top up and a mere 2.5 cubic feet with the top down. Obviously, with the aforementioned downsized rear seats, drop-top Q60 variations handle only 2 passengers comfortably with the top up, as the rear seats are good only for some marginally extra storage space. Perhaps this is one further reason why the consensus among reviewers seems to be that this once-popular offering, with its dated though still attractive styling, harsh ride, and noisy cabin may either become more Q50-like or get dropped entirely.

Users ranked 2015 INFINITI Q60 against other cars which they drove/owned. Each ranking was based on 9 categories. Here is the summary of top rankings.

HELLO I AM APPROVED AND FOUND THE CAR I WANT TO PURCHASE. HOW DO I BEGIN THE PROCESS