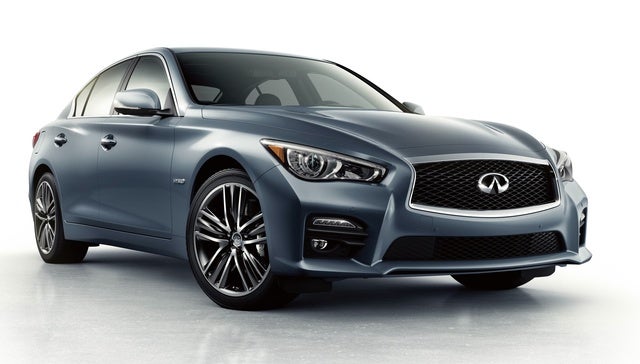 Introduced for the 2014 model year, Infiniti’s 2015 Q50 Hybrid midsize luxury sport sedan is a competent but far from overwhelming gas/electric complement to its gasoline-only Q50 siblings. The Q50 concept, loosely based on the G37 coupe and convertible (now called the Q60) debuted after the Japanese automaker had begun yet another rebranding program, thus this 5-seat posh-mobile, in sedan form, stands as a separate and distinct model.

The 2015 Q50 Hybrid returns in 2 trims: the Premium and the Sport (Q50S Hybrid in Infiniti-land). Both are delivered with standard rear-wheel drive (RWD), but each remains available with intelligent all-wheel drive (iAWD) that allows cruising in RWD on dry pavement while standing ready to divert up to 50% of torque to the front wheels when things get slippery.

Although stylish and peppy, the hybrid iteration of this snappy 4-door lacks, according to numerous reviews, the smooth acceleration and the confident braking of its gasoline-only sibling. Additionally, nearly all reviewers complain that Infiniti’s Direct Adaptive Steering system, delivered in each of the hybrid trims, comes laden with electronic power steering that effectively eliminates any sort of road feel and feedback. Not only that, but this high-end hybrid, though roomy enough inside, sports a mere 9.4 cubic feet of trunk space due to the lithium-ion battery pack stashed beneath.

Power-wise, look for the 2015 Q50 Hybrid pair to tote a 3.5-liter V6 gasoline engine mated with a 50kw electric motor. Under the management of the standard 7-speed shiftable automatic transmission, this drivetrain puts out a total of 360 hp, with the gas engine boasting 258 lb-ft of torque and the electric motor capable of 214 lb-ft of torque. This drivetrain also features hill-start assist and a driver-selectable 4-mode system offering Standard, Sport, Snow and Eco settings to enhance the commute. EPA-estimated mileage, meanwhile, remains 29 mpg city/36 highway in RWD trims and 28/35 in AWD editions. Again, regenerative braking helps replenish the battery pack, but as mentioned, it isn’t the most confidence-inspiring system out there. A 5.3-second 0-60 time, however, might let you blow some doors off at green lights.

Finally, a Technology Package is also optional for the 2015 Q50 Hybrid and includes such safety features as front and rear collision intervention, blind-spot monitoring, lane-departure warnings and adaptive cruise control, as well as a reactive gas pedal for more fuel-efficient cruising.

GuruDQFZ5 RWD models have had 0-60 times quoted between 4.64-4.9. You guys should do a bit more research and check your numbers!!

Users ranked 2015 INFINITI Q50 Hybrid against other cars which they drove/owned. Each ranking was based on 9 categories. Here is the summary of top rankings.

Have you driven a 2015 INFINITI Q50 Hybrid?
Rank This Car