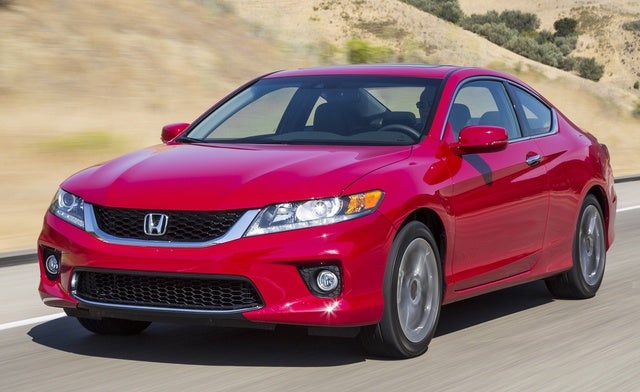 CarGurus has 1,587 nationwide Accord Coupe listings starting at $2,100. 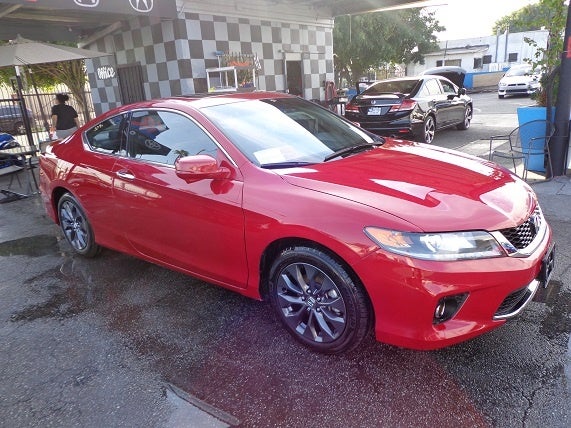 Refreshingly uncomplicated, handsome, powerful enough for America’s most deserted highways and engagingly nimble, the midsize 2015 Honda Accord Coupe does everything its sedan sibling does, only with a bit more élan. Returning to boast 5-passenger capacity and room for 15.8 cubic feet of luggage, groceries or knick-knacks in the trunk, the upcoming year’s Accord Coupe lineup also stands pat with the base LX-S, the next-up EX and the tolerably posh EX-L. This latter trim, by the way, can also be divided into EX-L V6 and EX-L V6 with Navigation sub-trims.

After a comprehensive reworking for the 2014 model year, the 2015 version offers no significant changes save a minor shuffling of standard features among trims. Expect, therefore, the return of the roomy quasi-plush interior, the adept handling characteristics and the choice of two engines. Oh, and look once again for the Accord Coupe to boast a more dynamic profile than its 4-door stablemate with a sleeker rear end and an edgier look to the side sheet-metal.

Powering the base LX-S, the midlevel EX and the high-end EX-L is a standard 2.4-liter inline 4-cylinder (I4) engine that again comes under the management of the traditional 6-speed manual transmission that’s standard in the LX-S and ES trims. Meantime, a continuously variable transmission (CVT) remains delivered with the I4-toting EX-L and its EX-L with Navigation kinsman, while lower trims remain eligible to get the CVT as optional equipment. With either transmission, expect 185 hp and 181 lb-ft of torque to the tune of 24 mpg city/34 highway in stick-shift trims and 26/35 in CVT-toting editions.

Appearance goodies are once again expected to include, depending on trim selection, 17- or 18-inch alloy wheels and heated power-adjustable mirrors, with cabin adornments on all trims to again include standard cloth or leather upholstery, full power accessories, cruise control and telescoping tilt-wheel steering. Curiously, the 2015 Accord Coupe still offers a fold-down rear seatback, but it’s not of the split-folding variety favored by most rivals.

Anyhow, a rear-view camera again comes standard in all 2015 Accord Coupe iterations, as does Bluetooth hands-free calling and audio streaming, with the LX-S and EX both sporting a single-CD player, 6 speakers, a USB port and controls for Pandora internet radio. Further, the EX and higher trims additionally feature a standard power moonroof, power-adjustable driver’s seat and blind-spot warnings. Moreover, the EX-L adds memory for driver’s settings, an upgraded rear-view camera, premium 7-speaker sound system with satellite radio and HondaLink (with Aha) Smartphone apps. Obviously, the EX-L with Navigation throws GPS navigation with voice-recognition technology into the standard EX-L configuration of cabin confections.

Of course, the standard safety equipment aboard the 2015 Accord Coupe lineup mirrors the preceding year’s editions, with 4-wheel antilock brakes (ABS), traction and stability control, front side-mounted airbags, and front and rear head airbags all standard. Daytime running lights and a remote antitheft alarm, by the way, also return as standard safety stuff on this midsize 2-door for the upcoming year.

What's your take on the 2015 Honda Accord Coupe?

Users ranked 2015 Honda Accord Coupe against other cars which they drove/owned. Each ranking was based on 9 categories. Here is the summary of top rankings.

Have you driven a 2015 Honda Accord Coupe?
Rank This Car

Cars compared to 2015 Honda Accord Coupe

CarGurus has 1,587 nationwide Accord Coupe listings starting at $2,100.

How Much To Repaint?

How much to get it painted? It’s pitted by bleach from construction company. Just trying to get round about numbers. Hood, front panel, front bumper, side of car

My car has 117k miles and I’ve never did a transmission flush. I’ve heard once you’re car goes over certain amount of miles you’re not supposed to change the fluid. So my question is it safe to do...

Have There Been Reports About The 2015 Honda Accord Coupes, Where The Heate...

I'm trying to find a 2015 single cat back exhaust system for my Honda accord coupe ex 2.4l 4 cylinder

2015 Honda Accord Coupe Trims For Sale