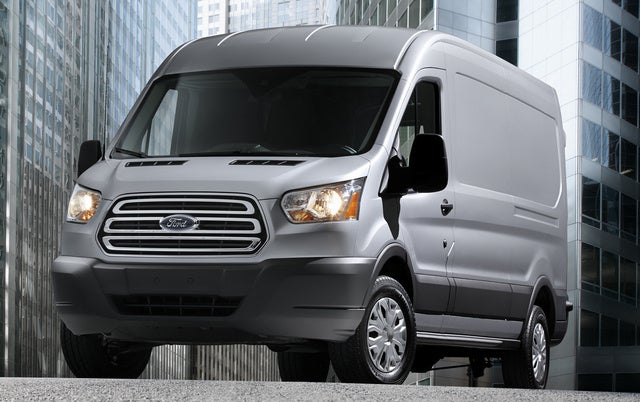 Average user score
4.4 ⁄ 5 stars
Based on 6 reviews
Review by Guru7X98M — I like my ford transit , it drives great, has plenty of room and is very comfortable. Read more
Review by Lee — The vehicle is really great except for a few points to watch out for. First the high vs medium makes a big difference. Low or standard is out of scope for most - hunching over to walk is a deal-break... Read more
Review by GuruGTH7S — Over all I was looking for a decent priced vehicle to convert into a camper van. The Ford Transit is a great reasonable cargo van to do this. However it had some electrical problems that I had to have... Read more 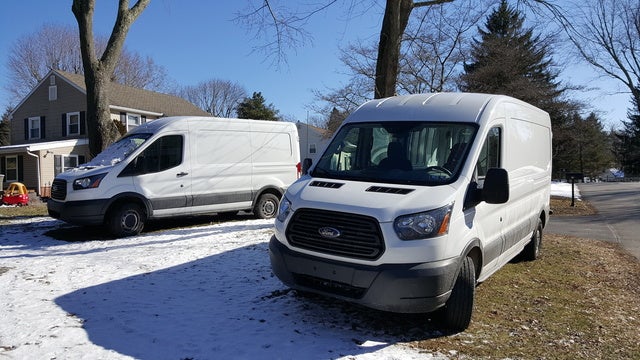 Replacing a platform that remained largely unchanged since 1965, Ford adds the Transit Cargo over on this side of the pond to replace the company's long-lived but quite dated E-Series Econoline cargo van. Although a unibody structure, solid axles, struts and leaf springs may not be ground-breaking technology overall, these are nevertheless vast changes from the former E-Series vans. It's not a re-do in the slightest, but a truly all-new model, at least to us.

In all, maximum payload should increase by 300 pounds, fuel economy should improve by 25%, and creature comforts improve by leaps and bounds over the outgoing E-Series. The end result is yet another best choice for cargo out of Ford—only the Mercedes-Benz Sprinter comes close to all the Transit's possibilities, and it doesn't offer as much power or as many fuel options.

The engine lineup is very different as well, but also fairly familiar. Most familiar is the 3.6-liter EcoBoost V6, which is the very same 320-hp and 400-lb-ft/torque workhorse in Ford's F-150. The base engine is a 3.7-liter V6 Flex Fuel engine good for about 266 hp that can be converted to use compressed natural gas or liquid propane. Least familiar is the European carryover turbodiesel, dubbed Power Stroke for the States, estimated at about 346 lb-ft of torque.

Either way, you'll get 6 automatic gears, rear-wheel drive and something like 13 mpg city/17 highway. Exact tow capacities haven't been released yet, but Ford recommends the EcoBoost and a Class IV hitch for maximum capabilities. Regarding payload capacity, this year's Transit Cargo is supposed to handle 300 pounds more than the E-Series, so it's safe to expect nothing better than 4,350 pounds in a standard-length Transit.

Speaking of which, this Transit will be offered in 2 wheelbases, 3 body lengths and 3 roof heights. Cargo capacity ranges from 256 cubic feet to 550 between the 56-inch "low roof," 72-inch "medium" and 81-inch "high roof" configurations, allowing folks in the 5-foot range to stand upright in the medium and even 6-foot-5-inch folks to stand in the high roof. Getting the high roof also requires taking the long 147.6-inch wheelbase and extended-length 266.1-inch body, but that's also the only way to get dual rear wheels.

Additional body styles include wagon, chassis cab and cutaway variants on top of the expected conversions for shelving and all your specialized cargo needs. If the 270-degree rear cargo doors don't provide quite enough access, this Transit doesn't limit any of the previous options for side sliders and the like, but there's no word yet on any crew seating arrangements.

What's your take on the 2015 Ford Transit Cargo?

Users ranked 2015 Ford Transit Cargo against other cars which they drove/owned. Each ranking was based on 9 categories. Here is the summary of top rankings.

Have you driven a 2015 Ford Transit Cargo?
Rank This Car

Is It Possible To Get A Carfax Report From A Private Buyer ?

I have written a description of a used commercial cargo van that I would like to post as a "wanted to buy" description. Can that be done?

Time Line For A Sale

How long does it take for car gurus to process all sale paperwork, once an offer is made, if I have a lien

I Found A Vehicle In Another State..how Do I Purchase And Know Its Legit An...