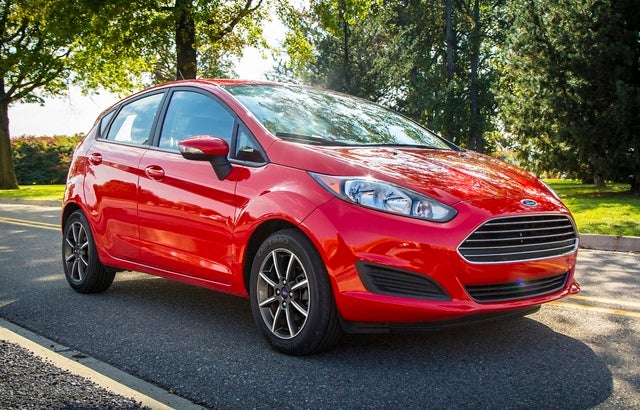 The 2015 Ford Fiesta can be optioned up for luxury or sportiness and has some tricks up its sleeve. The Fiesta manages to stand out by being different, but it’s not always the right combination. 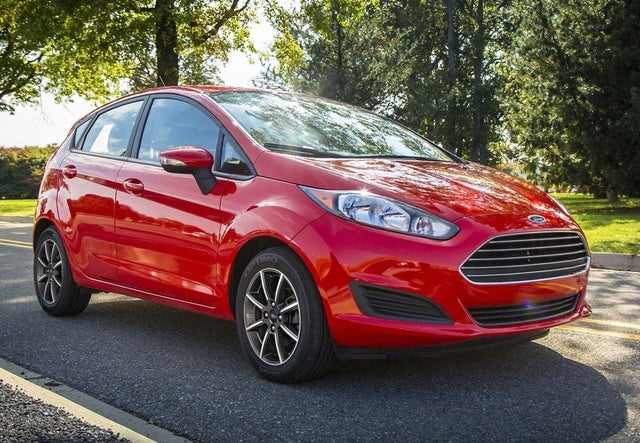 The 2015 Ford Fiesta is just a year into a styling nip and tuck that gave the compact hatchback and sedan a trapezoidal grille and revised rear fascia, plus the arrival of an EcoBoost model. The Fiesta came to the U.S. for 2010, plucked from the global Ford lineup. The swept-back headlamps and cleanly creased bodysides are finally starting to fit in with the rest of the U.S. Ford lineup as other models get restyled with a new worldwide focus. 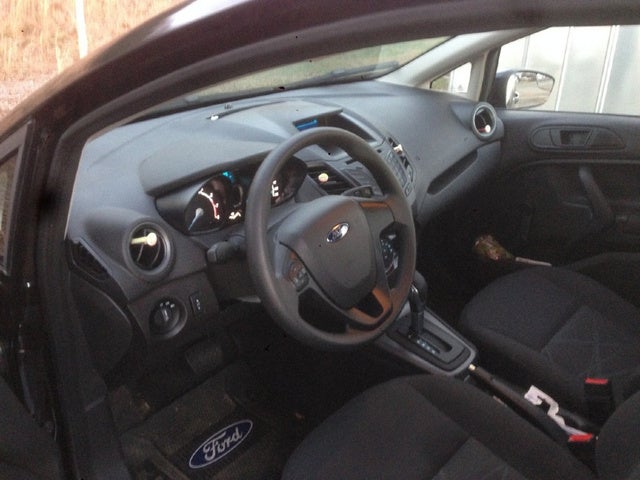 In the Fiesta’s subcompact class, form follows function, though the hatchback I tried is both less awkward and more functional than its sedan sibling. Fitting 4 doors and a nose that measures up to worldwide pedestrian-impact standards to a tight wheelbase have largely shaped the Fiesta. Prices for the Fiesta range from an MSRP of $13,965 for a sedan to $20,945 for the fairly rowdy Fiesta ST that’s overtly sporty.

Fiesta trim levels start with the basic S and move up through the SE, Titanium, and the exciting ST, which is hatchback-only. Other trims are available in both sedan and 5-door configuration, though the hatch is consistently priced higher. 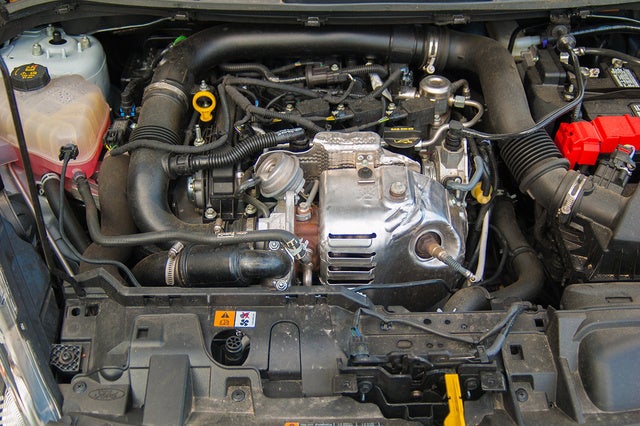 The Fiesta offers a pair of engines, a standard 1.6-liter Ti-VCT 4-cylinder with 120 hp and 112 lb-ft of torque, and the surprising 1.0-liter 3-cylinder EcoBoost that’s available in SE models with 123 hp and 125 lb-ft of torque. Transmission is a standard 5-speed manual or 6-speed PowerShift dual-clutch automatic. The EcoBoost models are manual-only, and the Fiesta ST powertrain is a turbocharged version of the 1.6-liter 4-cylinder that generates 197 hp and 202 lb-ft of torque and is paired with a 6-speed manual transmission.

The Fiesta I drove was an SE with the EcoBoost 3-cylinder. Even without being an ST trim, the handling is confident, with a direct feel and well-controlled ride. It’s often hard to tune a light, small car to soak up bumps with the grace of a heavier, less-efficient vehicle, but the Fiesta feels tremendously stout. In the past, a 3-cylinder engine was the domain of tractors and power equipment, and the few cars that dared run a triple weren’t always taken seriously. Boy, have times changed.

The Fiesta EcoBoost elevates the game of the 3-cylinder. It’s smooth and quiet to the point that you’d never guess there was anything unusual under the hood. In fact, this 1.0-liter EcoBoost engine has been honored with the International Engine of the Year award, and it’s the biggest surprise here.

The 1.0-liter EcoBoost is well-balanced, but it’s not because of a typical balance shaft that would rob both power and efficiency. Ford’s approach sounds improbable: The flywheel and crankshaft pulley are effectively counterweights, and engineers have managed the rest of the vibration with engine mounts that have been carefully tuned and placed. From an engine that’s more than a half-liter smaller than the 1.6-liter 4-cylinder other Fiesta models carry, you get 123 hp and 125 lb-ft of torque—that’s a 3-hp advantage over the 4-cylinder’s 120 hp, and noticeably more torque than the four's 112 lb-ft.

The numbers that look good on paper are even better in practice. Out on the street, the torque comes on early, peaking at just 2,500 rpm, and sticks around. The power delivery is reminiscent of a small turbodiesel, and if this is what we have to put up with for reduced emissions and EPA-estimated fuel economy of 31 mpg city/43 highway, the future looks bright. The power level is satisfying, no matter how big or small the engine actually is, and when the engine is on boost, which is often, the powertrain is responsive. There is some turbo lag, which will probably be noticeable, because the EcoBoost engine is available only with a 5-speed manual transmission.

At first, that sounds like a plus, especially for an enthusiast. Tiny turbo engine, the freedom to shift your own gears, and a solid little chassis—what could go wrong? The Fiesta’s shift linkage, for one. It’s a sloppy, vague shifter that feels cheap and reminded me of something 25 years old with a lot of miles on it. Once you get the hang of finding the gears, it’s better, and the clutch is light and fairly linear, but it felt like I was shifting a city bus at first. The transmission is loud, too. It’s been a long time since I have heard a manual gearbox “sing” like the one in the Fiesta. Every manual-transmission Fiesta does it, but it’s another aspect of the powertrain that chips away at an otherwise stellar small-car experience.

I didn’t expect the Fiesta to be Rolls-Royce quiet, but with the transmission and tire noise added to the normal racket of driving and the occasional snarl from the engine, there’s a lot of auditory stimulation. 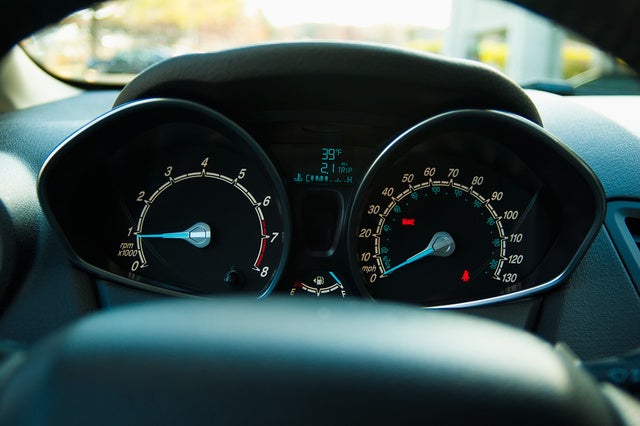 It’s actually refreshing to get into a car with an cabin as honest and straightforward as the Fiesta's. There’s not a whole lot of room inside for giant screens or huge center consoles. In some ways, that’s great, such as the ventilation controls that are easy to figure out and use. In other areas, though, it hurts. There’s too much design going on with the array of buttons for the audio system and phone, and the tiny standard LCD screen perched atop the dashboard is less than elegant.

The seats are comfortable for someone of average height, but they’re economy-car grade, which means there’s only so much padding and support. The cloth material that covered the seats in my test car seemed durable enough, but the backrest adjustment could use about twice the detents. The ideal position inevitably winds up being in between two settings. My car had heated seats, a nice touch. The rest of the materials in the interior look good, with interesting graining patterns, and the clever design carves out as much space for people as possible. There are storage areas in the doors and a small one in front of the shifter, but it feels like you’re looking at an awful lot of dashboard; maybe that’s the price you pay for the rake of the windshield. The overall impression isn’t one of luxury, but of adequacy. The cabin will likely hold up well, except for the silvery fake-metal trim on the center console, but you see a lot of seams all over the place.

Sedan versions of the Fiesta will be a lot less useful than the hatchback. The area behind the rear seats is accessible with the 5-door in a way that’s terribly compromised by having a trunk. Folding down the rear seatbacks in the hatch gives you a surprising amount of cargo room, too. 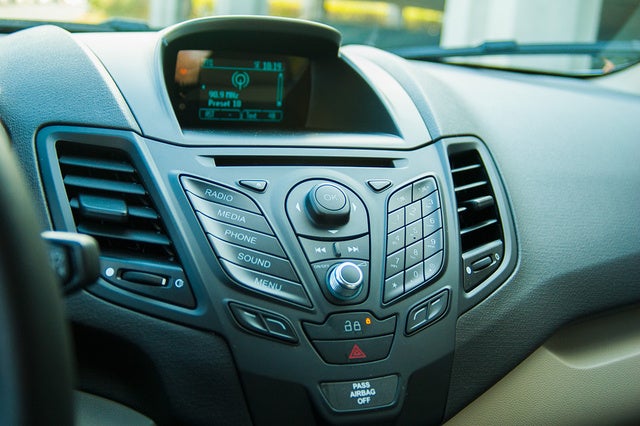 The Fiesta can be optioned up with a lot of features that were once the exclusive domain of luxury cars. For example, the car I drove had automatic climate control, standard air conditioning, cruise control, and power windows and mirrors. You can also get keyless access and push-button start, and a MyFordTouch audio system with touchscreen and navigation. Ford’s Sync hands-free system is standard and integrates Bluetooth audio streaming as well. City parkers will appreciate the available rear-view camera, and Sync AppLink is a slick piece of voice-control software that lets you control apps like Pandora, iHeartRadio, Slacker, Stitcher, and NPR with voice commands or the built-in audio controls. It will also read your incoming tweets to you thanks to OpenBeak. A Fiesta Titanium loaded up with all the goodies is a pretty nice car within a small footprint. 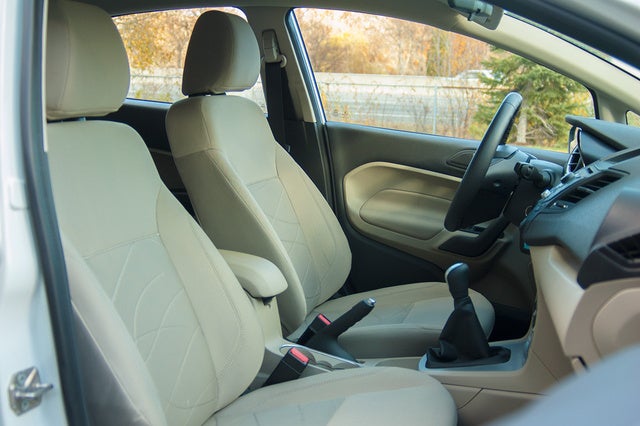 The Fiesta is a small car, so you miss out on the big-car sensation of being inside a rolling safety bunker. On the other hand, front and side visibility are good, and the car is responsive thanks to its light weight and small size. The nimble chassis is its own safety feature, allowing you to confidently maneuver around trouble.

The Fiesta is as safe as Ford can make it, with 7 standard airbags, including a driver’s knee airbag. The body structure that feels so solid to drive also acts as a safety cage. The rigidity comes from high-strength boron steel. There’s also standard AdvanceTrac stability control and the Ford Personal Safety System, which activates the proper safety systems depending on the severity of the incident and the number and position of occupants. 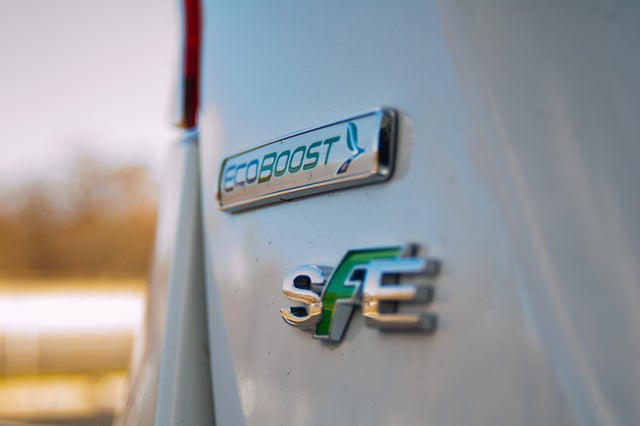 There's enough choice to cover the bargain-basement buyer and the small-luxury shopper. With sedan and hatchback body types and features like leather seating and lots of available technology, the Fiesta covers a lot of bases. With the EcoBoost engine, this is a bit of an odd car among its brothers. The turbo engine carries a Fuel Economy Package, but it’s manual-only and being pitched as an enthusiasts’ delight. It is fun to drive, but the Fiesta ST is even more fun. That’s the one enthusiasts will go for, especially when it costs just about $3,000 more, which isn’t much more per month when financing.

Also, competition in the Fiesta’s segment has gotten surprisingly fierce. There’s the Honda Fit, which goes for about the same money and has an interior that can accommodate more cargo, more flexibly. Chevrolet's Spark and Sonic offer domestic competition, and even Ford’s own Focus could be more attractive because of the extra room it offers versus a Fiesta with some options.

Dan Roth is a Boston-based automotive journalist who’s been writing about cars for a decade. A parallel career as a video producer and creative professional helped open the door to car writing in 2006, when he started working with Autoblog on its long-running podcast and producing videos. Dan has been fascinated with cars his whole life, leading to a large collection of tools, a driveway that houses a broken Volvo, and many sketchbooks filled with designs for his own cars that will never get built.

Users ranked 2015 Ford Fiesta against other cars which they drove/owned. Each ranking was based on 9 categories. Here is the summary of top rankings.

Have you driven a 2015 Ford Fiesta?
Rank This Car

I have a 2015 ford fiesta 1.0 ecoboost. It is currently with my mechanic as it was misfiring and idling heavy. Upon initial inspection, the first issue was just a faulty coil pack. Unfortunately thi...

I talked to Woburn Toyota about a car try to make a deal they tell me car was sold then today i did a search for other cars and that car i was interested in was back at the same dealer but for more mo...

When it is very cold out and I try to start my manual trans Fiesta, it will give me just one click and that is it. When it warms up outside, it fires right up. The battery is brand new and the dea...

214 views with 2 answers (last answer about a year ago)

I have a 2015 Ford Fiesta that wont start. I turned my key and all the lights came on (but not the engine) and a message saying my immobilizer malfunctioned and required service. Now the lights won...

We just bought a used 2015 Ford Fiesta. We got the car home fine and we have a slight incline to our driveway. My husband noticed if he lightly pressed the break on an incline the Fiesta would climb...

152 views with 3 answers (last answer about a year ago)