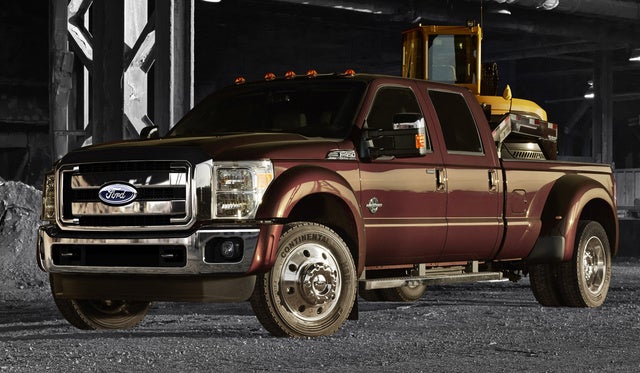 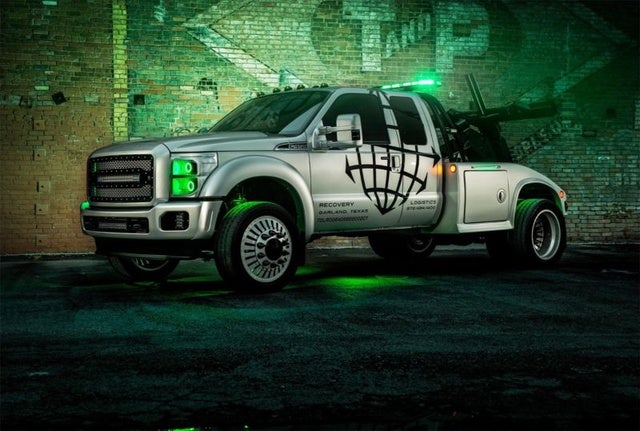 Big, bold and, especially for those Ford aficionados of the world, beautiful, the 2015 version of Ford’s F-450 Super Duty full-size pickup truck gets a mild refresh, an up-powered turbodiesel, a beefier frame and a restyled King Ranch edition. Oh, and 19.5-inch alloy wheels, ironically once part of the 2008 introductory package, are reprised on this already impressive beast for this coming model year, as well. Altogether, the largest of the Super Duty trucks gains even heftier towing and payload capacities, as well as some upgrades to interior appointments. Doubtless Ford hopes that these seemingly incremental upgrades to its heavy-duty truck stable may mitigate a common complaint among reviewers that these super-size Fords trail the competition as far as cabin modernizations are concerned.

In any case, the latest version of the F-450 Super Duty is once again available in 5 traditional trim levels, the base XL, the up-featured XLT, the posh-boosted Lariat, the new and improved King Ranch and the ultra-plush Platinum. This brute is also expected to return in the traditional 6-passenger, 4-door Crew Cab garb, and should again boast standard 4-wheel drive (4WD) and cargo-capable dual rear wheels (DRW).

Ford is keeping things close to the vest, but some small details have emerged regarding the new and improved F-450 Super Duty lineup. First off, its standard 6.7-liter turbodiesel V8 powerplant has been tweaked with a larger and reconfigured turbocharger, as well as improved engine cooling and exhaust braking capabilities. Thus the 400 hp and 800 lb-ft of torque found in 2014 editions has been significantly increased, though the exact figures have not been released. Additionally, the 6-speed shiftable automatic transmission now comes with a bulked-up torque converter, thus towing figures are expected to be significantly higher than the present 18,500 pounds of conventional hitch and 24,700 pounds of fifth-wheel capacity. Finally, a beefed-up frame and suspension system adds to its trailer-toting abilities.

Optional equipment in lower F-450 Super Duty iterations is once again expected to include a number of features that come standard in the higher trims for 2015. The Lariat and above, meantime, are slated to remain eligible for such add-ons as an available power moonroof, with all trims retaining the rights to an available FX Off-Road Package, a fifth-wheel towing-prep package, a spray-in bed liner and Ford’s touted Work Solutions and Crew Chief telematics.

Once again for 2015, the F-450 Super Duty arrives in showrooms without standard stability control, but the XLT and above trims should return equipped with trailer sway control and an integrated trailer brake controller, with all trims carrying forth the traditional 4-wheel antilock brakes (ABS) and traction control. Front side-mounted airbags, front and rear head airbags and a post-collision safety system are expected to return aboard all 2015 variants, as well, with the XLT and higher trims also packing Sync emergency assistance and alerts, and the Lariat, King Ranch and Platinum boasting turn-signal-integrated mirrors. Standard in the pair of higher trims, finally, are front fog/driving lights and an upgraded remote antitheft alarm, each of which is optional in lower-level trims.

I have a 2015 F-450 Super Duty w/ a Jerrdan lift on the rear . Truck is used for towing ... Lately I've had an issue w/ the truck feeling like its restricted, not breathing right, or a governor on ...