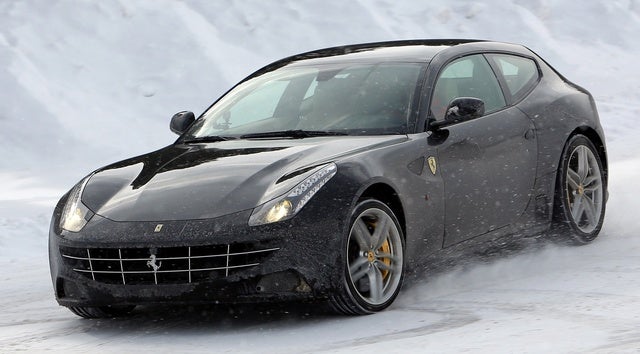 According to the Oxford Dictionaries, “shooting brake” means station wagon, but the phrase has an older definition. It's a British term. The shooting part is as it sounds. People in the 19th century would go out into the forest to shoot things, and they would use a horse-drawn carriage capable of “off-road” travel. The brake part apparently was derived from a rugged carriage that was used to “break” horses. That term, of course, means to make the horse tame enough for riding or for use as a draft animal. The Ferrari FF is a shooting brake made in Italy primarily for people who will never take it anyplace involving shooting, and certainly not off-road, but Ferrari does use a prancing horse as its logo, so there is a lineage.

Why in the world does Ferrari need to make a 4-seat, 651-hp, V12-powered, 4-wheel-drive station wagon? Two reasons, really. First, there's a strong tradition among European supercar makers around station wagons. Ferrari wants to stay a part of that. Second, Ferrari likes to make unique cars that owners can buy and keep for purposes other than canyon blasting, racing, and fancy nights out. The FF is a unique Ferrari, and for that reason alone it is cool. Ferrari suggests that its owners might use the FF as a vehicle in which to go skiing in the Italian Dolomites.

New for 2015, the Ferrari FF will be the very first automobile in the world to have the new Apple CarPlay system. The FF was on display in March 2015 at the Geneva Auto Show with the new Apple system. This is what we have all been waiting for, a much more integrated car-phone connection. One can view things like maps, phone, audio, messages, and more from the phone’s brain on the car’s screen. Furthermore, the menus can be navigated using the vehicle’s screen and steering wheel, or voice controls. Once connected, the Ferrari FF driver can ask her phone to display a map of the area showing the resort destination, check the weather advisories on the way, and then phone her pal for the trip just as one would on an iPhone. Why in the world have we been replicating all this functionality at such high cost in our cars for the past decade?

On the way to the slopes, if there's any snow or ice, the FF will also have a chance to show off its unique AWD system. Called the 4RM system, this combination transmission and drive system is like no other. The engine in the FF is behind the axle of the front wheels. The 4RM system places a 2-speed gearbox up front. This gearbox is driven directly by the V12’s crankshaft and can handle up to 20% of the engine’s torque. The “first” gear of the front transmission correlates to gears one and two in the FF’s F-1 inspired dual-clutch automatic rear transmission. The “second” gear of the front works with gears three and four in the back. Thus, the car can drive both front and rear wheels up to such speeds that AWD is no longer an issue. The system is 90 pounds lighter than a conventional power take-off AWD system. It also shaves off about a third of a second from 0 to 60 when the pavement is dry.

If you made it through that tutorial, you'll be happy to know that there is also a rear “E-differential.” Yes, Ferrari uses an electronic differential to route the torque from side to side as necessary to keep the car planted and power in full use. The torque can also be used to vector the car, meaning to angle it or turn it when cornering by powering the outside wheel, but not the inner. If you thought supercars were all just coupes with oversized engines, you have some catching up to do.

All these novel bits should not detract from the fact that the FF’s gorgeous body was styled by Pininfarina, something we used to expect of all Ferraris. The interior, too, is all Ferrari. The kooky steering wheel that replicates the style of an F-1 car is there, but so are sumptuous leather and now the Apple CarPlay screen.

The 2015 Ferrari FF’s body style may look a little unlike the image we all hold in our heads of a Ferrari. However, it has one of the most modern entertainment and audio systems on the market as well as a technology-laden drivetrain that puts the AWD systems of the brands that rely on AWD for sales to shame. It is also a beautifully styled car with a high-revving, normally aspirated V12 engine. A station wagon, yes, but it is a also Ferrari.

Have you driven a 2015 Ferrari FF?
Rank This Car