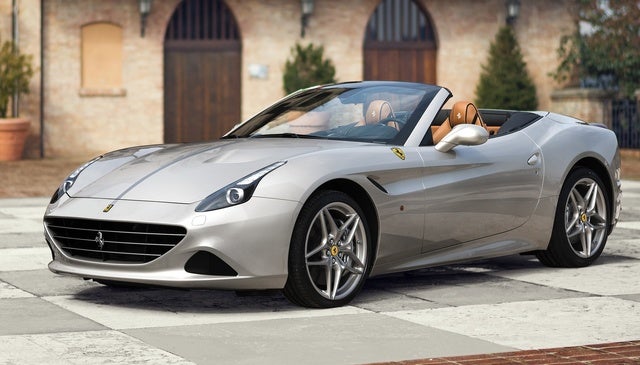 If a supercar has to improve its efficiency to meet government mandates, can’t one tolerate a couple of turbochargers? Of course—even if they come on a front-engine V8 Ferrari like the 2015 California T. Sure, the car lost a little bit of displacement, but the California T is now the Ferrari with the most torque. If you're worried about the sound of the V8 or the responsiveness of the throttle, you should be. However, Ferrari went to great lengths to ensure its signature sound and instant throttle response are still the best in the business.

The Ferrari California T is new in many ways for 2015. Having become the company’s top-selling model, this front-engine, drop-top GT keeps the lights on in Maranello, so it needs to stay current. How wonderful that a car like this is at least one company's bread-and-butter model. Being the top seller, it was the most obvious choice for efficiency improvements that would help balance the company’s corporate average fuel economy. There are lawnmower models that contribute more CO2 to the atmosphere than this car company does, but rules are rules, and Ferrari has the technology and desire to play along.

Since the engine’s forced induction is the big news, we'll start there. The “completely new engine” as Ferrari calls it, displaces 3855 cubic centimeters. That's about a half-liter less than the old California’s normally aspirated (non-turbo) engine did. The two twin-scroll turbos Ferrari designed add a lot of torque at low revs, and 557 lb-ft of torque is a lot by any standard. In a 2-wheel-drive car, it's so much that things get tricky. How to keep that torque under control and get it to the ground becomes a big challenge. Smokey burnouts are for Mustang GTs, not quarter-million-dollar supercars. Ferrari corrals all this twist using a variable boost management system. Ferrari's system limits the boost available in each gear to what the car can use. Smart. Also a good wink and nod to the fact that at this point cars have so much more torque than they can use in the first few gears that the manufacturers are really just engineering the cars for specification-sheet domination.

The engine also makes power: 553 hp is its rated output. That's about 70 more than the last California. The engine’s redline has moved down about 500 RPM, and there are Ferrari purists who cringe at the thought of that. Ferrari is all about its Formula 1 heritage, and those cars scream at high revs. Some reviews say the sound is not the same, but Ferrari is not afraid to let you hear the sound of this engine at full tilt. The company uses recordings of it in all of its marketing output. The transmission is the F-1-inspired 7-speed dual-clutch unit, so if you choose to hold the car at that fever-pitch redline, you can. You will.

Speaking of the F-1 transmission, here comes the green part. All the gears are now taller. That's accomplished courtesy of the huge torque increase (about 50% more than the outgoing car). The new car has 15% better fuel efficiency and CO2 production. Remember, mainstream brands are hobbling cars and using CVT transmissions (ugh!) to get emissions results that big. Ferrari boosted your torque and power. That's a win-win, no?

There are many more updates to this 2+2 seater. The carbon-ceramic brakes are now in their third generation. So too is the magneto-rheological suspension system. The steering is now tighter, and the California T is one of the last cars on Earth using a hydraulic steering pump. One of the coolest features of the car’s ride-control setting is the dampening override button. It lets you set the car to firm and then tap the button if you see a road section that you prefer to handle with a softer ride. Speed bumps and such can also be made more manageable with the button, and the suspension can also be lifted to allow more clearance.

The aluminum hard-top goes up or down in about 14 seconds. The California Design Studio-Pininfarina styled body was changed slightly, but the beautiful look of this grand-touring convertible remains unchanged to the eye. This is the car Ferrari sees its owners using on the road and on the highway. Top-down it is one of the best-looking cars of its type in the world, possibly rivaled by its peer the Maserati GranTurismo. In terms of looks, that's fine company to be in.

The California is often a buyer’s first new Ferrari. More of them are produced than any other Ferrari model (by far), and its price starts at just above $200K. Production started in the fall of 2014, and it at the time of this writing, no sell-outs had been announced, so the car may still be attainable, unlike so many supercars.

What's your take on the 2015 Ferrari California T?

Have you driven a 2015 Ferrari California T?
Rank This Car