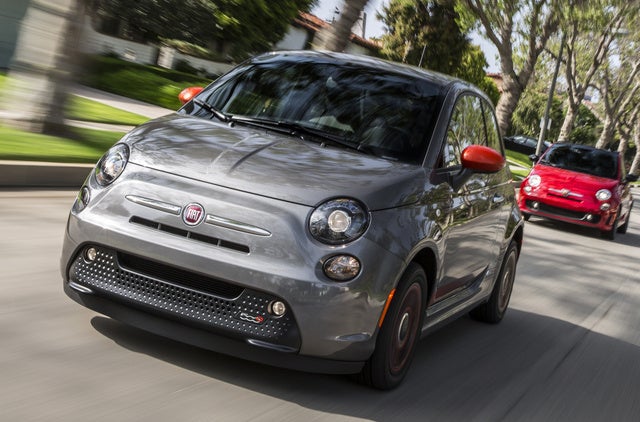 There’s a rumor of a hybrid version on the horizon, but it’s not here yet. Instead, the still all-electric 500e follows suit with FIAT’s 500 for 2015 and gains several interior upgrades for better use of space, improved materials, simplified controls and enhanced technology. Otherwise, the 2015 is just like the 2014—one well-equipped hard-top coupe and all.

Now boasting a modern 7-inch TFT display for the gauge cluster, this 500e is even more sleek inside than the first. Doubling as your usual speedometer, trip meter, range and power meter display as well as the rear-view monitor when in reverse, that little gizmo opens up the center console for greater ease of use and more room for cupholders. Not to mention being one elegant bit of high-definition eye candy.

Interior materials and layout are also reworked for a softer touch and more rear legroom, and the radio includes Bluetooth music streaming as well as an integrated USB port for an overall sense that this FIAT is worth every penny—despite its being nearly $10,000 more expensive than any gas-powered 500 straight out of the factory. But with 122 mpge city/108 highway with its 87-mile range, that’s an easy 10 large you will get back in gas savings by the time you’re done with this fun little ride.

Although there is just one 500e trim, its 83kW electric motor delivers very similar performance to that of the 500 Turbo, and it’s equipped a hair below the top-shelf Lounge. Offering up a near 8-second sprint to 60 mph with its 111 hp and 147 lb-ft of torque, the 500e adds silence to the meaning of screaming speed and handles every ounce of it with a substantial feel.

What it lacks in the 500 Lounge’s leather touches, the 500e makes up for in heated mirrors, solar-tinted glass, keyless entry, automatic climate control, rear parking sensors, detachable 4.3-inch touchscreen TomTom navigation system equipped to locate charging stations in realtime and an Alpine audio system all standard. Any options available to a gas-powered 500 are available to the 500e as well.

The gas-powered FIAT 500 might not stand heads above its competition, but the 500e offers at least 5 miles more range than its nearest comparable competitor even before considering brake regeneration. Drivers report getting better than the 87-mile estimate on a single charge, too (some as many as 100), and every single one says that it’s less costly to lease or borrow for the 500e than to outright own any gas-powered car. Those that did the math claim they’re spending 10% of what they would otherwise.

FIAT isn’t making any promises on that rumored hybrid, but it did make a few auto shows in foreign markets. Whether it’s destined for the U.S. market is still anyone’s guess, but surely this 500e is only the beginning.

I've a compagny that arrange container and take of transport from L.A. to Rotterdam.