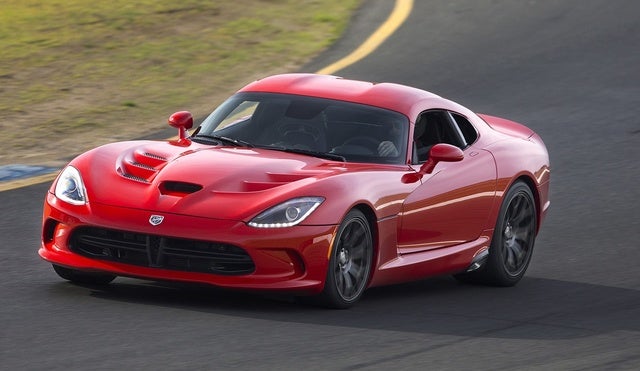 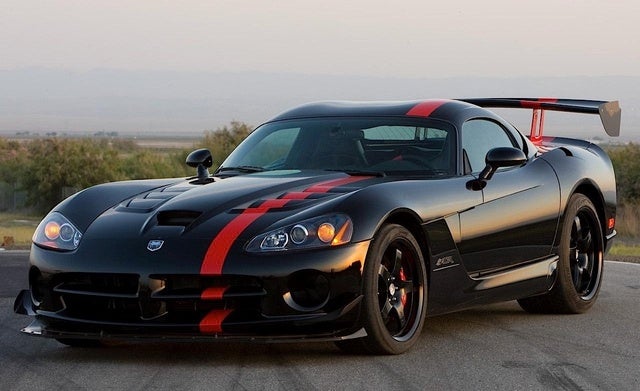 Has the 2015 Viper been tamed, or elevated, or whatever it's called when a car loses its way and becomes just another Sunday cruiser for gentlemen who want an insanely fast car to make the morning coffee run? No: The Viper is the real deal. Don’t believe any rumors you may have heard about the 2015 Dodge SRT Viper. Yes, it's true that Dodge SRT has added some new creature comforts to the Viper, but they have not deleted any of its elemental (or "mental") personality. This vehicle remains a thumb in the eye to any fancy-pants, hybrid supercar on any track, at any time.

SRT’s original Viper formula remains in place today: A V10 engine mounted up front drives the rear wheels of this low-slung track animal. A manual 6-speed is the only way to get your Viper, as no automatic transmission is offered. For what it can do, the Viper was always a value of sorts, but it became even more so in 2015, when the price dropped about 20%. The Viper is not a drag racer, but very few sub-$100K cars can beat its 3-second sprint to 60 mph. Factor in the price range, and the cars that match it straight ahead can be counted on one hand. Now instead of just straight ahead, add some turns, and you'll need only a few fingers to count the cars that can hang with this beast on a road course.

The current-generation Viper started as a model-year 2013 vehicle. For 2015, the Viper receives a few notable changes. First and foremost, its 8.4-liter V10 receives a 5-hp bump to a total of 645. The other changes are the entry of two new trims and some new color packages.

The first new SRT Viper trim offered is the GT. This new package includes a driver-selectable Bilstein suspension and upscale interior, which buyers previously found only on the fully loaded GTS trim level. The suspension features DampTronic shocks with both road and track settings. The interior upgrades include Nappa leather with Alcantara inserts and offset stitching.

The second new trim is the 2015 Viper TA 2.0 Special Edition. TA stands for Time Attack; this is a racecar tuning package for your Viper, direct from the factory. The 2015 version improves upon prior TA packages by adding more downforce from the aero kit and—SRT points out—the brakes are specifically dialed in to offer reduced thermal saturation for track days. SRT isn’t kidding around when it says this is a car ready for track work. The seats are fiberglass shells covered with ballistic cloth material from Sabelt, and are ready to accept your three- or six-point racing harness.

SRT will also paint your Viper with a special three-coat system that produces a “liquid-mercury” effect, resulting in accentuated curves on the car. Stryker Purple and Y’Orange colors are offered with this unique paint treatment. However, it should also be noted that SRT will hand-paint your Viper one of 8,000 custom colors if one of the two highlighted color schemes is not to your fancy.

In addition to the two trim packages and new color package options, the 2015 Viper also trims 25 pounds from the engine for 2015, and sixth gear is revised to offer a quieter cruise on the highway. However, this doesn't diminish the Viper’s track capability, as drivers would be stretched to find a road race that requires use of the top gear.

Like many exotic cars, the 2015 Dodge SRT Viper is a model in which the buyer takes part in a design process. Serious shoppers would be wise to work with an SRT dealer rather than try to configure a car entirely from online information.

Have you driven a 2015 Dodge Viper?
Rank This Car

Computer tells me that left rear is 25psi and I should inflate to 29psi. Tried to inflate but tire would not inflate. I don't hear a leak; pressure holding at 25psi. Is valve stem failing? Thanks ...