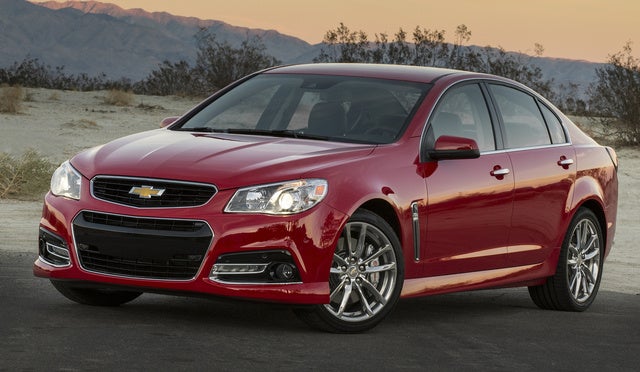 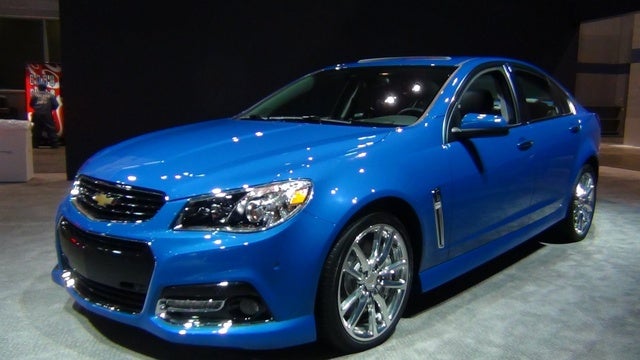 Yearning for a full-size, V8-powered muscle sedan? Then check out Chevrolet’s 2015 SS. In its 2014 debut, this hefty Chevy boasted seating for 5 as well as a jumbo 16.4-cubic-foot trunk, and among noteworthy upgrades for the 2015 edition comes, at last, a standard 6-speed manual transmission.

Again, the showy SS is delivered in a single Base trim, but it packs everything you might need for a lickety-split commute or some dashing devilment on the way to the mall. Available in rear-wheel-drive form only, the 2015 version sports a standard 6.2-liter V8 powerplant that’s now mated with the new-for-2015 6-speed stick-shift transmission. Look once again for 415 hp and 415 lb-ft of torque from this hefty V8, while an available 6-speed shiftable automatic transmission sporting steering-wheel-mounted paddle shifters also manages those same power numbers. Estimated mileage figures with the new manual shifter, by the way, are as yet unavailable, but mileage with the now-optional shiftable automatic should return at 14 mpg city/21 highway. Oh, and an additional tweak for the 2015 SS includes rear Brembo performance brakes, complementing those same brakes that were delivered standard in the front for its introductory year.

According to the folks at Chevy, the SS is capable of a 4.7-second 0-60 time, and that was with the automatic transmission. Stay tuned for times from the stick-shift-equipped edition.

Features-wise, new 4G LTE WiFi hotspot technology that now invests most GM automobiles is, of course, integrated into the standard OnStar directions and connections aboard the 2015 SS, and a brand new magnetic suspension-damping system boasts driver-selectable Tour, Sport and Performance modes to suit your temperament.

Standard techno-gizmos in the 2015 SS include, as mentioned, the now-4G-LTE-equipped OnStar directions and connections technology, as well as GPS navigation with an 8-inch center touchscreen and a 220-watt Bose premium audio ensemble boasting a CD player, 9 speakers, satellite radio and auxiliary audio input via a USB port.

Again for 2015, only a couple of options remain available to this muscle-bound sedan, including a power sunroof and a full-size spare tire mounted on matching alloy wheels.

Finally, the 2015 SS packs such standard safety features as 4-wheel antilock brakes (ABS), traction and stability control, head airbags front and rear, and front side-mounted airbags, all complemented by daytime running lights and front fog/driving lights. Of course OnStar emergency communications technology returns for the upcoming model year, as do high-intensity-discharge (HID) headlights, a head-up windshield display, forward-collision warning and a post-collision safety system. In a further departure from the ordinary, blind-spot and lane-departure warnings remain standard aboard this peppy 4-door, while a remote antitheft alarm is also included once again.

wayne Just got one last week .Wow it really is a great car A real sleeper car When your in it you can feel the power in it. Gas mileage isn,t great but if you keep your foot out of it the mileage reallyisn,t all that bad .But its a lot of fun to drive!

Users ranked 2015 Chevrolet SS against other cars which they drove/owned. Each ranking was based on 9 categories. Here is the summary of top rankings.

Have you driven a 2015 Chevrolet SS?
Rank This Car

I Want Manual Transmission Only. The Search Engine Says It Can Find No Manu...

Have seen a number of used 2015 Chevy SS with quite low mileage- why would one be resold so,quickly?

How Many 2015 Chevy Super Sports With Manual Transmissions Were Made For Th...