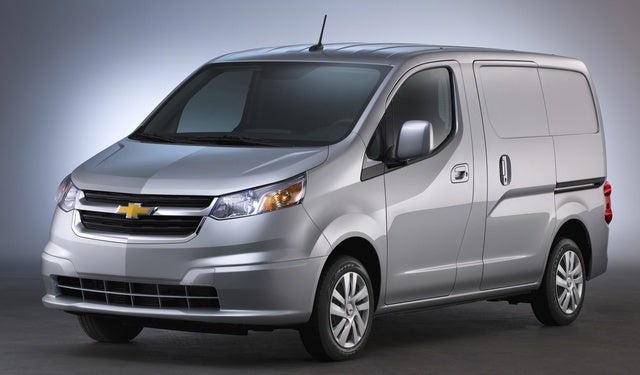 What’s in a name? In the case of Chevrolet’s debuting 2015 City Express, pretty much everything. Offered as an alternative to Ford’s popular and useful Transit Connect, the 2-seat City Express, which is fundamentally a bow-tie-sporting Nissan NV200 minivan, fits quite nicely into the typical urban environment and shouts utility, economy and convenience, though power and performance leave a little to be desired.

Keep in mind that this is, after all, a work vehicle and as such offers few perks. A pair of trims, the base LS and the slightly up-featured LT, constitute the City Express lineup, with each delivered only in front-wheel-drive (FWD) form. Like the Transit Connect cargo version, the City Express offers a cargo bay that’ll allow standing room for the average adult, as well as up to 123 cubic feet of cargo capacity in its competently cavernous rear. Alas, that’s not quite as much toting acreage as the Transit Connect offers, but the Chevy’s standard fold-flat passenger seat will let you fit a 116-inch-long item (maybe a ladder?) on that side and still allow the 40/60 rear barn doors to close. A further advantage the Transit Connect boasts over the brand new City Express is Ford’s offering of a passenger version of its mini-workhorse, which the Chevy lacks—so far.

Power for the 2015 City Express comes from a standard 2.0-liter inline 4-cylinder engine that mates with a continuously variable transmission (CVT) to eke out 131 hp and 139 lb-ft of torque. Yeah, that’s a lot less oomph than is found in the Transit Connect, but the City Express does feature EPA mileage estimates of 24 mpg city/26 highway. Although both vans are designed for economy in big-city traffic, the aptly labeled City Express boasts a better mileage rating than its blue-oval competitor in town.

For those who want a little more posh and preen in their work van, an optional Appearance Package offers body-color bumpers and a chrome grille with black accents along with body-color heated power-adjustable outside mirrors. For the LT, an available Technology Package adds a single-CD player, satellite radio, GPS navigation and a rear-view camera to the bling list, with all of it interfaced via a color touchscreen display.

Both 2015 City Express trims, by the way, can be enhanced with available rear tinted windows and a set of spiffy 15-inch aluminum wheels.

What's your take on the 2015 Chevrolet City Express?

Users ranked 2015 Chevrolet City Express against other cars which they drove/owned. Each ranking was based on 9 categories. Here is the summary of top rankings.

Have you driven a 2015 Chevrolet City Express?
Rank This Car

how much does a Chevy 'City Express' Weight?