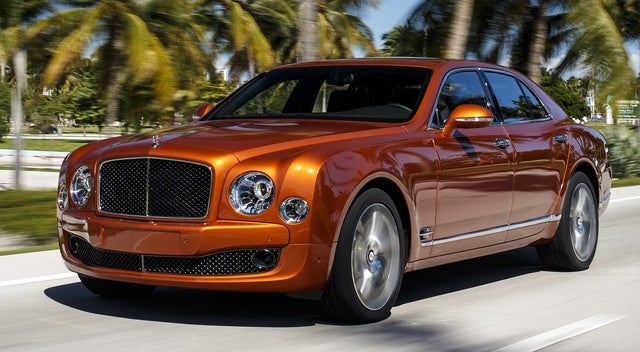 Bentley’s flagship driver’s car is lightly refreshed for a 2015 date with its new stablemate — the Mulsanne Speed. If it’s hard to imagine such a large sedan coming in just a second later than a cheetah, then step into the 811 lb-ft/torque Mulsanne Speed to experience what 4.8 seconds to 60 mph feels like.

As a true Bentley, you’ll see the scenery peel away more than you’ll feel any G-forces, and cracking a window is about the only way you will hear enough engine to know the raw power under the hood of this beastly machine. Since it is touted as a driver’s car some of the engine sound is piped into the otherwise pin-silent greenhouse. Nonetheless, it is still a Bentley — you can opt for a refrigerator large enough for 2 full-size champagne bottles, an option that includes 3 lead-crystal champagne flutes — and the Mulsanne has the suspension to make those useful even on the curviest, high-speed roads.

Exact fuel figures are not published just yet, but Bentley tweaked the mileage in the 6.8-liter V8 used in both the signature Mulsanne and new Mulsanne Speed for roughly 50 miles of additional range over last year. That should turn out to be something like 12 mpg city/20 highway as opposed to the previous 11/18 in the Mulsanne, with the Speed perhaps taking up the Mulsanne’s previous figures.

Bentley hasn't changed a thing about the Mulsanne’s 505 hp and 752 lb-ft of twin-turbocharged torque, but the Speed is bumped up to 530 hp and 811 lb-ft of mind-blowing twist out of the very same engine. The Mulsanne lineup’s 8-speed gearbox is also modified for smoother shifts, improved cylinder deactivation and reactivation, and a more refined pace, adding in a new S mode to keep the turbos raring over 2,000 rpm. But the Speed additionally gets the Mulliner Driving Specifications, standard, which include lightweight 21-inch wheels, a Sport setting in the Driving Dynamics control system, adjustable air suspension and several exclusive cosmetic cues.

Both the Mulsanne and Mulsanne Speed enjoy new interior and exterior options, but that’s the end of the updates. Interior color options haven't changed overall, however Burnt Orange Metallic, and Candy Red Metallic are no longer available as exterior colors, being replaced with Monaco Yellow Metallic, and Silver Frost 3-Coat.

The signature Mulsanne still hits 60 mph in 5.1 seconds with a 184-mph top speed, with the Speed capped at 190 mph. The improved fuel economy means that the signature Mulsanne now offers 380 miles in total range with the same 25.4-gallon fuel tank. The Speed’s range is still unknown, but it should get the same tank — and the same requirement for premium fuel, of course.

What's your take on the 2015 Bentley Mulsanne?

Have you driven a 2015 Bentley Mulsanne?
Rank This Car