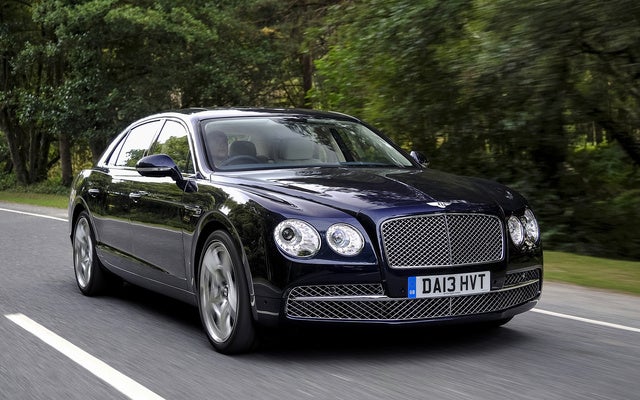 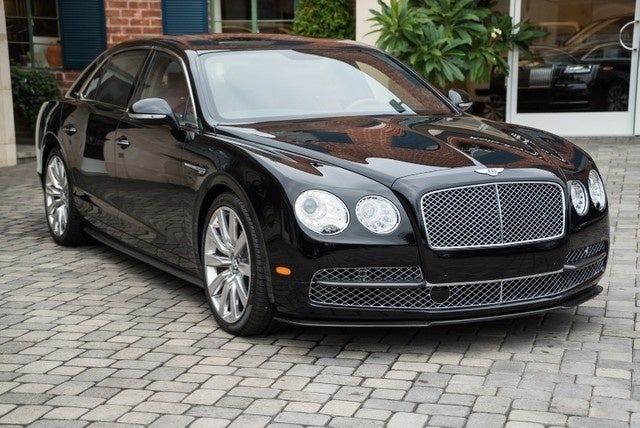 When a Mercedes SL 550, BMW 750, or Audi S8 just doesn’t ring one’s bell, Bentley’s Flying Spur may be the answer. The 2015 Bentley Flying Spur not only has a much more exclusive name than these other sedans, it has much more gravitas. The Flying Spur impressively melds Bentley's famous British styling and hand-crafted interiors with the drivetrain and build quality of Volkswagen’s Audi group. Can you really ask for a more distinguished bloodline?

The 2015 Bentley Flying Spur's new design was first released in 2014 model, when the Flying Spur name dropped the word “Continental.” It also received its own exclusive body style, though the look is familiar to those who know the Continental GT. It's easy to just cut to the chase and call this car the 4-door Continental GT, but that's not the case.

There are two ‛15 Flying Spur trims, with some option packages available for each. First, we have the Flying Spur W12, a large, imposing sedan packing a W12 engine. That is not a typo—the pistons arrangement forms a "W". This is Volkswagen/Audi’s way of saying “Your V12 looks old-fashioned” to brands that still paste two inline 6s together. The 6.0-liter turbocharged engine produces 616 hp, enough to rocket the driver or the driven from 0-60 in about 4.3 seconds. If you own a road long enough, the Flying Spur can top 200 mph. These are impressive numbers for any supercar, but almost unreal for a full-size-plus sedan weighing over 5,000 pounds.

But enough with the facts and figures. The Flying Spur transcends all that. This is a four-plus-one sedan in which an owner can choose to drive or be driven. Either experience is special. The cabin melds modern convenience and technology with diamond-quilted leather. Up front, the driver and passenger can both control the touchscreen. That’s all well and good, but how would you take control of the infotainment from the back? Well, you would use Bentley’s Touch Screen Remote (TSR). The TSR is docked in back, waiting for you to use it like a TV remote to control rear climate and audio controls, among other things.

In addition to individual screens and DVD players for rear passengers, The Flying Spur also offer an available Wi-Fi hotspot. Options also include fold-down individual iPod docks with fixed keyboards for each of the two main rear passengers. The Flying Spur does not lack connectivity, nor does it lack audio. Bentley boasts the available Naim Surround Sound system and its 11 custom-built Balanced Mode Radiator Speakers is perhaps the finest audio system in any vehicle.

When ordering a Flying Spur, you first choose your drivetrain. Will it be W12 or V8? Next color must be considered. Bentley will paint your Flying Spur however you like it at its Crewe manufacturing facility. To “give you inspiration,” Bentley has a palette of suggested colors like “Hidden Depths” (blue), “The Classicist” (black), and “Inner Fire” (white).

Next you decide which packages you want, but these are just guidelines, as your Flying Spur is made to order. The Mulliner specification is encouraged. You can also choose the Mulliner Mulsanne Shaheen edition (a Shaheen is a rare eagle from the Middle East). When you are finished, a transfer of of around $225,000 will take place from your purse to Bentley’s.

There are so many custom coupes and sports cars on the market it's hard to know where they start and end. However, when it comes to custom luxury super-sedans, the Bentley Flying Spur is very possibly the finish line.

What's your take on the 2015 Bentley Flying Spur?

Users ranked 2015 Bentley Flying Spur against other cars which they drove/owned. Each ranking was based on 9 categories. Here is the summary of top rankings.

Have you driven a 2015 Bentley Flying Spur?
Rank This Car