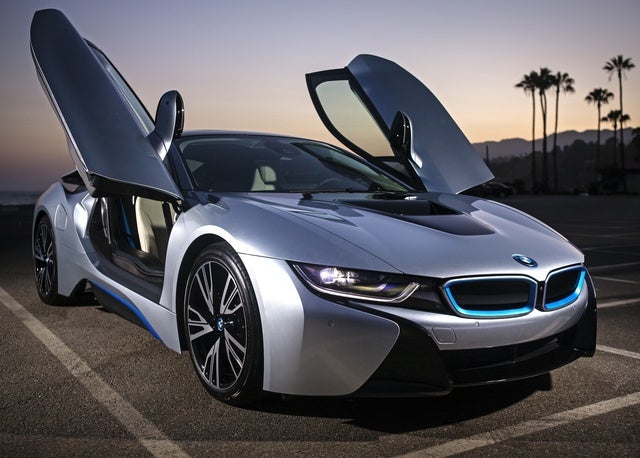 There’s a small problem with a 5-year development time when you’re focusing on new and emerging technologies. As anyone who’s seen old “World of Tomorrow” films and articles knows, the future often looks much different than what we envisioned. Cue the i8, BMW’s answer to the non-existent need for hybrid luxury sports cars. Impressive in execution, dubious in conception and late in arrival, the i8 represents everything right and wrong with the hybrid concept.

When it debuted back at the 2009 Frankfurt Auto Show—with a turbodiesel powerplant—the i8 was praised for innovative construction and aesthetics alike. Two years later it made the trip across the world to Hollywood, landing in "Mission: Impossible—Ghost Protocol." Arriving in the present, the i8 shows up with a gasoline engine from a MINI, an electric motor from an i3 and a 1.5-hour charge time.

You will need a 220-volt setup to achieve that benchmark, but even from a standard outlet, the i8 will achieve a full charge in just 3.5 hours. That's not bad for a car that’ll do 0-60 in 4.4 seconds and allow a total range of 370+ miles—if you buy the optional larger fuel tank, that is. Without the extra, BMW claims 300 miles of total range.

Not bad, but certainly not impressive, especially when considering the Tesla Model S will do 265 miles on electric power alone and beat the i8's 0-60 time by 0.2 seconds. You’ll need to pick the top model to achieve those figures, but even at that premium the Model S beats the i8 on price by more than $40,000.

But let’s talk about that MINI motor in the i8. When powering the German/British basilisk, the 1.5-liter inline 3-cylinder delivers 136 hp and 162 lb-ft of torque, capable of being “boosted” to 169 in the MINI. For the i8, BMW decided to “boost” it a bit more, with 25 psi from the turbocharger resulting in 231 hp and 236 lb-ft of torque. Looks like there was a bit more oomph left in that little 3-pot. It’s attached to a 6-speed automatic transmission and sits behind the rear seats.

But lest you worry about any old 911-style tail-happy shenanigans, the electric part of this hybrid sits squarely over the front axle, providing a near 50/50 weight distribution. It also manages to provide 131 hp, 184 lb-ft of torque, and wholly independent control over motivation, meaning the i8 can scoot along electrically, through combustion power or with a combination of the two for AWD. Steering is electric as well, and while modulated correctly, it offers a numb experience that's helped little by tires whose only feedback seems to be excessive road noise. Should you wish things to come to a halt, 4-piston front calipers are paired with single-piston floating rears in a compromise no one seems happy about.

Once you settle into the cabin of the i8, after navigating those doors that are more pomp than practicality, you’ll notice a few more things. No storage! There are 2 cupholders in the rear “seating” area, but since you’ll be unlikely to put any passengers back there—or at least any passengers you care about—they’re a ceremonial inclusion at best. For the driver, there are 2 small slots within reach, but neither is big enough to hold anything of value besides perhaps a protein bar for a mid-trip caloric boost. And while the front view is spectacular, trying to check what you’ve left in the rear-view can be a complicated endeavor. Those "innovative" rear sculptings seriously hamper visibility over either shoulder, and the tempered "smartphone" glass used for the rear isn’t the clearest material ever used either. Function over form, please.

What you won’t notice is perhaps the only real nod to sustainability in this automobile: the thorough use of recycled fabrics for many of the interior trim components, as well as the natural treatment process (Yes!) used on the cabin’s leather (No!) upholstery. BMW almost got it right there.

In all, there’s a lot of compromise to be had with the i8, and sadly you’re paying the price for it. Leaving the logic of hybrid tech out of the discussion for a moment, you’re simply paying far too much for a car that isn’t the fastest, isn’t the best the drive, isn’t the most efficient and doesn’t even have the furthest range. As it stands, the i8 rolls out with old technology to fill a niche that no one really wanted. After all, what good is a GT car that can’t go the distance and isn’t very nice to drive? I’d prefer to pay less for a faster all-electric that won’t be wholly obsolete in just a few years.

How much does maintenance cost on an 1. annual basis? 2. Also per service? And 3. How many times a year does the I8 need to be serviced.

636 views with 4 answers (last answer about a year ago)

WHAT IS THE PROCESS FOR BUYING A CAR CASH

WHAT IS THE PROCESS ON PURCHASING THROUGH CAR GURS? IS THERE A FEE FOR DOING IT? WHO PAYS THE FEE IF THERE IS ONE?