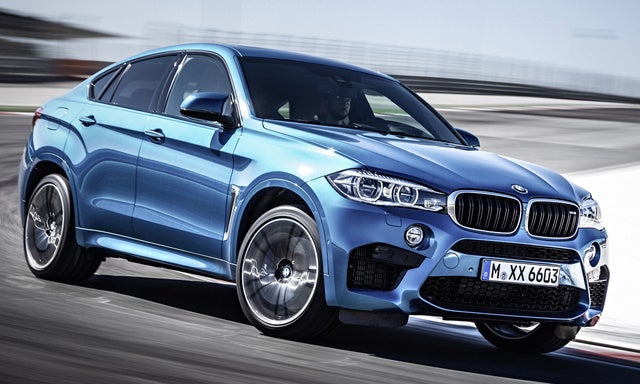 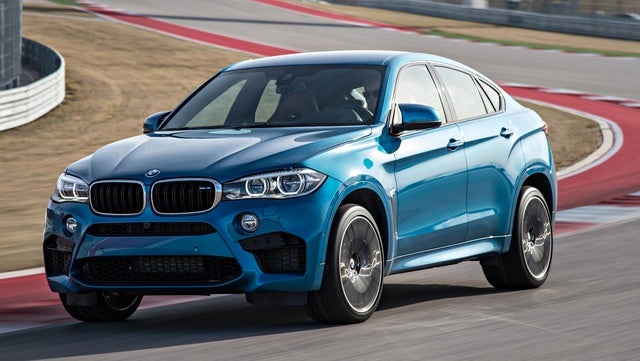 More—and less—than your average midsize crossover ute, BMW’s 2015 X6 M offers a ton of posh, power, and performance, but not a wealth of practicality. Adding a bunch of performance-oriented M-branded goodies to the standard X6, this 4-passenger 5-door luxury quasi-crossover looks a lot like a fastback sedan, even though it acts like a high-end sport coupe. Sharing the same platform and powertrain as its somewhat more practical and equally high-end X5 M cousin, the X6 M offers less cargo area than most of its rivals at 59.7 cubic feet, and its sloping roofline looks sexy but makes loading difficult. Atonement for utilitarian sins, however, comes in the form of a standard sport-tuned suspension, a turbocharged powerplant, and a cornucopia of included creature comforts and appearance enhancements.

As for new stuff, this year’s X6 M, which remains offered in a single Base trim, sports some added ponies and a new transmission, as well as a number of subtle improvements to interior accents, blacked-out front grilles, carbon-fiber exterior mirror caps, distinctive LED door-sill lighting, and racing stripes on the exterior rear side panels.

Power-wise, the 2015 X6 M returns with the 4.4-liter twin-turbocharged V8, but adds 12 ponies and 53 lb-ft of torque for a total of 567 hp and 553 lb-ft. A standard 8-speed shiftable automatic transmission replaces last year’s 6-speed automatic gearbox. In combination with standard automatic engine stop/start technology, the new transmission improves gas mileage by 20% over last year’s 12 mpg city/17 highway. The new shifter also features a selectable Sport mode to complement its traditional full-time intelligent all-wheel drive (iAWD), along with BMW’s legendary Launch Control, which helps this potent screamer zip from 0 to 60 in an eye-popping 4.3 seconds.

Now let’s face it, Bimmer didn’t make its name by skimping on the bling, even in its so-called utility vehicles. The 2015 X6 M sports such standard appearance adornments as 21-inch alloy wheels, a power sunroof, heated reverse-tilt power-folding and power-adjustable auto-dimming mirrors, a rear spoiler, and M-designated quad exhaust pipes.

Inside, expect to find, besides the leather-trimmed, heated, and power-adjustable M-style sport front seats, M-oriented gauge cluster and steering wheel, cruise control, power-adjustable telescoping tilt-wheel steering, and memory for driver's settings. Also gracing the cabin are traditional perks like dual-zone auto climate control and Bimmer’s infotainment telematics, which include Bluetooth-interfaced BMW Online and MyInfo mobile WiFi and smartphone apps, all of which are under the management of the console-mounted iDrive touchpad system.

Of course, the latest version of the X6 M also offers a standard rear-view camera, front and rear parking sensors, an auto-dimming rear-view mirror and a hard-drive-based navigation system with 10.2-inch display.

The Executive Package, with a head-up display, heated rear seats, soft-close doors, and a heated steering wheel returns as an option aboard the 2015 X6 M, as do such extra-cost add-ons as parking assist, enhanced Bluetooth capability, upgraded wheels, and rear-seat DVD entertainment. A further available add-on is an upgraded 825-watt Bang & Olufsen Surround Sound audio system.