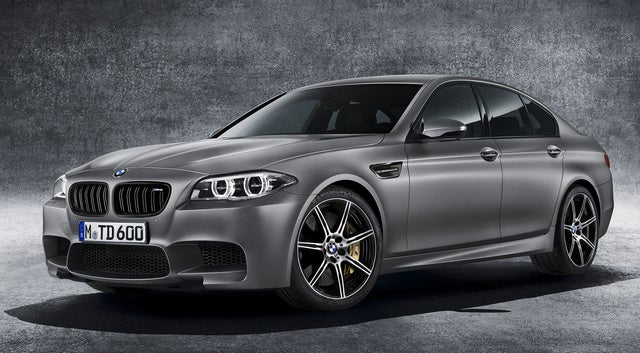 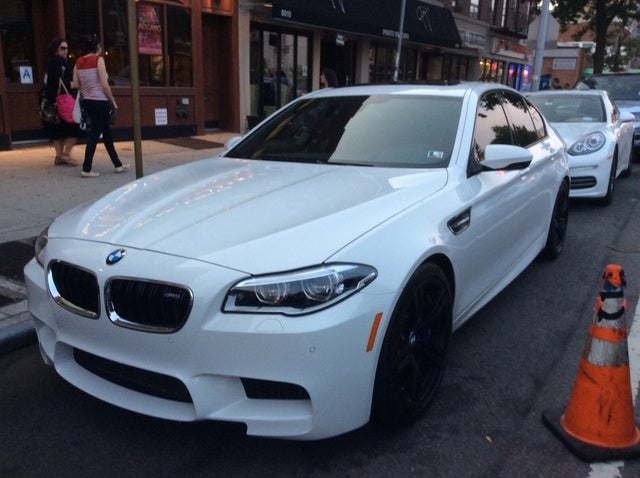 When BMW’s 5 Series is appealing but not quite potent enough, take things a step further with the 2015 BMW M5 midsize luxury performance sedan. This 5-seat super-commuter car is in its sixth generation and reflects Bimmer’s recent emphasis on providing posh and performance. This latest generation has added a slew of extra standard and available creature comforts to the M5’s recently standardized turbocharged V8 powerplant, while the available Competition Package adds even more ponies and posh. In other words, this isn’t your father’s V10-powered, old-technology M5.

In its most basic form, the rear-wheel-drive-only (RWD) 2015 M5 returns packing a 4.4-liter twin-turbocharged V8 engine. Once again, expect 560 hp and 502 lb-ft of torque from the force-fed V8 under the stewardship of either the standard 7-speed auto-manual transmission or an available 6-speed manual transmission that can replace the auto-manual at no extra cost. Furthermore, the 7-speed automatic comes with steering-wheel-mounted paddle shifters, while automatic engine stop/start technology and a torque-vectoring rear differential (Active M Control) remain standard with either transmission. One test had a stick-shift-toting M5 blasting from 0-60 in 4.5 seconds, with EPA mileage estimated at a respectable — though hardly overwhelming — 14 mpg city/20 highway.

Selecting the available Competition Package for your M5 means upping the oomph factor to 575 hp with a few tweaks to turbocharger pressure and the engine control module, while further fiddling bumps the 30th Anniversary Edition’s power output to 600 hp and 516 lb-ft of torque.

For standard appearance features, look for the 2015 M5 to tote 19-inch alloy wheels, a power sunroof, rear spoiler and heated power-adjustable, reverse-tilt mirrors once again. Trunk space remains 14 cubic feet, which is about average for the class.

Besides the optional Competition Package with its up-powered V8, sport exhaust and beefed-up suspension and steering, the 2015 base M5 can be delivered with an available Executive Package that adds a power-opening trunk lid (with foot-swipe sensors beneath), heated steering wheel, soft-close doors, 4-zone climate control, heated rear seats and ventilated front seats.

Rodney This is a great car regardless of age.

How can I list my car as certified? I just purchased a warranty for it 3yr up to 100k miles which makes the car more desirable and priced better against certified cars but your system is saying its ov...

Just bought a BMW M5. It has an installed radar detection system. How do I shut it off or mute it?? It goes off of the time and is entirely frustrating. Please help!