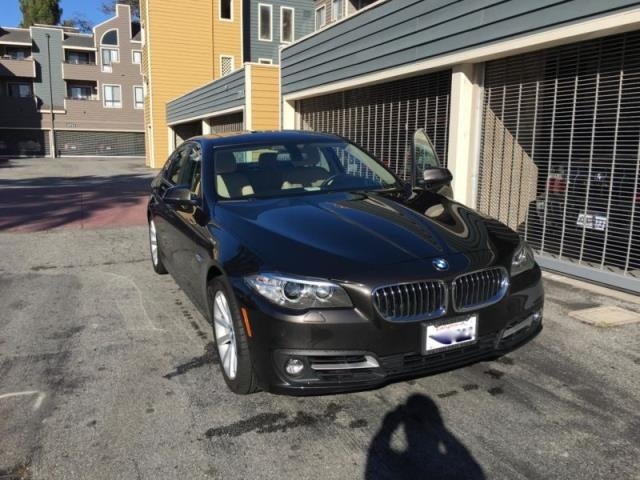 BMW has a host of powerful fuel-efficient sedans from which its loyal customers may choose. The 2015 BMW ActiveHybrid 5 is one choice BMW shoppers should consider if their priorities include fuel economy and emissions. This hybrid is no slowpoke, but rather a very powerful premium sedan that makes the most of a gallon of gasoline.

The 2015 BMW ActiveHybrid 5 uses the wonderful 3.0-liter inline 6-cylinder (I6) TwinPower Turbo engine much loved by the BMW faithful. This engine is paired with a ZF 8-speed automatic transmission that was designed specifically to work with electric-assisted gasoline hybrids. Adding the 55-hp electric motor that is between the transmission and the engine, total power produced is 335 hp. Torque is bumped up a bit, too, though this qualifies as bringing coal to Newcastle, since the TwinPower Turbo is already an engine that was designed for a low-RPM, flat torque curve.

The resulting performance is respectable. This full-size sedan can leap off the line and run to 60 mph in 5.7 seconds according to BMW, who always understates its cars' performance figures. The approximately 230 pounds of added weight the lithium-ion batteries add will not be felt by most discerning drivers. However, the performance of the 535i's gasoline engine (non-turbo) will be about identical to this hybrid's, so the electric drive does not make the vehicle noticeably faster.

Fuel economy for this full-size 2015 BMW ActiveHybrid 5 sedan is better than the BMW 535i's by about 8%. The EPA estimates that drivers will see a fuel efficiency of about 26 mpg combined in the Active Hybrid 5 and 24 mpg in the 535i. In the city, the hybrid will get about 23 mpg, and on the highway, 30. Given the car’s size, weight and performance, these fuel-economy numbers are respectable. But here is where the decision to buy an ActiveHybrid 5 gets a bit troublesome. BMW has two other engines for this same sedan that are greener and more fuel efficient and produce less CO2 and smog-causing emissions.

The 2015 BMW 535d is a diesel-powered version of this same car. Although its horsepower rating is low for the class, at only 255 hp, it produces a whopping 413 lb-ft of torque at only 1,500 RPMs (basically at idle). BMW can exploit that using a specially tuned 8-speed transmission, and this car can match the performance of the BMW ActiveHybrid 5. The fuel economy for the BMW 535d is much better in every driving condition. The EPA estimates it will return mileage of 30 mpg combined—about 26 mpg city and 38 on the highway. The diesel’s smog rating is better, and it produces less CO2 per mile than the BMW ActiveHybrid 5. Finally, it is about 150 pounds lighter and less expensive.

BMW’s 528i has a 4-cylinder turbocharged gasoline engine that will move this BMW sedan around quite well. It is a bit better on gasoline than the BMW ActiveHybrid 5 and costs about $5,500 less. If one is shopping for a BMW sedan and performance is not a top priority, and if the driver is not one who drives aggressively, this BMW gasoline engine is greener than BMW’s ActiveHybrid 5 engine. To say that the choices are complex is a fair analysis.

The 2015 BMW ActiveHybrid 5 starts at an imaginary price of $62,850 including destination and handling. You will almost certainly not find one for that price on a dealer lot. Add things like keyless entry, carpeted floor mats, metallic paint, heated seats and the driver aids befitting a luxury sedan, and the price will be someplace north of $72,000. Interestingly, that is almost exactly the same price as a Lexus GS 450h, which is a 6-cylinder hybrid vehicle of this same size. We bring that up to emphasize that although this price tag may shock Honda Accord shoppers, those looking for a premium performance sedan this size that has been touched by the magic green wand will not be shocked to hear that negotiations begin above $70K. Like all BMW vehicles, 4 years or 50,000 miles of maintenance for the BMW ActiveHybrid 5 is included in its price. The hybrid components also have an extended warranty that varies by state. Ask your dealer for specifics.

BMW emphasizes that the 2015 BMW ActiveHybrid 5 can come with a Harman Kardon Surround Sound system or a Bang and Olufsen high-end Surround Sound system. The ActiveHybrid 5 will also come with BMW’s new iDrive 4.2 infotainment system with a touchpad controller. Like all premium cars, BMW offers telematic Concierge services with Critical Calling. Look closely at the model you shop to see how it's configured. Most BMW 5 Series sedans we've seen on dealer floors are fully equipped.

The BMW ActiveHybrid 5 is a very low volume vehicle for BMW, so ordering one may be necessary. If you plan to order one, it would be wise to consider the implications on the vehicle’s resale value if you omit a system most buyers will want. Leasing may be wise given this car’s very small market niche, given that a private-party sale in 5 years may prove difficult.

Have you driven a 2015 BMW ActiveHybrid 5?
Rank This Car