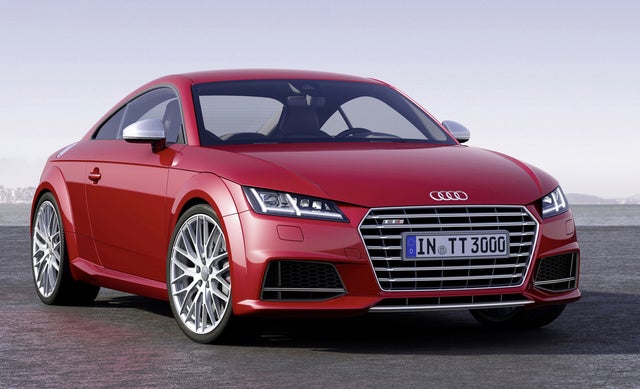 The renowned driving enthusiast's mistress is revamped for 2015 with improved grace, a new dress and a quickened step. While the TT is certainly “wife material,” the TTS was always just a bit too much to bring home to mom—she might insist on driving—and a power bump up to 300 hp this year isn't exactly taming it. That's almost as big a power jump year over year as the TTS was over the TT for 2014, and with the long-awaited addition of MMI telematics, the 2015 TTS is sure to become a favorite.

Just about everything gets a touch-up for 2015 except the all-wheel Quattro drivetrain and 6-speed dual-clutch automated manual. Whether usable interior space might increase with the body's inch-here and inch-there gains and total interior restyle isn't confirmed, but the coupe's 2+2 seating isn't expected to be any more spacious in the back than previous versions. Trunk space, too, should remain around 13 cubic feet for the coupe and 8.8 for the Roadster convertible.

The largest and perhaps most noticeable change will come from the TTS's newly restyled body. Longer, wider, lower and lighter than previous years, this TTS won't change much in terms of overall looks or driving manners, but how it feels for how far you can push it should become dramatically more exciting with the lower stance alone. Of course suspension tweaks would be necessary to maintain that performance edge over the TT, but the upgraded brakes and adaptive suspension are here to stay. So, too, should the 19-inch alloy wheels carry over unedited.

That said, everything points toward stability-through-predictive-tech on the order of a Bentley, but in a sporting manner along the lines of Maserati; carefully refined control would be necessary in any self-driving car anyway, and it's been 3 years since the TTS was tied with that project. No promises yet, but the standard addition of Audi's high-tech navigation and infotainment system in every 2015 TT (dubbed “MMI telematics”) is surely just the first rose toward that self-driven wedding, and suggests the TTS might use yet more advanced technology in the suspension than its TT sister for this generational debut.

Maybe not for 2015, but look for more by-wire and similarly advanced suspension measures, definitely by the time this generation is ready for a refresh in 2019. It's really not as far away as it sounds, especially not when you can go there at more than 120 mph. If you don't have a track good for that speed, the other kind of daily driving is hosted by newly refined style for 2015, which should still be just as quiet with the top up as the coupe.