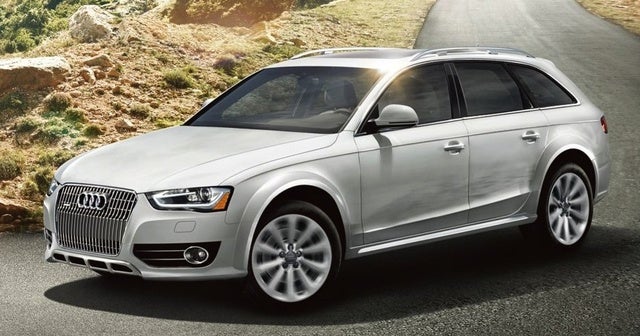 CarGurus has 307 nationwide A4 Allroad listings starting at $7,500.

When it comes to utility, the station wagon is the driver’s choice. Forget SUVs and crossovers and the dozens of examples of each attempting to be both or neither—the station wagon is the choice to make if you care as much about driving as you do about hauling. With the Allroad, you truly get a pleasant blend of on-road performance, off-road “poise” and gobs of space. It’s not the biggest, it’s not the fastest, and it’s not even the most capable when leaving the pavement, but it’s a hell of a good option in a rather limited pool.

For those who were paying attention, this isn’t the Allroad’s first time around the track. Previously based on the A6, the Allroad took a break and returned with a new A4-based platform while losing the low-range gearing and height-adjustable suspension of the previous iteration. With the vast majority of owners never heading further off-road than a bit of parking on grass during a soccer game, it’s not much of a loss.

Still, the Allroad comes with skid plates, 7.1 inches of ground clearance and a total cargo volume of 50 cubic feet. While we no longer get the added security blanket of that low-range gear, the stability control system has a mode that allows for some extra wheelspin for getting out of the slop. That’s on top of the very latest and very capable Quattro AWD that comes with the only drivetrain setup available—the turbo 2.0/8-speed automatic.

Now making 220 hp and 258 lb-ft of torque, the 2.0 can bring the Allroad up to 60 mph in just 6.4 seconds when the transmission’s Sport mode is engaged. And thanks to 8 speeds to choose from, it’ll still return an EPA-estimated 21 mpg city/28 highway, although owners and testers have reported even better numbers. And while the engine doesn’t make the Allroad the fastest among its short list of competitors, it still manages to outperform similar vehicles like the Volvo V60 and the BMW 328 Sports Wagon in the very important skidpad and braking tests.

So with the drivetrain standard across the trim lineup, it’s all about the features you want with your funmobile. With the Premium trim, LED taillights have just been made standard, to join the LED turn signals and standard fog lights you get with the Allroad. Headlights are Xenon Plus and also a new standard feature. Also joining the “comes with” list are a power liftgate, 3-zone climate control and rear privacy glass, but you're already getting leather upholstery, a 10-speaker stereo with SiriusXM, the Audi music interface and driver info system and a panoramic sunroof. 18-inch alloys are wrapped in all-season tires that handle rough road and imperfections better than the A4’s shoes.

Premium Plus trims get heat and memory for the front seats, automatic climate control and power-folding mirrors, while the top-tier Prestige trim gets you a 14-speaker Bang & Olufsen stereo with HD radio, navigation with Audi Connect, a rear-view camera, keyless start and a color driver info system. And while the options list lets you add anything from adaptive cruise control to a full-paint finish, special note should be made of the sport seats and the shift paddles. The former replaces what some have complained are extremely uncomfortable seats, especially for the long haul, and the latter simply makes the driving experience more enjoyable overall.

Even with all these benefits and a significant price advantage, the Allroad is still outsold by Audi’s SUVs and crossover offerings. Bigger is always better, it seems, and no one wants to feel like they’ve been left with the runt of the litter. But this is no runt. This is a solid answer to a lot of automotive questions that have been overlooked for far too long.

Cars compared to 2015 Audi A4 Allroad

CarGurus has 307 nationwide A4 Allroad listings starting at $7,500.