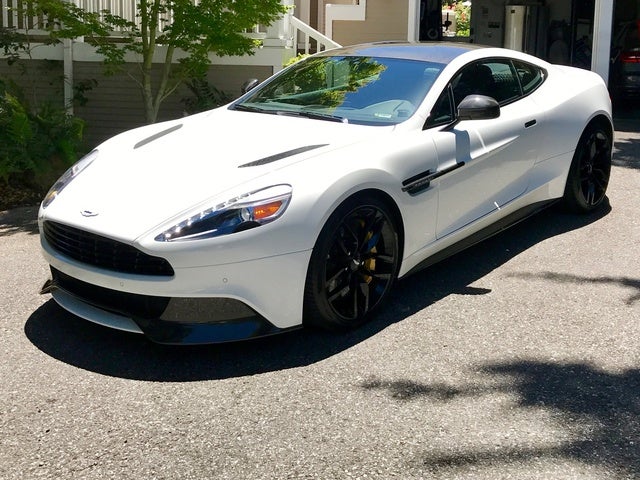 The Aston Martin Vanquish has remained pretty much the same car as when it was introduced about 12 years ago.This would be the worst of insults for a midsize commuter car, but for a V12 grand touring car with a lineage like Aston’s, many say “Bravo.” Not to say the car hasn't changed in its fine details, and indeed there is one significant change for 2015. Though with Aston Martin, once you reach perfection, messing with it is just bad taste. (For reference, please see any supercar with a hybrid drivetrain.)

The 2015 Aston Martin Vanquish is missing one thing and thank goodness: turbochargers. Its V12 produces enough power to rocket the vehicle to 60 mph in under 4 seconds. It can carry the vehicle to speeds above 200 mph on an accommodating course. So why does such an engine need to be turbocharged? Turbos reduce throttle response. Those few reviewers who have tested the Vanquish say its power delivery is wonderfully linear, and it has an exhaust sound unsurpassed in the automotive world. Just for the record, the engine produces 568 hp. If you are looking for the supercar keywords, here you are: carbon ceramic brakes, aluminum space frame, and carbon fiber body. And the Vanquish remains one of the last great cars with hydraulic steering assist.

Here we should discuss the biggest change to the Vanquish for 2015: the transmission. If there is one area that has blossomed over the decade since this supercar was first built, this is it. Again, Aston chose the right path. Rather than a touchy dual-clutch transmission, Aston chose a supercar-proven, very modern, torque-converter-equipped unit from ZF. It is a transaxle, and Aston considerably modified the vehicle this past year to enable the use of this new 8-speed (up two gears over the past version). Besides shifting faster and more smoothly when stressed, it enables that sub-4-second sprint and the 201-mph top speed. Prior to using this transmission, those things could not be achieved.

The Aston's look is most often defined by its front air intake or grill. Ford owned Aston Martin for about 20 minutes, and both parties benefitted. Ford injected quality control via a main-line IV. In return, it stole Aston’s front end and applied it to the Ford Fusion and other vehicles. Nobody ever says, "The Vanquish looks like a Fusion.” They say the opposite, and that's a high compliment.

The 2015 Vanquish also has some new colors for the new model year. Its price remains in the $300K range, and if you wish to acquire one, you will work with a personal designer. Telling you what options it has would be silly, as the car has over 100,000 interior configurations, according to Aston Martin.

The Vanquish is one of the most capable and exclusive grand touring vehicles in the world. We will not argue with the company’s claim that it is “the ultimate grand tourer.”

What's your take on the 2015 Aston Martin Vanquish?

Have you driven a 2015 Aston Martin Vanquish?
Rank This Car