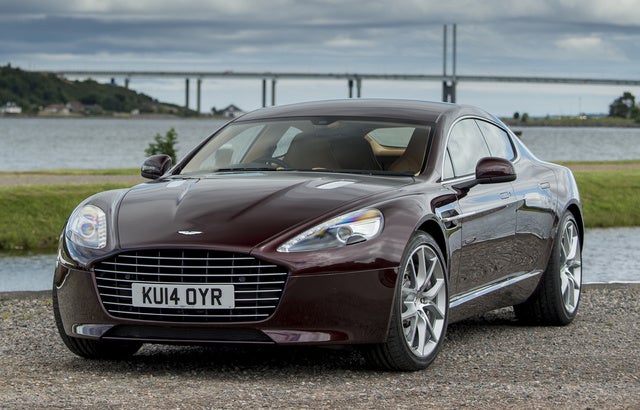 Aston Martin manufactures just four models of automobiles, so it’s not surprising the Rapide S remains the only sedan. Speaking factually, the Rapide S is a five-door hatchback. Here in the U.S. we envision a rusty econobox from 1979 when we use the term hatchback, so we’ll go with sedan for this preview, just so folks get the right idea.

The 2015 Rapide S is a long, low-slung car with the classic nose that identifies the Aston Brand. In the case of the Rapide S, the full-face front grill, “honed as a single piece by hand” according to Aston, fronts what the manufacturer calls “…the most beautiful four-door Aston Martin [has] ever made.” From the front, Aston Martin did a fine job of keeping the look clean and elegant. However, the car’s best angle may be the rear 3/4 view. Here, the fastback design looks very European. Squint at this car from any angle and you can see where Tesla’s Model S drew inspiration (imitation is the sincerest form of flattery). Along the sides of the Rapide S is a bold accent line running horizontally back from the front fender and ending midway of the rear door. The rear features dual-exhaust outlets integrated into the painted rear bumper, a classy look compared to most cars.

Getting some of the mundane numbers out of the way, the rear-wheel-drive Rapide S has 4 seats, 4 doors (plus the rear door), and has a 12-cylinder engine with 8 forward gears. Not many cars in the world have this set of numbers. The engine develops 552 hp, which is one of the more fun numbers the Rapide S produces. Another couple of fun ones include the 203 mph top speed and the 4.2 0-60 time it can throw down. The Rapide resided in a pretty exclusive club with a few Germans and Italians, until Dodge’s SRT Charger and Cadillac CTS-V decided to come to the party at half the cost and spoil all the exclusivity. Still, the Aston has a certain panache that the Cadillac and Dodge don’t have. Yet.

Like most supercars, Aston Martin sources its 8-speed automatic Touchtronic III transmission from ZF. The transmission receives universal love for its quick shifts. Automakers themselves can help to tune the transmission, and the quality and durability has a flawless reputation. Aston has continued to improve its V12, and for this model year the power slightly increases.

The aluminum, magnesium, and carbon fiber composite body helps keep the weight under 4,400 lbs. This sounds heavy for the specifications of 2-door compact coupes., but the Rapide S isn’t compact or a coupe, though it is still a sports car in many ways. The suspension has normal, sport, and track modes. Aston Martin says the Rapide S is its most agile 4-door ever. Those who have reported on the vehicle tend to agree.

The EPA estimates that the Rapide S will deliver 14 MPG city/22 highway/17 combined. There was a time when the fuel economy of exotic cars didn’t really matter. We don’t live in that time anymore, as evidenced by a car (which looks shockingly like this 5-door) that sells like gangbusters and uses relatively little gas.

The interior of the Aston Martin seems rather unusual. The rear seats are buckets and look like racing seats, but with tufted upholstery. They are separated by a very high center tunnel that houses rear seat environmental controls and two honking cup holders. Behind the seats, the rear cargo area is trimmed in the same upscale materials as the rest of the cabin.

Up front, the driver’s space is simple and, in a way, old school. The center stack has fancy, yet modern looking switchgear. The audio system by Bang and Olufsen has a kilowatt of speaker-pounding power. Modern conveniences include a 6.5 inch screen, Bluetooth, and connectors for a variety of devices. Leather dominates the dash material, accented by shiny metal and carbon fiber. Aston Martin seems to be downplaying the “wooden-dresser” look in favor of more modern materials. How refreshing.

What's your take on the 2015 Aston Martin Rapide?

Have you driven a 2015 Aston Martin Rapide?
Rank This Car