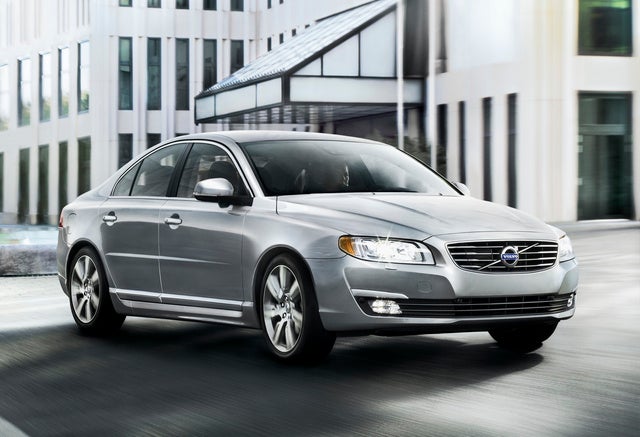 Volvo's largest sedan takes its second-generation bow for 2014, 9 years after this generation's debut and technically 3 years late by industry standards—but nobody is complaining. Gaining basically the same infotainment system, configurable digital gauge cluster and cosmetic updates its smaller S60 brother likewise is for 2014, the S80 is scheduled for a complete overhaul next year that promises to advance automaking as we know it by leaps and bounds. That is to say—more leaps and bounds than it does for 2014.

With a world-first 7-inch touchscreen that recognizes gloved fingers to control its all-new Sensus Connected Touch infotainment system, the 2014 S80 isn't throwing your typical going-away party. Sure, you've got the same broadened selection of interior styles and a freshened-up nose with a few of the other cosmetic updates so typical of a generation's last year, but the ability to share a Wi-Fi connection with everyone in the car isn't really anything to sniff at, either.

All the other changes seem to pale in comparison, its all-new fully customizable digital gauge cluster somehow less impressive standing immediately next to that particular nugget of innovation. But Volvo absolutely isn't stopping there.

With a goal to win over even more sport luxe drivers than ever before, Volvo took to an in-house redesign for the 2015's big debut, partnering with Japanese makers to refine all-new engines and a new, more versatile platform dubbed the Scalable Platform Architecture (SPA). As the name suggests, this divergence from Ford technology uses a BMW-like modular platform with a few more conveniences than your typical 4-door sedan might offer.

In particular, one such nicety is a little thing Volvo calls “Auto Valet.” Ever wish your car would park itself, without the hassle of finding a spot first? Although there aren't many details yet as to how this is accomplished, this system is touted as doing just that. It's expected to debut first in the all-new 2015 XC90 crossover. If you're feeling froggy about the possibility, the maker expanded its use of throttle-by-wire since the 1990s to more drive-by-wire technologies. Infiniti's first-ever application of just such a system in a production car (the all-new 2014 Q50) offers several reassuring fail-safes, and if Volvo's history is any indication, you can rest assured the S80 will only be more safe because of this innovation.

Otherwise drivers aren't saying much about the current model, which carries over largely unchanged for 2014, apparently satisfied with the base 3.2's naturally aspirated 8-second journey to 60 mph from a standstill with a rating of 19 mpg city/28 highway. Good for just 240 hp and 236 lb-ft of torque, this baseline engine is less powerful than the S60's likewise front-wheel-drive base and probably the only thing that won't be missed.

The T6 also has an inline 6-cylinder (I6) setup using the same 6-speed automatic transmission, but all-wheel drive is obligatory for a slightly worse 18/26 regular fuel economy. Boasting 300 hp and 325 lb-ft of torque, sweet 60 takes but 6 seconds to attain with this powertrain—easily the favorite of the pack, but it, too, has its issues. Unlike the rumored new engines, Volvo's current turbos suffer from your typical Ford stutter if constantly run hard without a chance to warm up on cold, dewy mornings.

Here to stay, though, is Volvo's recently adopted upgrade convention, which made the S80's Premium Plus and Platinum “trims” into option packages available with any powertrain. Still offering up just shy of 15 cubic feet in the trunk with a literal buffet of safety features, there are few better options for transporting 5 in secure sophistication for 2014—and fewer still come 2015, if all those videos and press releases prove to be true.

How Long Does It Take For An Agent To Contact Me After I Sign The Bill Of S...

I signed the bill of sale yesterday and I am supposed to wait for an agent to call me. How long does that take?