[T]he R-Design’s powertrain was just flat-out fun to play with on seldom-traveled back roads, doling out ample grunt accented by a hearty exhaust note that was audible yet not annoying or intrusive. 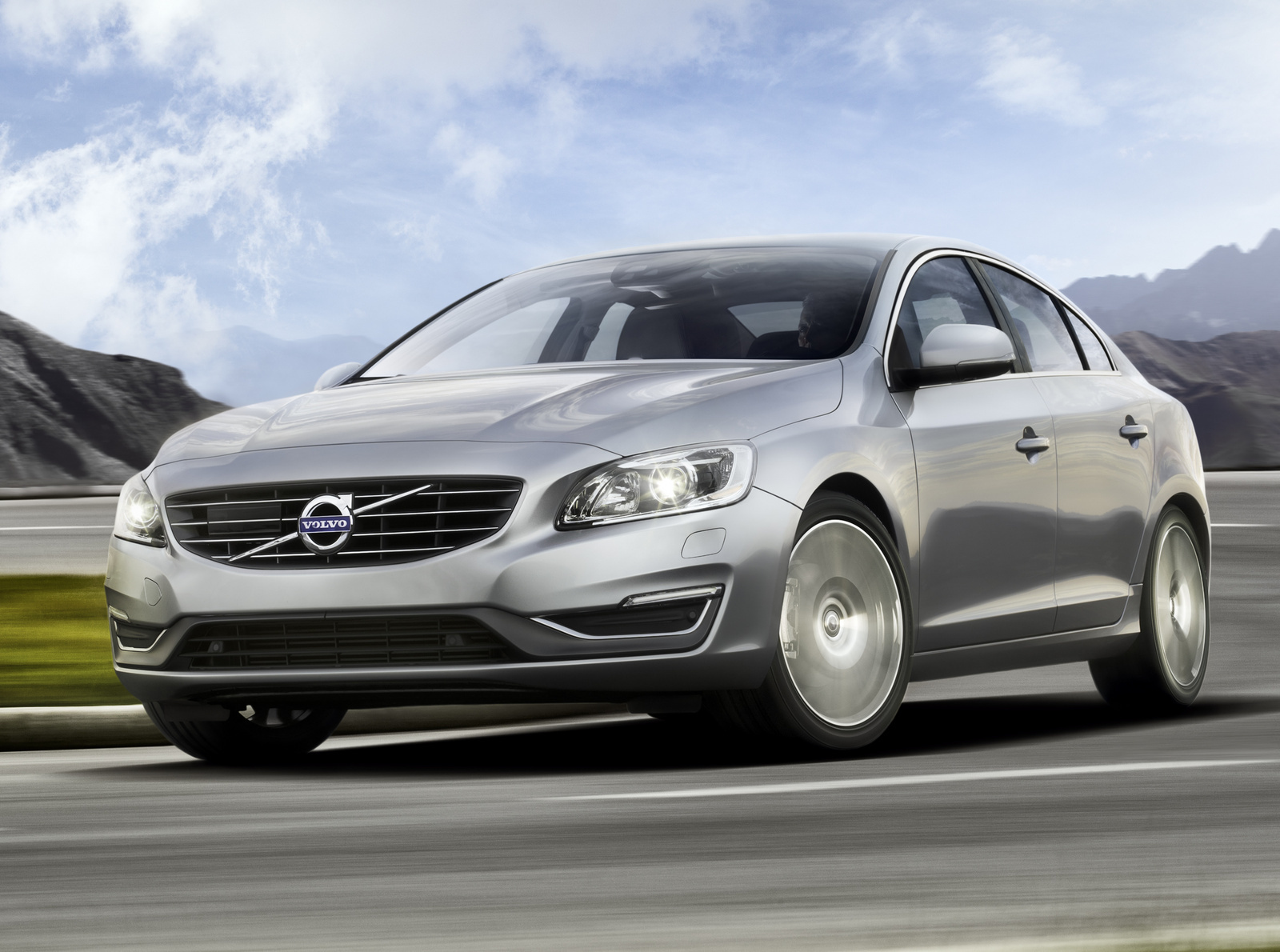 In the uber-competitive luxury sport sedan segment, long-time status symbols from BMW, Mercedes-Benz and Lexus have ruled the roost. However, for buyers willing to expand their horizons and consider something a little different, the 2014 Volvo S60 holds the power to surprise with its style, performance and comfort. Top-notch safety remains a given. 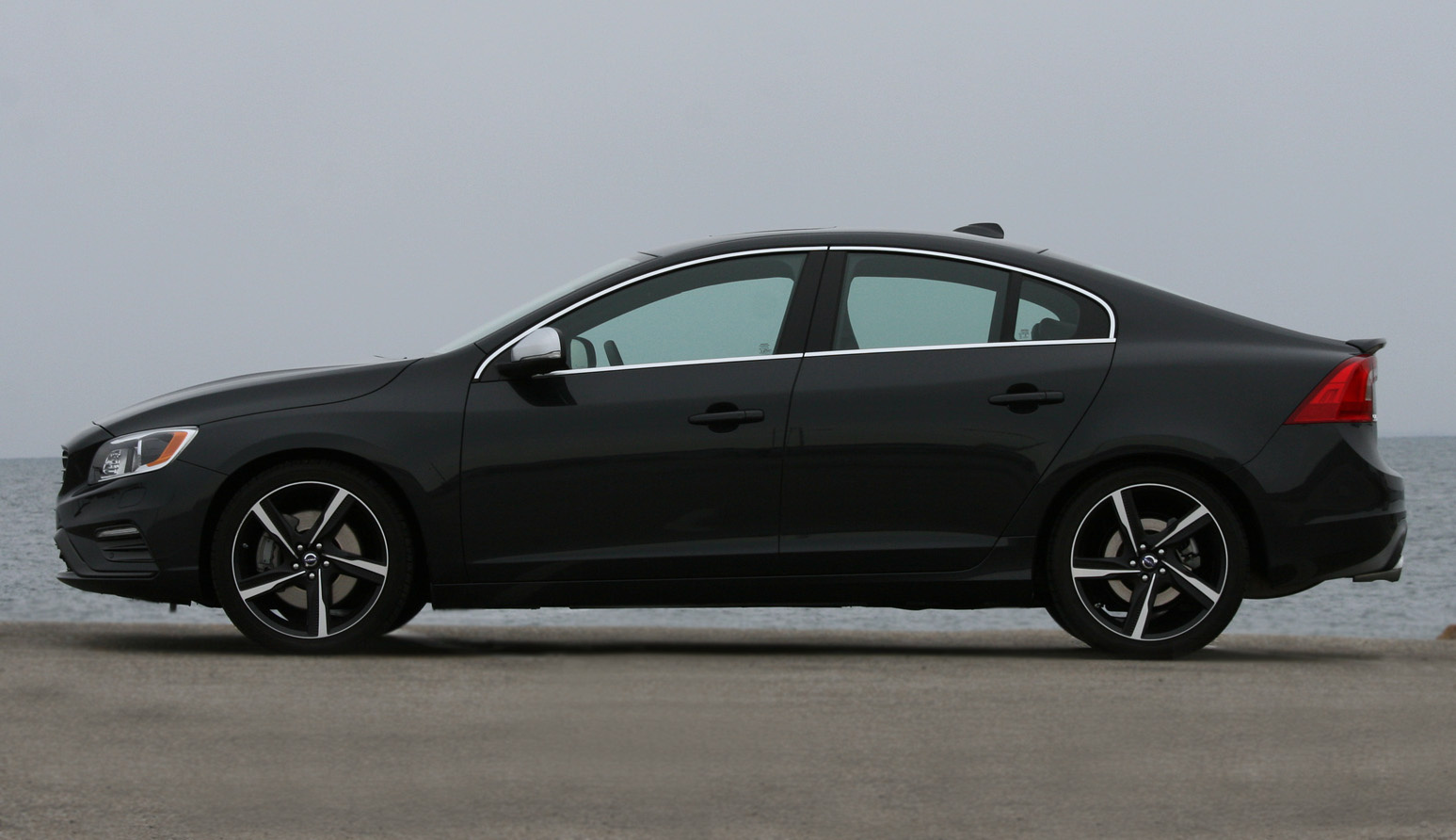 As a car-crazy child of the ‘70s and ‘80s, I still find it odd to describe Volvos as anything other than boxy, safe and boring. In my young mind, they were the Swedish equivalent to Oldsmobiles—but like my grandmother’s Delta 88 wagon, not a highly coveted 442 convertible. However, much has changed in the decades since Nana ruled the highway in her massive baby-blue hauler, not the least of which is Volvo’s approach to vehicle design. Perhaps the best example of the dramatic transformation is the 2014 S60 sedan, a sleek 4-door that’s been updated with a revised front end, premium interior bits and, in keeping with the brand’s core values, new safety features. A cool and desirable Volvo? It’s something the 10-year-old me would’ve never imagined.

One step above the base trim is the 2014 Volvo S60 T5 FWD Premier, which offers upgrades like a push-button ignition, moonroof, leather upholstery and power seat adjustment for the front passenger. The T5 FWD Premier Plus goes a couple steps farther by tacking on a standard universal garage door opener and a rear-view camera, while the T5 FWD Platinum ventures even deeper into creature-comfort territory with a navigation unit, 650-watt premium Surround Sound audio system and auto-dimming exterior mirrors.

For this evaluation, Volvo handed me the keys to an R-Design Platinum model fitted with 19-inch alloy wheels and tires; a Blind Spot Information System Package consisting of a blind-spot monitor, cross-traffic alert, lane-change merge aid and parking sensors; metallic paint and heated front seats. With a $915 destination charge factored in, the as-tested price came to $49,315. 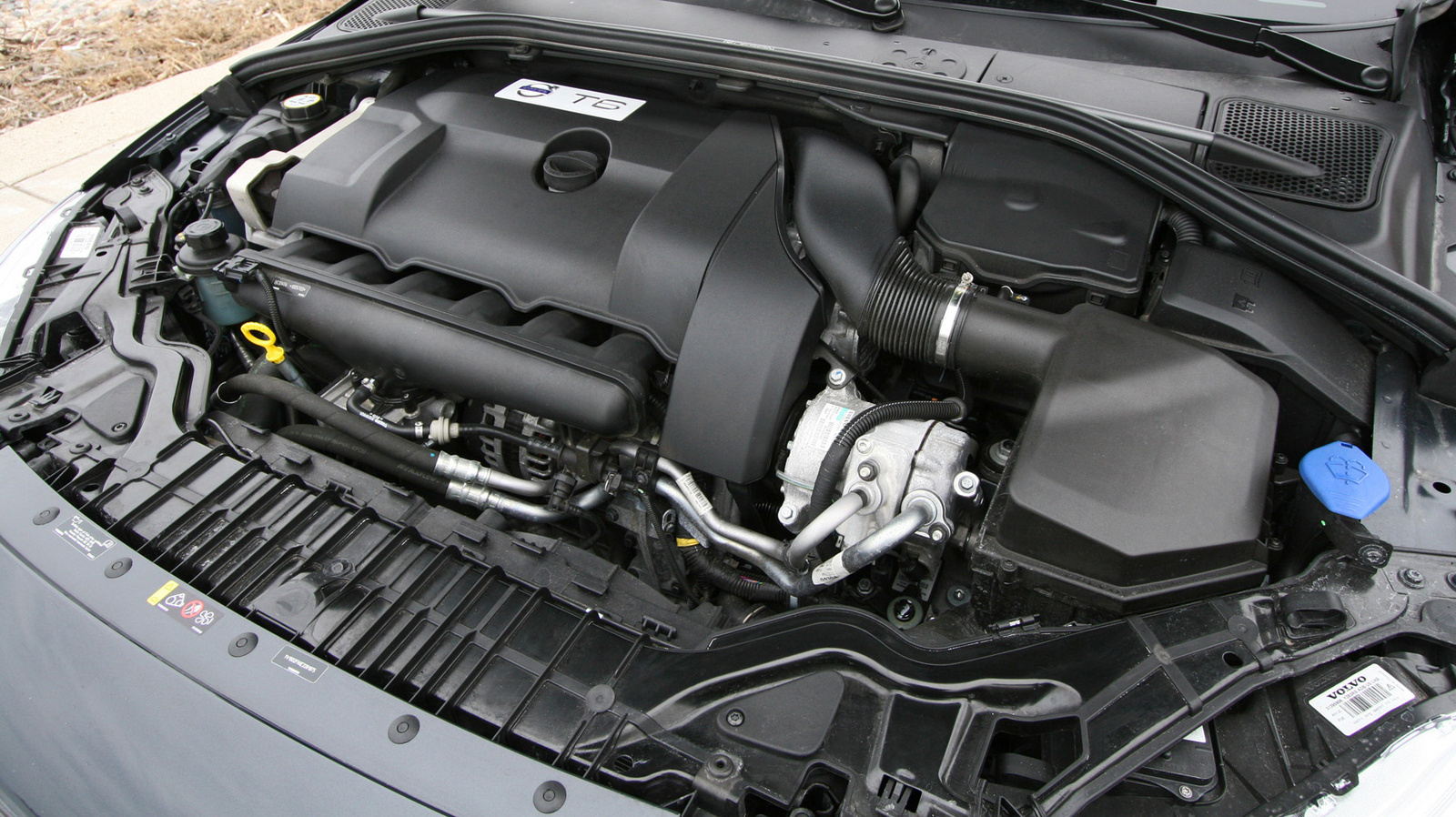 To see the primary difference between S60 trims, you’ll need to take a look under the hood. For the T5, that area is home to a turbocharged 2.5-liter 5-cylinder that’s good for 250 hp and 266 lb-ft of torque, output that’s directed to the front wheels via a 6-speed automatic transmission. Drivers can expect 20 mpg in the city and 30 on the highway. Thankfully, Volvo has engineered all S60 engines to run on regular-grade gasoline, so there’s no need to spend extra money on premium fuel.

In addition to standard AWD, T6 variants up the ante with a turbocharged 3.0-liter inline 6-cylinder boasting 300 hp and 325 lb-ft of torque. The same powerplant is utilized in the S60 R-Design, though it has been retuned to deliver 325 hp and 354 lb-ft of torque. Larger front brake discs complement the extra ponies.

According to the EPA, the more impressive 3.0-liter engine should average 18 mpg around town and 25 mpg while cruising at steady speeds on the freeway. I recorded 23.8 mpg in my R-Design tester, despite running all 325 horses ragged on more than a few occasions. In regular Drive mode, the 6-speed gearbox worked with the engine to offer up excellent throttle response; power felt abundant as the car pulled hard whenever I rolled on the gas, while unwelcome torque steer and turbo lag remained absent. Clicking into Sport mode made the pedal almost too sensitive, and as a result I found it difficult to accelerate smoothly (drivers can shift manually by using paddles on the steering wheel or tapping the gear lever). Aside from that minor issue, the R-Design’s powertrain was just flat-out fun to play with on seldom-traveled back roads, doling out ample grunt accented by a hearty exhaust note that was audible yet not annoying or intrusive.

During those entertaining jaunts, I’m glad to report the brakes proved highly effective, suffering no fade or shuddering even after repeated heavy application. Body roll was kept well in check, though not completely eliminated, while the ride was firm but not uncomfortable. The S60’s steering, on the other hand, was a bit hit or miss. On upper-level trims like my R-Design Platinum, drivers have the option of selecting their preferred resistance—low, medium or high. Problem is, changing your setting is a pain in the rear cheeks. Instead of a switch you can tap on the fly, Volvo requires drivers stop the car, hit the MyCar button on the dash and then make your choice. Adding to the already high level of annoyance is the fact that these settings aren’t speed-sensitive, meaning the heavy resistance that proves to be very desirable when driving fast and aggressively continues to serve as the default when you eventually roll into congested traffic or a parking lot, where lighter steering would be much preferred. Because of this bothersome setup, I generally opted for the low setting, which was suitable for the highway but less desirable on twisty secondary roads. 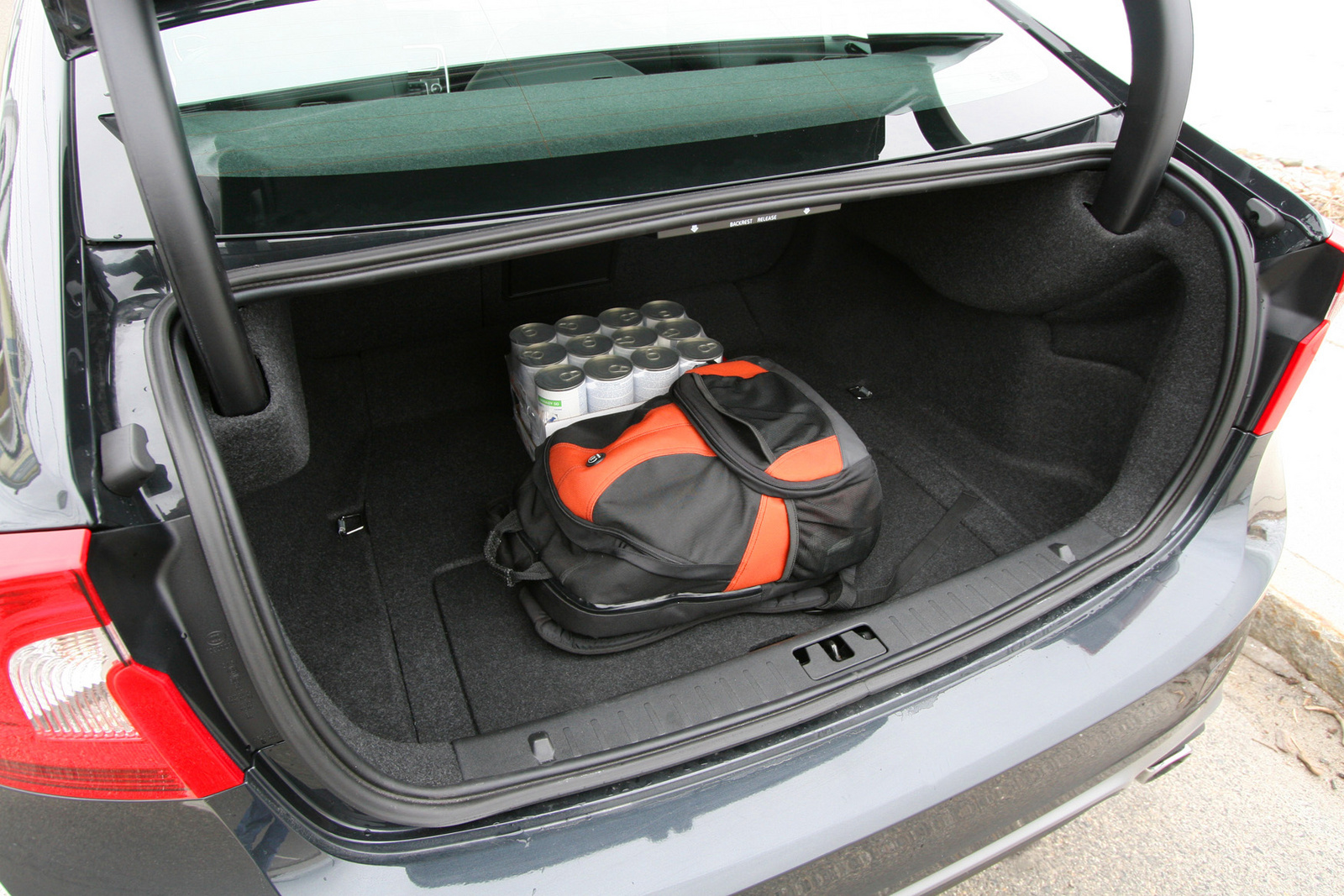 Among the few changes made to the 2014 Volvo S60 is the introduction of more upscale interior materials. Indeed, the cabin is nicely appointed with a mesh fabric on the headliner and visors, padded surfaces on the door and upper dashboard, and soft leather on the steering wheel and seats. Hard, seemingly durable plastics are reserved for lower panels and more inconspicuous areas. Storage provisions are sufficient, if not abundant; the 12-cubic-foot trunk is on the small side, though it does offer a low liftover, wide opening and a handy divider, and it can be expanded by lowering the rear seatbacks. Inside, designers have incorporated various pockets as well as a front armrest cubby within which you’ll find auxiliary and USB ports.

In terms of comfort, the R-Design’s sport buckets feature considerable side bolsters that proved quite capable of keeping me firmly planted when cornering at high speeds, yet didn’t leave me fatigued after long stints behind the wheel. Standing 5’8” with an average build, I was as happy as a pig in mud, but larger individuals might feel a bit squeezed. The optional triple-setting heated-seat feature can be programmed to turn on when the S60 is started, something that’s a selling point for those of us in colder climates.

Accommodations for rear passengers are similar, with cushions set at a natural recline angle. Headroom is generous, and thanks to curved front seatbacks, I was granted decent leg room. However, taller riders will definitely wish for more space, and folks of all shapes and sizes won’t be thrilled with the limited foot room. 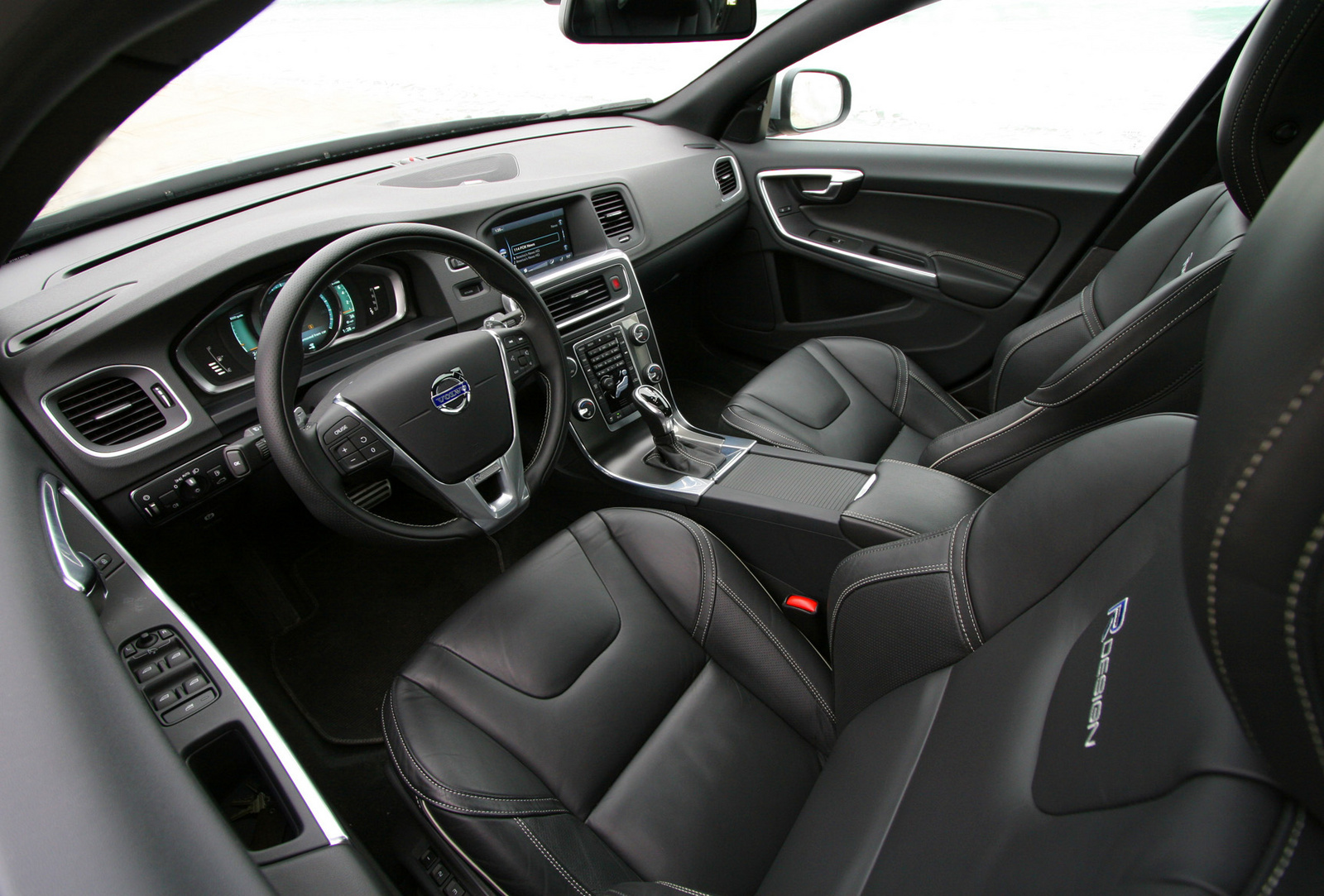 High-tech gadgetry in many decked-out models can be overwhelming, with once-simple commands—like changing the climate control’s fan speed—lost in an abyss behind a central control dial. It can be electronic candy for some and a migraine-inducing nightmare for others.

Volvo aims, and generally succeeds, at finding a compromise. The S60's climate controls are about as intuitive as you could hope for, buttons are large and well-labeled, and the gauge cluster is modern without being too busy or complex. The 7-inch display screen sits atop the center dash; unfortunately, it’s not a touchscreen unit, but it sits too far back to be easily reached anyway. Controls are laid out on the instrument panel and include Media, Tel(ephone), Camera, Radio and MyCar, among others. You simply tap the appropriate button and then rotate a dial to make a selection on the screen. No Tylenol or Advil required.

That said, I got a bit confused when trying to pair my iPhone with the car. Logic would suggest I select the “Tel” button to start the process, but instead I needed to select “Media” and then direct the system to add a device. After several attempts, and being directed to put my phone in discoverable mode (it was), the setup worked. 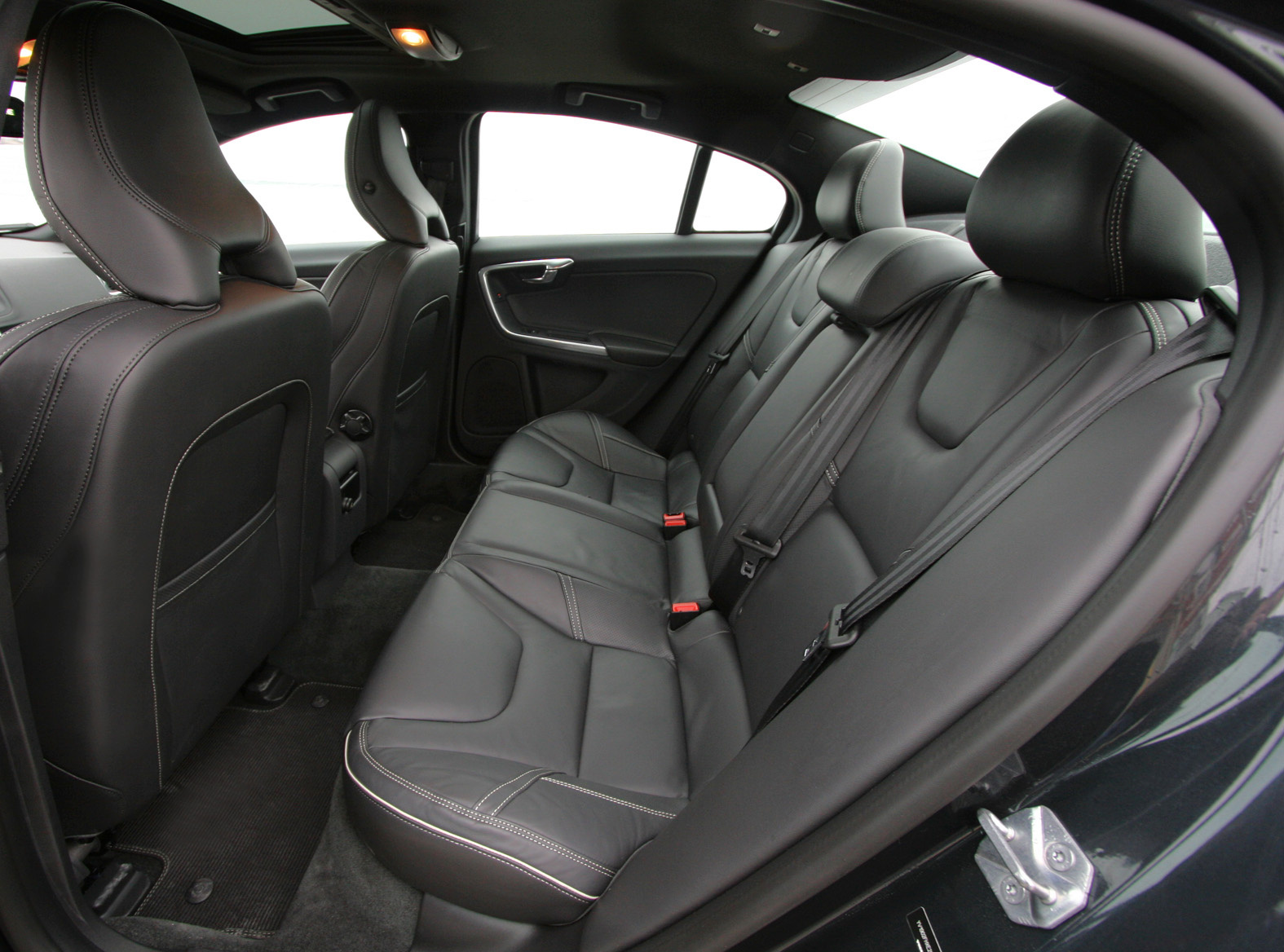 When it comes to safety, you can’t ask for more than what the 2014 Volvo S60 delivers: 5 stars in all National Highway Traffic Safety Administration (NHTSA) tests and a Top Safety Pick+ designation from the Insurance Institute for Highway Safety (IIHS). That’s like a student earning a 4.0 GPA plus bonus points for an extra-credit assignment.

To get those results, Volvo engineered a strong passenger compartment and loaded up the S60 with a multitude of airbags, ABS and more. In addition to that is a slew of safety-oriented options, such as intelligent cruise control, forward-collision warning and full auto brake (capable of bringing the car to a complete stop), pedestrian and new-for-2014 cyclist detection, road-sign information and the Blind Spot Information System Package. 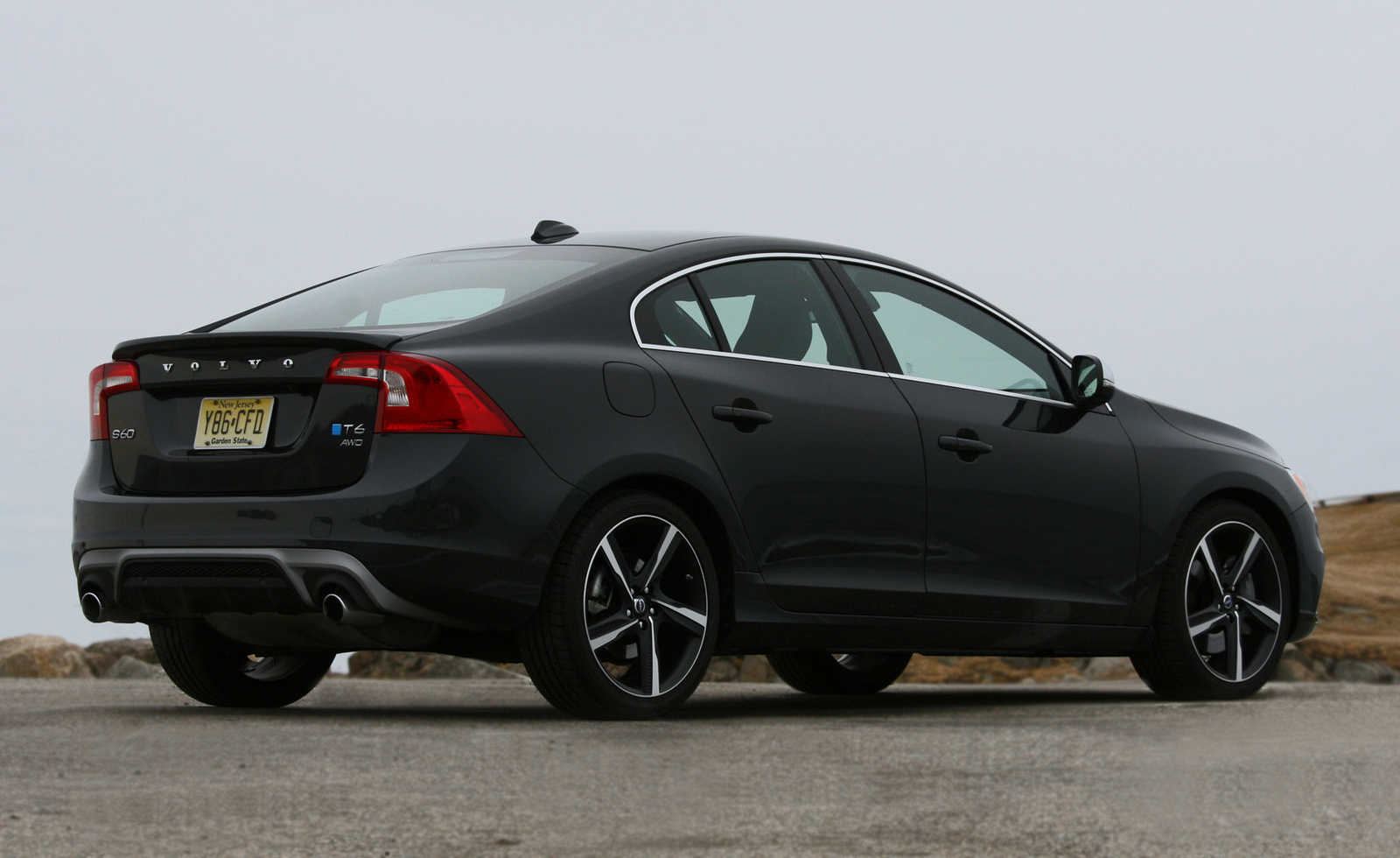 In an effort to win over fans of its hot-selling German and Japanese rivals, one might assume Volvo would consider playing the value card by enticing buyers with greater bang for their buck. In reality, that’s not the case. Granted, the S60 offers a slightly lower base price than many of its competitors (nearly $5,000 less than the Infiniti Q50), but the Audi A4, for example, compensates for the difference by adding standard leather seats and a power moonroof. At the other end of the spectrum is the loaded R-Design, which is hundreds of dollars more than a comparable A4 or BMW 3 Series sedan. Of course, relatively strong resale values would work in the S60’s favor when trade-in time rolls around, but in this regard the Volvo actually lags behind the A4, 3 Series, Q50, Lexus IS 250 and Mercedes-Benz C-Class.

Fuel economy is another element to consider in the cost-effectiveness conversation. With EPA estimates of up to 30 mpg on the highway, the S60 is hardly a gas guzzler, though it is less efficient than the 36-mpg BMW 320i and, not surprisingly, the 34-mpg Infiniti Q50 Hybrid. Even the regular Q50 nearly matches the S60’s EPA ratings, despite utilizing a V6 that puts out 328 horses and 269 lb-ft of torque.

Infiniti also has an advantage with its 6-year/70,000-mile powertrain warranty, as does Cadillac, which backs its ATS and CTS sedans for 5 years or 100,000 miles. Audi and BMW limit their powertrain coverage to 4 years or 50,000 miles, though the latter sweetens the deal with free maintenance for the same term. By comparison, Volvo stands behind the S60’s mechanical bits for 5 years or 50,000 miles and provides no-cost factory-scheduled service for 3 years or 36,000 miles.

According to J.D. Power and Associates, relying on a warranty shouldn’t be much of an issue for S60 owners, as they’re expected to benefit from above-average dependability. Consumer Reports’ reliability prediction is a little less glowing, yet the publication’s editors have nonetheless added the 2014 model to their list of recommended vehicles.

firestick50 So whatever happened to the electrical fire problems of the 70s era Volvo wagons. I never got over that as I saw it personally 6 times

Volvo Dealership replaced my entire engine under original manufacturer's warranty. What is the Warranty on the new engine and would a fuel injector be covered?

Looking to buy a 2012-2014 S60 T5 or T6 2WD, but have seen many issues reported regarding transmission problems and engines that burn excessive oil after 50,000 miles. I almost bought that was super c...