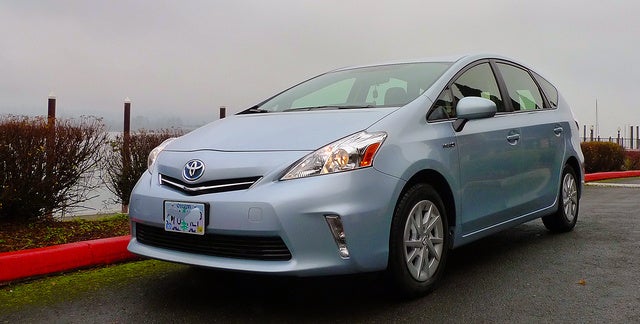 Toyota's stylish wagon hybrid enters its third year much like its first two, if not for a couple of small details, in anticipation of a major 2015 refresh. For 2014, the Prius V will cost just $100 more for the standard addition of daytime running lights on all trims, and the panoramic moonroof already available to the upper tiers is finally available to the Prius V Three trim as a standalone option. Otherwise this V is the very same well-balanced hauler you already know and adore.

The Prius V is still front-wheel drive only with the same continuously variable transmission (CVT) choreographing its 1.8-liter 4-cylinder gas engine teamed with an electric motor and nickel-metal hydride battery pack for 134 horsepower and 153 lb-ft of torque. It still has the downside that it cannot operate on electric alone—it is not a true electric car—but fuel economy is a fairly impressive 44 mpg city/40 highway.

The Prius V is definitely function over form, however, with a zip-to-60 mph sprint taking well into 10 seconds. The cabin is an obvious continuation of this theme with user-friendly controls and generous storage compartments, though quality is inconsistent; some plastics are nicely grained and others are cheap looking. Features are about the only thing not lacking inside—indeed, so many features are jammed into the Three that its dash is decidedly cluttered trying to fit in Entune and everything else under the sun. If you need more seat adjustments than height, expect to opt up to the Three.

Drivers say the ride is smooth and comfortable and the V gets up to speed in an acceptable manner. A power mode is available for better acceleration in demanding situations, while an Eco mode maximizes fuel economy. Compared to the hatchback, the Prius V feels more substantial and stable on the road thanks to a heavier curb weight.

The next-generation Prius promises to compact these batteries and electric motors somewhat, perhaps even with a bit of a power boost, but few details are available just yet. In any case, it's pretty safe to figure on about a 10% increase in fuel economy and maybe a couple extra ponies under the hood for both a lighter overall weight and improved performance. New "advanced safety technologies" are reportedly joining the feature set, too.

Specifics on the future of Toyota's usual Prius V Two, Three and Five trims were about the furthest from the official priorities you could get on a single tank (ok, maybe not all 550-some miles), but rumor has it the V just might get some pure-electric range at some point—just not likely next year. Sure, there's some really interesting tech in the works for a wireless charging system, but nothing points toward the V getting any of that tech in its 2015 redesign. Unless of course, this "2015 redesign" is for the 2016 model year, in which case Toyota should have those new engines raring to go.

Have you driven a 2014 Toyota Prius v?
Rank This Car

How Long Does It Take To List My Car