The Prius C is a more affordable, more city-friendly means of staying within the Prius family. The “C” in the name stands for “City,” but it might as well be “Compelling.” 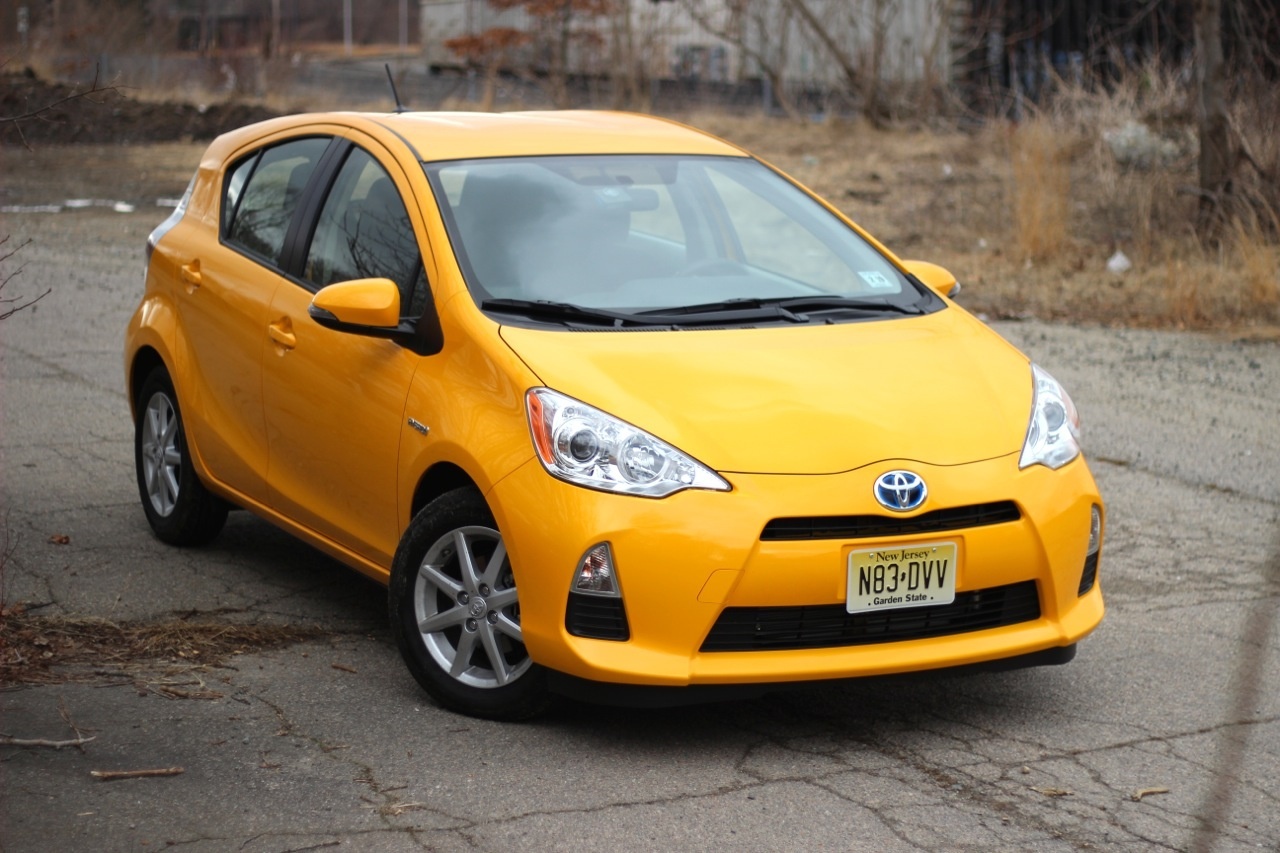 The Toyota Prius family is growing. The iconic hybrid has been so successful Toyota has seen fit to expand the Prius into a multi-vehicle sub-brand. It still lives under the Toyota name, but has expanded to several uniquely Prius–ey vehicles. The first variant was the Prius V, which is a larger vehicle that took on more of an MPV/wagon shape when it went on sale in the U.S. in October 2011. As you might have guessed the, “V” stands for “Versatility.”

In March of 2012, the family grew again, but this time by going smaller. The Prius C is a subcompact hybrid, based on the same platform as the diminutive Toyota Yaris. But the Prius C features the namesake drivetrain and more attractive and fun packaging. The Prius C is a more affordable, more city-friendly means of staying within the Prius family. The “C” in the name stands for “City,” but it might as well be “Compelling.” 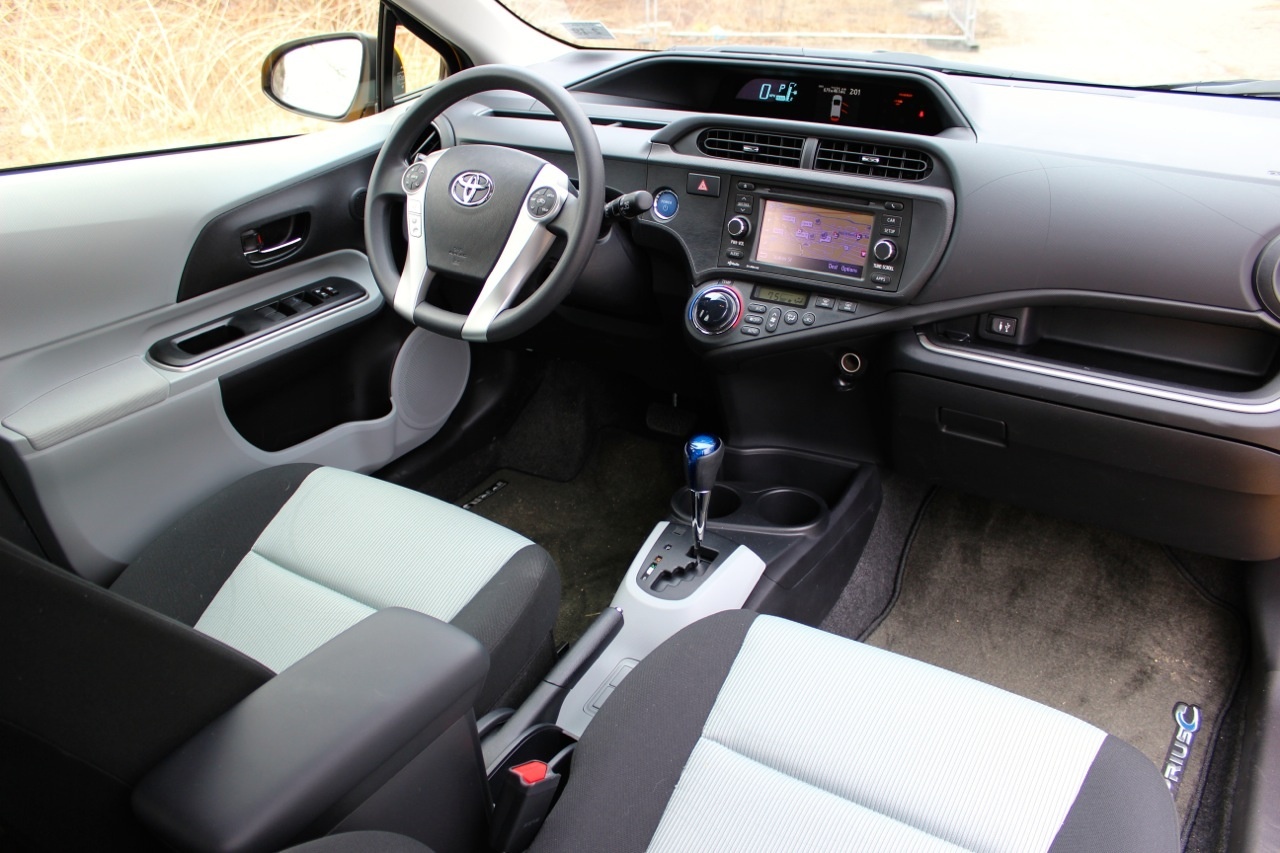 Beauty is in the eye of the beholder, but from where I stand, the Prius C is much more fetching than the Yaris. The Yaris has Toyota’s current “samurai/street fighter” design language, while the Prius C has an upbeat look. The “Sun Fusion” exterior color of the one I tested helps keep things happy, too. It looks like if you got in a fender-bender, it would make OJ.

The interior makes good use of space, but I’m not in love with the layout. Not the seating layout, nor the unorthodox controls layout. No, the problem here is one of the most obnoxious choices automakers tend to make when their vehicles are “quirky”—it's the center-mounted gauge cluster.

Rather than putting the speedometer and trip computer in front of the driver’s eyes, where a normal human being would look, Toyota has seen fit to place the speedo in the center of the dash. This is nothing new, but on the big-brother Prius, the driver has the advantage of a head-up display, which presents key information on the windshield. The Prius C does not have this feature, thus drivers are forced to look to the center of the dash while driving.

Elsewhere, the Prius C has a modern and minimalist aesthetic. The lamentable instrument panel flows down into the center console, which is asymmetrical and driver focused. It is anchored by the large volume knob and touch screen.

Like the punchy styling, Toyota keeps trim packages quirky, too, opting for simple numbers instead of trim names. With destination and handling, the base One trim starts at $20,285 and comes standard with Bluetooth hands-free calling, a fold-down rear seat, USB audio port and remote keyless entry. The Two starts at $21,235 and adds a 60/40 split-fold rear seat, fetching two-tone seat fabric and a center-console armrest with a storage compartment. Our Three test trim started at $22,970 and came equipped with a touchscreen navigation system, Toyota’s innovative touch-tracer display and push-button start. The top of the line Four starts at $25,415 and adds fog lights, SofTex heated front seats and 15-inch alloy wheels. 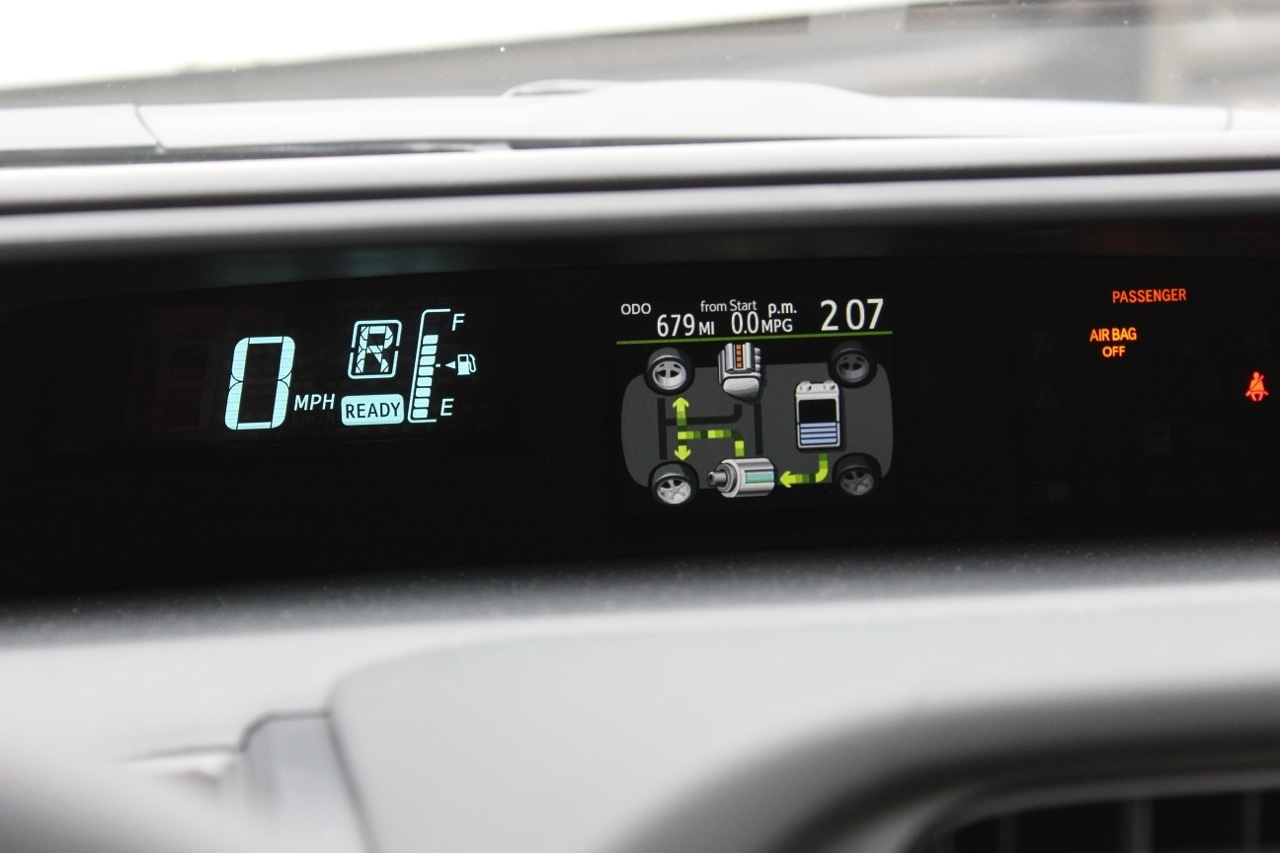 When it comes to hybrids, performance is not measured in 0-60 times, top speeds or lap times. Nor is it measured in fuel economy alone. The question is whether or not the vehicle can move you around in an acceptable manner while delivering the advertised high mileage. And the answer is… maybe?

The gas engine makes 73 horsepower, and the electric motor makes 60 hp, but total output is not a matter of simply adding the two. Both motors work in varying combinations of output, and as such, the total output is rated at 99 horsepower. This drivetrain also weighs 88 pounds less than that of the standard Toyota Prius.

Most drivers will not care how the hybrid drive works, nor will they be able to explain it to their friends while picking out quinoa at Whole Foods. The only thing they need to know is the Prius C achieves 53 mpg city/46 highway. Because of the added power stored from regenerative braking, fuel economy is actually better in stop-and-go driving.

The EPA lists combined fuel economy at 50 mpg, but there’s a catch. In order for one to get that fuel economy, one has to drive like Miss Daisy is in the back seat. Those who are already Prius converts will be fine with this, praising the fuel economy numbers as they pull away from a stop sign with the faintest sign of haste.

Those who drive compact cars know that one has to drive with the pedal down often to get anywhere as fast as a normal car. For the Prius C, this means fuel economy will drop closer to 46 mpg in combined driving. 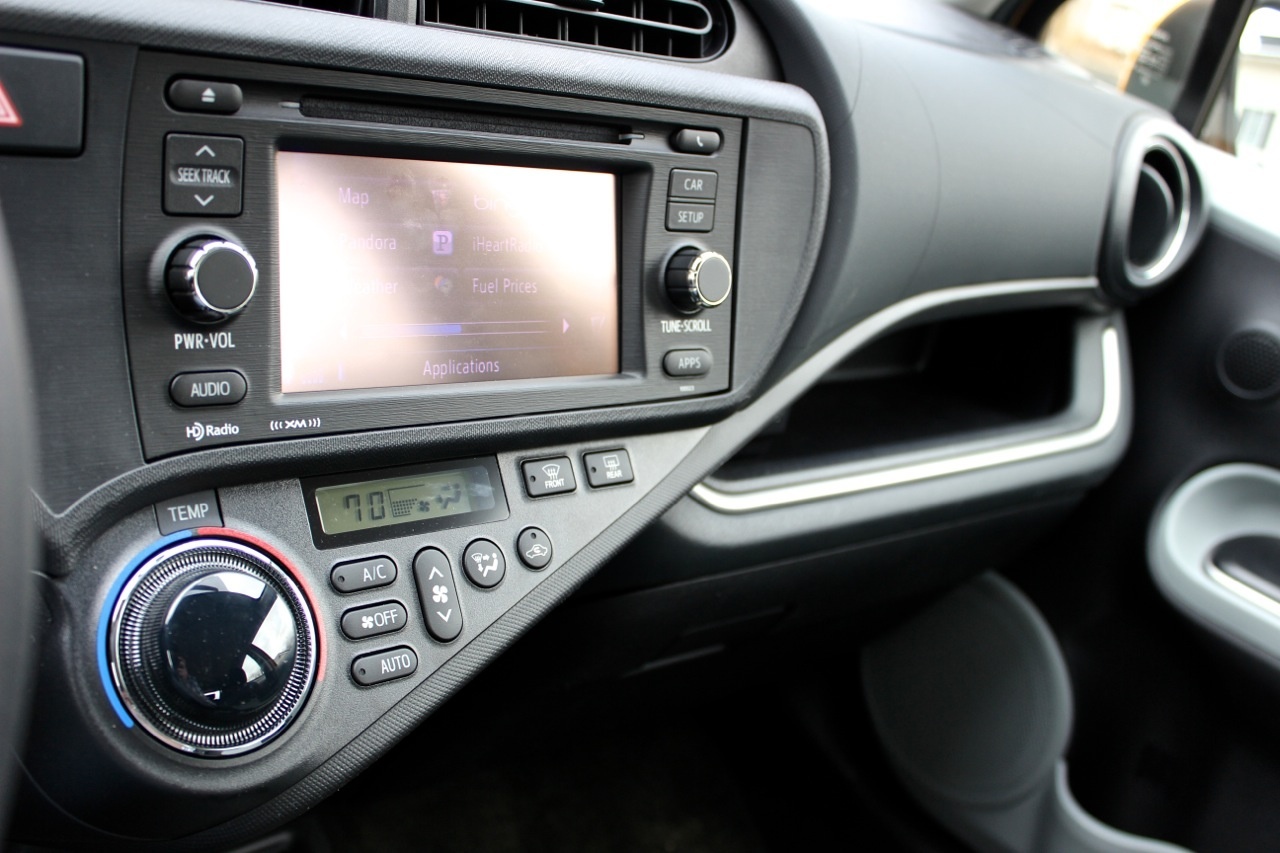 The Prius C makes the best of its limited space. This writer’s 6-foot, 3-inch frame was able to live with the compact hybrid for a week, though good luck trying to sit behind me. When driving with someone in the front passenger seat, elbows often connected. This vehicle is really meant for personal commuting use, and adding folks and gear should be a rare weekend occurrence. 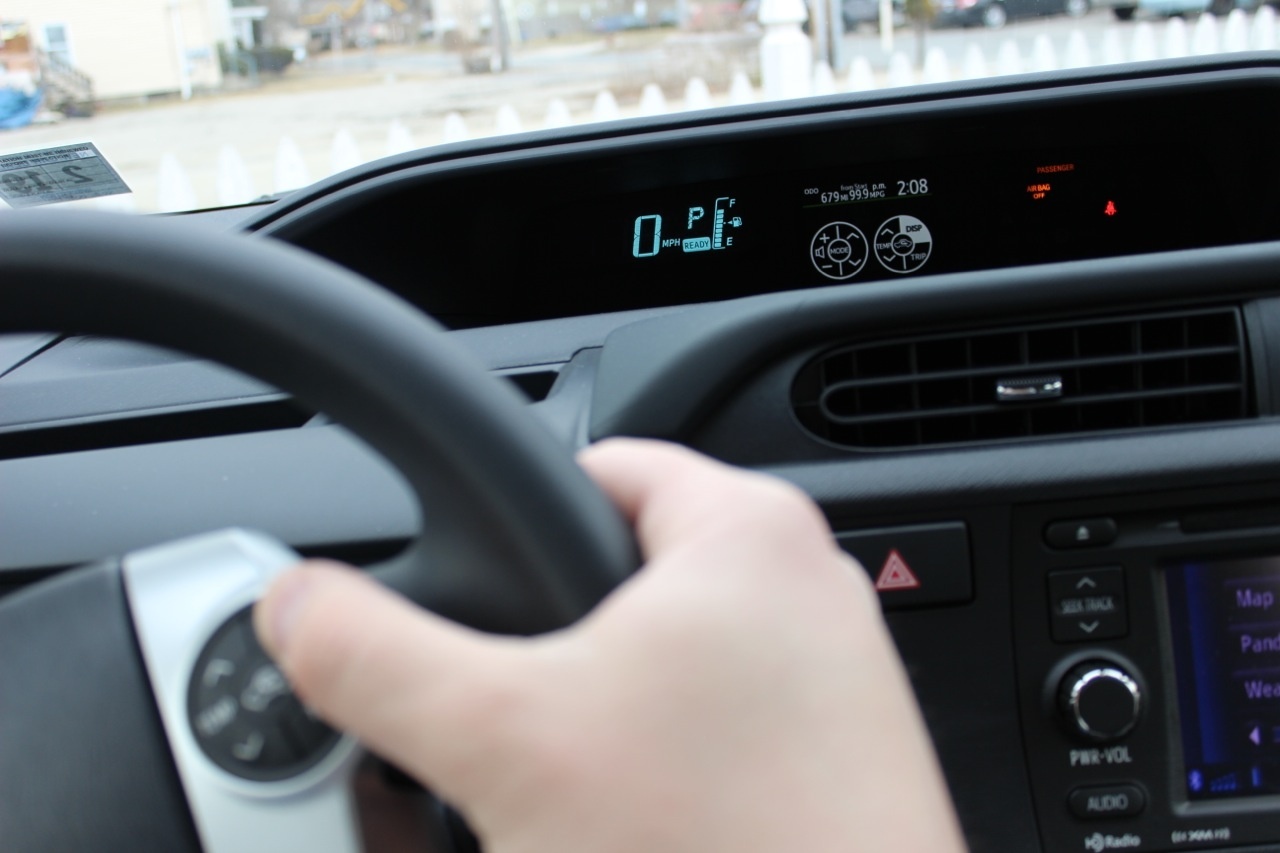 One of the Prius C’s best attributes is its smart use of technology. We’ll get to the navigation and apps suite in a minute, but first we have to talk about the steering-wheel buttons….

The two circular banks of steering-wheel controls are touch-sensitive and connected to the trip computer. Rather than having to look down at the steering wheel, you can turn to the dash display and confirm that your thumb is, in fact, on the “down volume” button, rather than the “up volume.” It is the second immensely confusing thing about the Prius. Why is this feature not in more cars in the Toyota lineup? This would be huge value-add for a car like the Camry or Corolla. The first confusing thing is obviously the instrument panel.

Luckily, Toyota’s suite of Entune apps have our attention. The touchscreen navigation system came standard in our Three trim. The 6.1-inch screen contains all the basics like stereo and settings, but also has apps like Pandora, iHeartRadio, weather reports and web searches through Bing. Our test model also has advanced voice recognition, which could understand complex commands for calling and navigation. 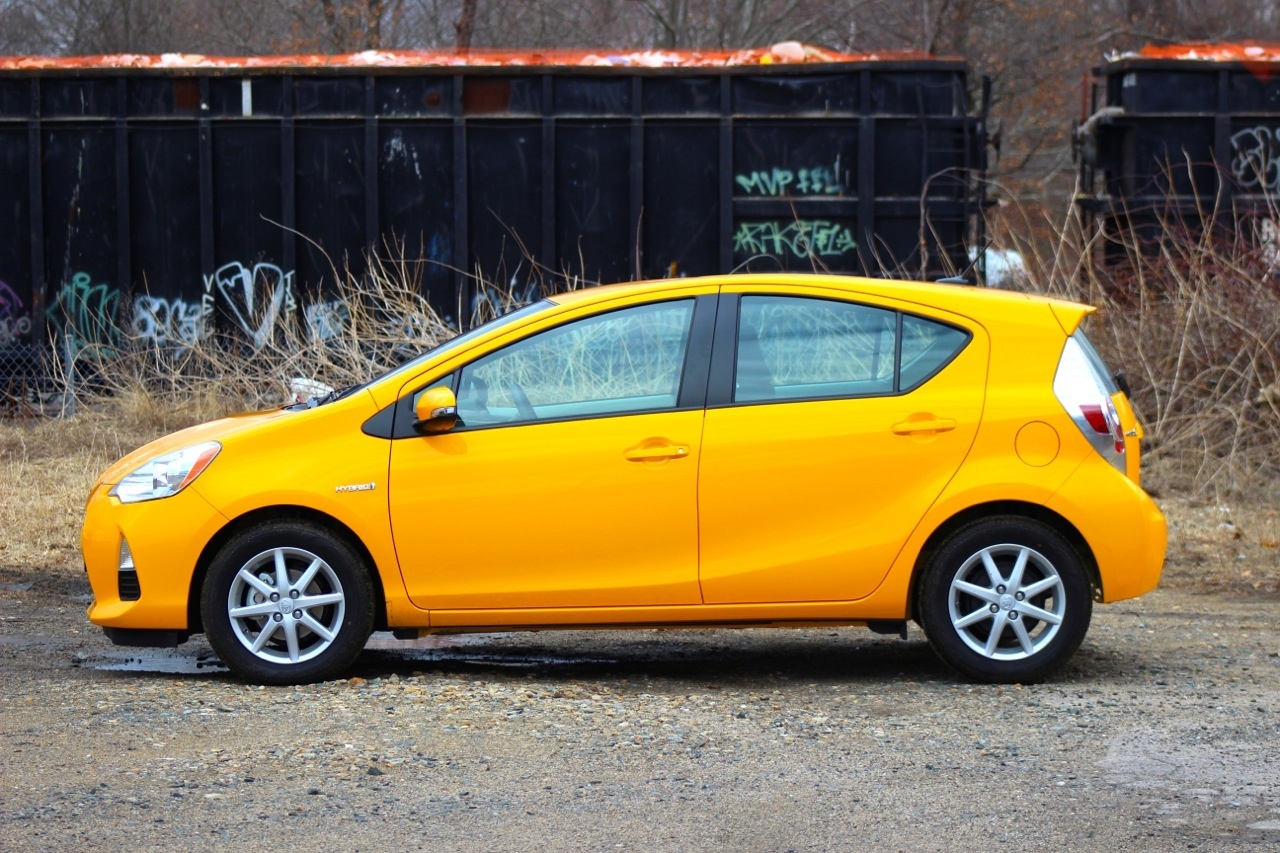 For a small car, the Prius C is big on safety. Nine airbags are standard, including front and side impact airbags, a driver's knee airbag, and front and rear side curtain airbags. The Prius C scored 4 out of 5 stars in overall government safety testing. This included frontal crash, side crash and rollover tests. Given the focus on lightweight construction and diminutive proportions, this is a respectable outing for the Prius C.

One safety knock on the Prius C is its sight lines and lack of a backup camera. This little hatchback body has a very upright rear, which means there is a potential blind spot for low objects behind it. That is in addition to the car's large C-pillars (the part of the body between the second row doors and rear window). It would be far better if this vehicle had a standard backup camera. 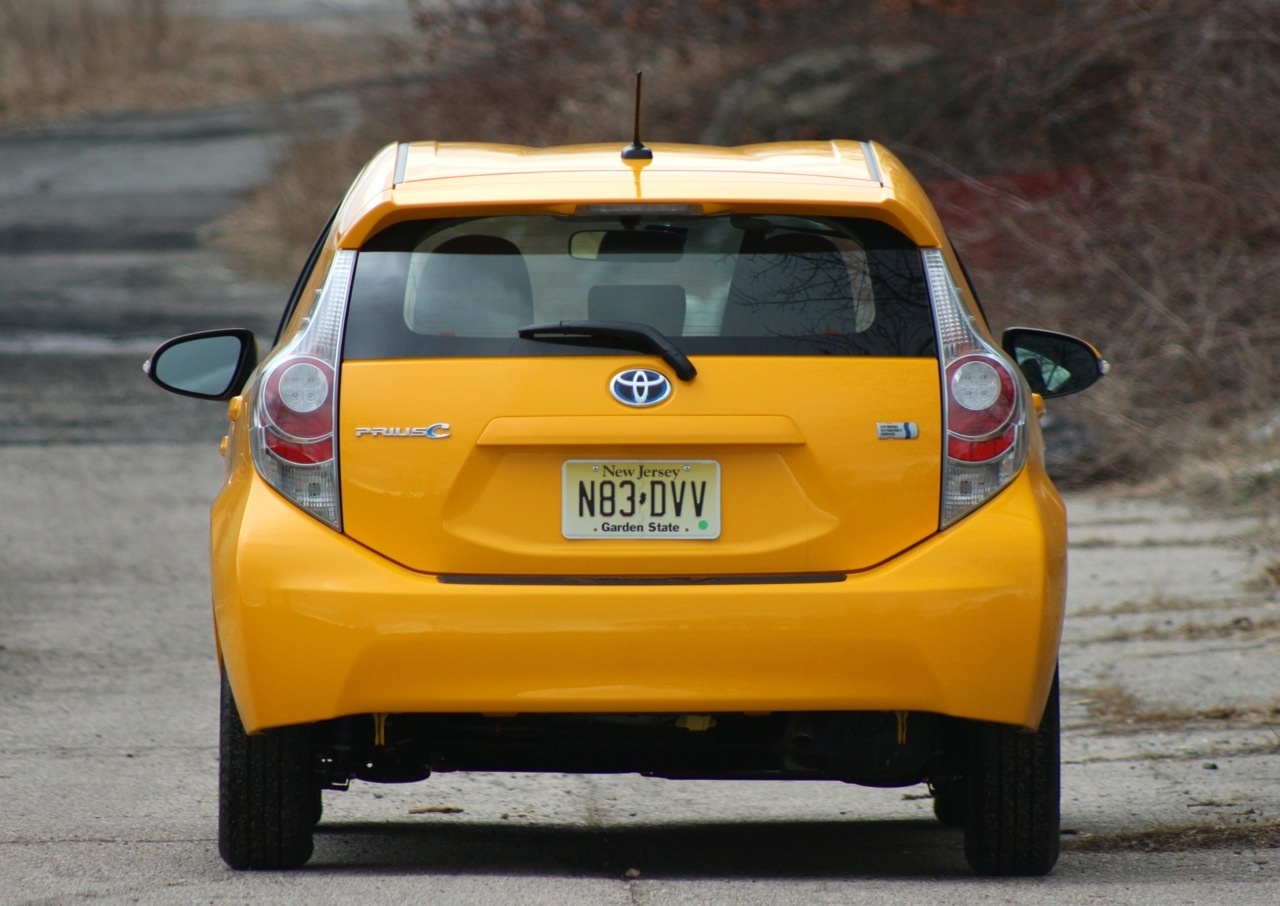 The math with the Prius C all comes down to fuel consumption versus new-vehicle price. According to the EPA, a Prius C driver's average annual fuel cost would be $1,050. That is a claimed savings of $6,250 compared to the average new vehicle. (The EPA’s math is based on 45% highway, 55% city driving, 15,000 annual miles and current fuel prices.)

But buyers would not be shopping this against the average new vehicle—they'd be shopping it against other fuel-efficient compacts. The Toyota Yaris is expected to sip $1,600 worth of fuel in a given year, just $550 more than the Prius C.

Our test model with several options clocked in at $23,318. Other hybrids might cost about the same, but compared to the conventionally powered subcompacts, it is hard to find the immediate value in the Prius C. It would take years of driving like a church mouse to see the savings in fuel costs. Meanwhile, the world is passing you by at average highway speeds.

The Prius C is for someone looking to make a statement. On a larger scale, this is why folks buy the Tesla Model S—the facts and numbers can be spun in different ways, but there are sacrifices to ownership. If you live in the city, or have another primary vehicle, the Prius C might be the way to go. Otherwise, there are better, cheaper, more efficient options out there.

stefster41 had mine for less than one month, a PC-2; i bought it for fuel efficiency and it works! yes, it has slow pickup, but if one bought it for fuel efficiency and "gauge-watching", then i accept it; when my mpg shows up at 60 mpg, i enjoy the leisurely, relaxing ride all the more. up to the individual, but for fuel economy, i like it; sound system is great; seats are very comfortable and with back seats down, the hauling ability is adequate for my needs. so far, im happy......

Vanessa I just bought a 2014 prius c a few days ago. Is the MPG meter supposed to show any number over 53 MPG? The highest MPG i have seen on my prius is 99. Is something wrong with my car? Should I file a complaint? Thank you!

Users ranked 2014 Toyota Prius c against other cars which they drove/owned. Each ranking was based on 9 categories. Here is the summary of top rankings.

Have you driven a 2014 Toyota Prius c?
Rank This Car

Do you think a prius c (2014) can make a road trip from Seattle to St. Louis this December?

Is It Still A Good Car?

Bought a 2014 Prius C Three, 51,000 miles, single owner who leased for three years. Consumer Reports said they could not recommend it. Am I screwed or will the car serve me well, for $13,000?

Cost To Install Backup Camera On My Prius C?

Prius C 2014 Smart Key For More Than One Car

Hello. I have two prius c cars (both 2014). I have a smart key for each car and I was wondering... Can I have each smart key open BOTH cars? I mean is there is a way to program the smart key to ha...

Hi Mark I have a 2014 prius c and my Bluetooth on the car turns of randomly. How do I turn it back on?